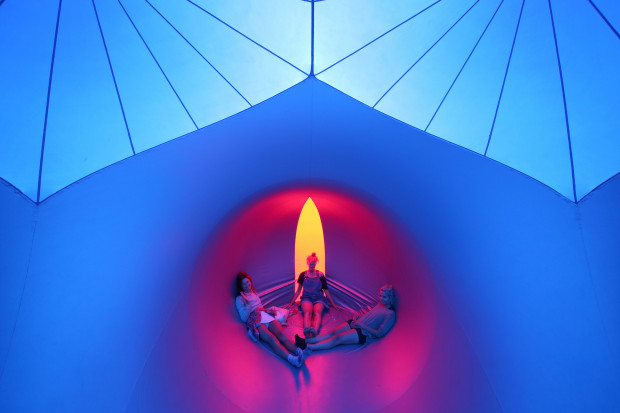 6 Ways To Get More From Your MOFO

The Museum of Old and New Art (MONA) only hosts a couple of MOFO events. Go anyway. A Hobart cab driver told me he’s yet to meet anyone who didn’t like it.

MOFO is a great time to go because artists get free entry and all head over too. Hey, you might get your fanboy/fangirl moment retching in front of Cloaca Professional alongside your idol. (That’s the digestive machine that eats and produces faeces like a regular human. Smells terrible.)

I wonder what Michael Gira from Swans thought of the Cloaca Professional? (Photo: Matias Corral/Image courtesy of the artist, and MONA FOMA 2015)

Don’t catch the bus – MONA is cool but you can take or leave the suburb of Berriedale. Catch the camo-printed MR-1 ferry. Hell, get a fruity champagne in the “posh pit”. Live a little.

#2 Check the BOM before you pack

Like, really. Not just to see if you should bring a cardie – we’re talking potential to pack a proper coat and scarf. MOFO may happen in mid-January but a cold snap in Hobart is serious biz, even in summer. We ran into bands buying jumpers in op shops because we were too. The wind blew this baby down. (Photo: Derek Tickner/Courtesy of MONA Museum of Old and New Art, Hobart, Tasmania, Australia)

It dropped to nine degrees one night, got so windy one day that they deflated the inflatable luminarium, and pretty much every time the sun came out it rained too (actually, that was pretty cool). The nighttime fun was in a big ol’ shed with doors that didn’t close and a concrete floor. So check the BOM or risk rolling with the layered look from your friends’ spare clothes.

If you do get stuck, there’s an awesome Retro Vinnies at 212 Argyle Street full of vintage clothes at op shop prices.

Hobart’s CBD is close to the waterfront, where lots of events are held, and close to the Odeon Theatre where the Faux Mo after-parties are. But proximity aside, the CBD just has lots of chain fashion stores and Reditellers. If you’re OK with daytime buses and nighttime cabs then stay out of town. It’s a small city so a 20-minute walk will see you in awesomely cute South Hobart, nestled under Mt Wellington in some quaint cottage accommodation.

North Hobart has the “gourmet strip”, a great Indian restaurant called Annapurna, and loads of heritage B&Bs in original mansions. We even saw a robot lawnmower beavering away on a lawn and you just don’t get that in the CBD kids. Extra tip? Stay somewhere with a self-serve breakfast so you can eat it at 3am after Faux Mo. Or 3pm the next day. Whatever.

MONA gets some pretty big names but you can always get a barrier position. Maybe it’s because Hobartians are like Darwinians and super laid-back? Or because they know in six months Dark MOFO will roll into town and they can go barrier then? Or maybe it’s because they’re too busy dragging around MOFO’s signature beanbags to cuddle up on the concrete like they’re at A Day on the Green? Here’s the low down. Bands play the same massive shed on stages at opposite ends. When one acts ends, the other act starts, and everyone about-turns and walks back like they’re chalking up long, slow runs on a massive cricket pitch. So bail ten minutes early and get there first. Festivals don’t have encores anyway.

#5 Check out some smaller venues

There may be a map on the app but one MOFO venue – Spring Bay Mill – was so off the grid this year that even the organiser didn’t know where it was! Mysterious mills aside, there are plenty of interesting venues, galleries and nooks within walking distance so sweat out the previous night’s merriment and check them out.

We walked to a small gallery in South Hobart called Constance Ari and saw some of our favourite stuff. Where else can you find Australian trees listening to recordings of New Zealand trees in an art work reflecting on how trees were once used as wirelesses? Also, we had our photo taken by a hacked Nintendo to a soundtrack by a hacked Game Boy. #6 Choose your own Faux Mo adventure

Look, they’re all fun as hell. But if you’re on a budget, the Thursday and Sunday Faux Mo after-parties are less crowded and the acts a bit edgier. On Saturday, especially, all the Hobart wildlife come out – bless them – making some of the postage-stamp-sized rooms that seemed so cool the night before feel a little…small. Whatever night you go, take a break from the main room for the labyrinth at the back. We partied on fake grass near a dance floor as fun as a fire-trappy Sydney warehouse which then spilled into what looked like a gleaming Hungarian disco. And we had to part some membranous white cloth to get back there in the first place. Yep.