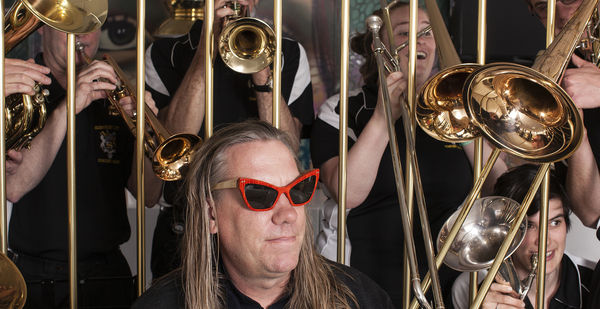 A spectacle of sound and silence: MOFO 2015

From the maelstrom mustered by rock band Swans to the serenity spread by Adam Wojcinski’s tea art, MONA FOMA excelled when foraying the fringes of quietness and noise and the space between spectacle and sound. Part I (Wednesday, Thursday and Friday)

Each year MOFO offers morning meditation shows at Hobart’s Bahá’í Centre. While lubricating the inward-swivelling eye of early risers and non-boozers is not exclusive to MOFO, festivals that do it are often held in paddocks west of Woop Woop with sessions at a cruel shade of dawn.

MOFO knows better. Also responsible for chucking after-parties called Faux Mo that drink and slink into early morning, it schedules its meditations at 10am as achievable antidotes to the depravity.

Adam Wojcinski and Allan Halyk are not Taoists but ‘teaists’ – robed practitioners of a 450-year-old Japanese tea ceremony called chado. “There are only about eight avant-garde tea artists in the world but it’s growing,” Wojcinski says.

As it should. The Zen men kneel to perform a tea duet that is like modern dance, but old; like a musical duet, but silent. The room is stilled by the ceremony’s grace, allowing ambient noise to amplify such as the scrape and dong of utensils on ceramic and iron. “I’ll be at MONA tomorrow with a basket on my head begging for alms,” Wojcinski says when it’s over.

The benefits of open-minded attentiveness resonate long after. MOFO’s array of hushed tea events function as aural palette cleansers helping us appreciate the festival’s numerous works of sound art. In a sandstone gallery on Salamanca Place is Johannes S. Sistermanns’ artwork: cling wrap stretched between beams, emanating sound. Ultimately it is more arresting for eyes than ears. Richer works are found at a small South Hobart space. There, New Zealand artist Sally Ann McIntyre is onsite to discuss the phonographic wax cylinder she is displaying, featuring a piano recording of the call of a long-extinct New Zealand bird, the Huia. Nearby, a Game Boy blips away. It is soundtracking a work by Alex Bishop-Thorpe which is a hacked Nintendo photographing the gallery and its guests, the ghostly images coiling in a pile below.
MOFO’s signature installation is an inflatable luminarium called Exxopolis made by the UK’s Architects of Air. What could be a jumping castle from outside is a revelation from within, light penetrating its plastic shell to create canyons of colour and curves. Similes spill from people who wander it – “It’s like being in a 3D model of a molecule!”— and transfixed toddlers slide around the walls. Barefoot and lacquered in blues and reds, surrounded by yonic shapes, Jim Moginie’s Electric Guitar Orchestra plays music that melts into the luminarium – all gestures, shades and texture. Better still, the womb-like space manages to transplant six guys on guitars into a feminine context.

Speak Percussion understand that spectacle is an often-overlooked element in experimental music. Their show begins on the stage at Princes Wharf with a guy swinging a microphone in circles, feedback screeching in its wake and manipulated in surround sound by laser master Robin Fox. The theatrics continue with microphones tapped, smacked, brushed and dusted but the sight can’t save the sound from being crude, unpleasant and too similar to the feedback wreaked by amateur musicians. A parting salvo of a gong rubbed by a mic is wonderful, however, and an excellent segue into Ben Frost’s electronic assault.

The Iceland-based Melbourne musician views dance music through experimentation’s prism but what can feel academic on record is visceral live. It helps he is so present in the performance: shoes off and swaying to crunching metallic beats that noisily decay. Frost’s set has no gaps so his grip rarely loosens and strobes, smoke and LED lights pound us, everything white, icy and too bright. The show closes with gargantuan bass blasts separated by spellbound silence, each one rattling the ceiling and rippling the water beneath. Frost gathers his slippers, bows and is gone – the set of the night.

Swedish black metal band Marduk formed in 1990 to be the “most blasphemous band in the world”. They blaze out in leather pants and Marduk tattoos, freshly dunked in the nearest swamp. But even ghoulish face paint, thrash metal guitar and rapid-fire kick drum will lose its punch unless the band truly blisters: and Marduk does. Despite this, a somewhat dazed crowd looks on with metal-heads glowering few and far between. I wonder how Marduk feel about blasting their filth and fury into this boutique beer crowd until deciding they probably relish the chance to preach (Satanism) to the unconverted.
Jim White is best known as The Dirty Three drummer and Giorgos Xylouris as the most recent in a line of famed Cretan lute players. Together they are Xylouris White, a duo that brings the breeze of a warm Mediterranean night into the chilly shed – evocative of olives, ouzo and a clutch of Euros in your pocket as you dance. White’s idiosyncratic drumming is all flurries and rolling expressiveness, reaching fiery heights previously doused by The Dirty Three’s downer vibe and, together, the two concoct a cacophony through cohesion and musicianship alone.

‘Hammer Time’ jokes are traded in advance of Chinese artist Li Binyuan’s performance piece. Sitting on a concrete platform, Li’s task is to smash 250 hammers using, well, a hammer. Whether appreciated as a glorified wood chop or a comment on mass production and disposability, hundreds of onlookers rouse him on when he droops, supporting him to the end, cheering to the bitter twang of hammer on hammer.