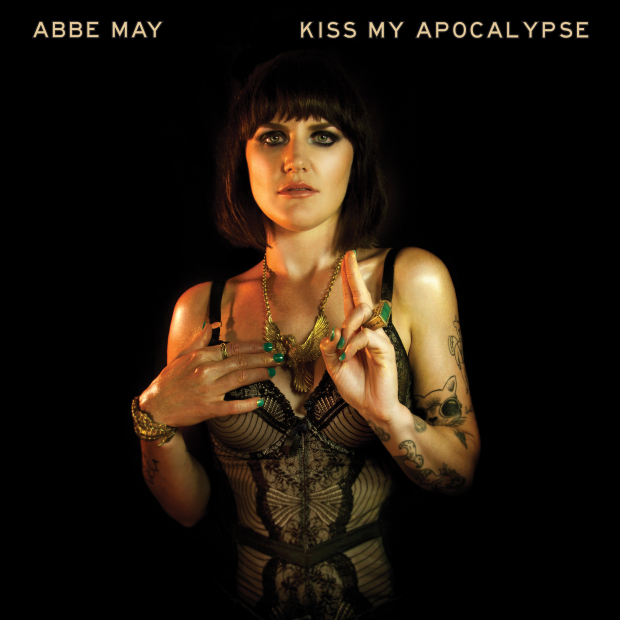 Abbe May – KISS MY APOCALYPSE

Late one night at Sydney’s Annandale Hotel, as a hard-liquor-swilling Abbe May stomped along the bar-top playing one of those riffs from 2011’s AMP-nominated record Design Desire and slaying it, I heard a guy say: “I want old Abbe. I want swampy Abbe back.”

Laying claim to which ‘bits’ of an artist we like, and don’t like, is pretty normal. But something in me bristled when I heard his judgment and saw his face, furrowed in distaste. You don’t get to make the decisions, I thought. You don’t get to choose which slice of this woman is served up.

I hope he returned to his peephole at the closest swamp. He’ll need to make some room there, because if Design Desire saw some fans of May’s earlier bluesy material lumbering back to those origins, Kiss My Apocalypse will send them there in droves. Synth-driven, highly processed and levitating miles above rock ‘n’ roll guitars, Kiss My Apocalypse is so far from the swamp it’s a Manhattan penthouse.

In the months approaching release, May launched a pre-emptive strike to flush out fans nurturing singular attachments to her guitar. She told her Facebook following, “If you want guitars, go and listen to Queens of the Stone Age.” And the press release reads, “Abbe May doesn’t care if you are offended by the lack of guitars in this album.” Though there is guitar – at its best on ‘Tantric Romantic’, where it’s sharp-toothed and untamed, with static-frayed edges and something of Robert Fripp’s metallic tone. Elsewhere, though, guitar is bit player amongst Mellotron melodies, string effects, a drum machine and May’s voice doing everything else.

My reaction to the swamp-lovin’ guy represents what I’ve grown to like most about Abbe May. She’s strong, talented, irreverent and sexual; aspects of being a woman that are so rarely role-modeled in a holistic way that I want to defend her against comments that are so irritatingly reductive.

Increasingly, she muddies the male gaze by using feminist theory to influence her covers and clips. The cover of Design Desire – where she stands in a black bra holding a cow’s skull to her head – was shot by philosopher Toni Wilkinson, who introduced May to critical thinking about women’s representation in art and media. The cover of Kiss My Apocalypse is a play on Freud’s Madonna/whore complex. “I posed as the iconoclast Mary while using my sexuality as a way to combine the Madonna and the whore,” May told me. “A woman is not either pure or evil. She is complex.”

She is indeed. In the video for ‘T.R.O.U.B.L.E’, a group of buff women emerge from a pool and, later, wearing rags and chunky jewellery, they scale cliffs and thunder along a beach in slo-mo, yelling furiously in what resembles a Daenerys Targaryen-inspired boot camp. “The women in the ‘T.R.O.U.B.L.E’ video are not afraid to be menacing,” May said to UK website Female First. “Their beauty lies in their strength and their strength is amplified by working together to overcome a rather large obstacle [that] looks a lot like a cock.” Cool! But the video could relay that message sans the full-frame shots of boobs, bellies and thighs. And doesn’t the idea of ‘trouble’ coupled with barely-clad babes on a beach reinforce stereotypes of the femme fatale? See? It’s complex. But May never claimed to be a poster girl purely for feminist pop. That would just land her in another box.

Pop music is May’s current inspiration – her first words are on Kiss My Apocalyse are “Singing along to the cheesy love songs/Madonna, Timberlake, Rihanna and K-Pop.” It would follow that ditching the blues muse and aspiring to a mainstream pop aesthetic would leach her authenticity. The opposite occurs. The blues may be regarded as a timeless expression of the human experience, but it’s also a grumpy ol’ grandpa of a genre, burdened by broom cupboards stuffed full of archetypes and clichés. By snipping ties to the blues’ ground-bound earthiness, May’s self-expression can – and has – soared, and she’s transmitting more personally than ever.

Sex blares out everywhere. It’s on the cover, in the songs and made explicit in the song titles (for the dummies). May addresses her Facebook fans as ‘minxes’ and boasts that her music is a soundtrack for lovemaking. On a hand-signed record she wrote “I don’t give a fuck who you fuck as long as you’re a good fucking fuck” and she’s a vocal advocate for marriage equality, saying to Out in Perth: “As long as it’s consented and moral, who gives a fuck what’s between their legs? It’s all love.”

She’s my type of moral compass. So why do I wish she left the music to do the dirty talking? Because I fear the sexual freedom bit might get lost in the sex bit – no fault of hers. How many of her male fans assume she’s into women to get them off? Sadly, I reckon, a lot. Facebook comments like “God damn I hope my sperm count’s ready for this album!” aren’t hopeful. Still, when a woman sings shamelessly about her own hungers and, crucially, not in an effort to be hungered for, it’s worth popping a few corks.

When the music does the seduction, its touch needs no translation. ‘Tantric Romantic’ oozes heavy-lidded sleaze from every beat, breath and guitar break. It also serves up this deadpan diss – “Like when he said I couldn’t make the scene/And I replaced him with a drum machine” – which (in my head) is followed by boisterous cheers and applause. Even better? The drummer is no straw man. “I like to write my own songs and I don’t particularly want to be pushed around,” May told Time Out. “It seems like with most drummers that situation comes to a head … I’ve been through five drummers since about 2008.” Knowing this, the drum machine’s pert serviceability is all the more endearing when compared to the revolving door of tantrumming Neanderthals we imagine preceded it.

Though it’s not just the fellas in May’s crosshairs. The album is spiced by references to lovers past and present, male and female, with the bulk of the bitterness reserved for love with a lady gone awry. “She said I’d never find better/But I replaced her later on with … someone better, better, better,” she drawls, making rebound sex actually sound sexy.

Singing along becomes involuntary. Well, not singing exactly. On ‘T.R.O.U.B.L.E’ May yelps; on ‘Karmageddon’ she moans; on ‘Napalm, Baby!’ she intertwines with a synth line and on ‘Perth Girls’ she hoots “I must tell you-oo-oo-o, I want you-oo-oo-o” in a feast of vowels you can only mimic with a caricatured pout. Co-writer and producer Sam Ford (also producer of Pond’s Beard, Wives, Denim) brings May from matte to high gloss but keeps the mood tense and dusky with the structure of ‘Perth Girls’ slanting at unsound angles, synths just off-key.

‘T.R.O.U.B.L.E’ is enjoyed exponentially with volume. It may be threadbare but play it loud and it’s all-encompassing. Flickers of other mighty performers are fanned into life, with May’s exhalations on ‘Napalm, Baby!’ summoning Laurie Anderson while ‘Found Somebody Else’ could be Annie Lennox at her forceful best.

‘Karmageddon’, meanwhile, explores a sideroad of sex rarely detoured down. If you’ve ever wondered why people have affairs, the answer could be here, as the song communicates a sensation of surrendering to something illicit and, while sex should be about choice, it can also leave you with none. Lyrically, it’s a fascinating mix between direct (“I’m your secret/You’re my worst friend”), metaphorical (“I know the water will support the whale/Though some girl always has hold of the tail”) and all-out fury (“I drunk you like a Coca-Cola when I should have stoned you”). Soaked full of regret, sodden with inevitability, the vocals lean into each other like velveteen dominos. The carnal was never so uncomfortable.

Unlike the crop of girlish-sounding singer-songwriters Australia keeps harvesting apace, May’s music draws on her strength, not her fragility, without diminishing in honesty. She’s as much about women’s tough reflective surfaces as our soft centres; about grasping the moment in favour of contemplating it. As for lust, well, while it’s assumed women will sing instinctively about their emotions it’s extraordinarily satisfying to hear someone sing about all the times they – we, us – have acted devoid of them.

For all those who’ll desert, more will come. Kiss My Apocalypse is May’s best record so far and also the most likely to succeed commercially. And her hands-free stance fits her new image perfectly: divas don’t sling axes. Yet.