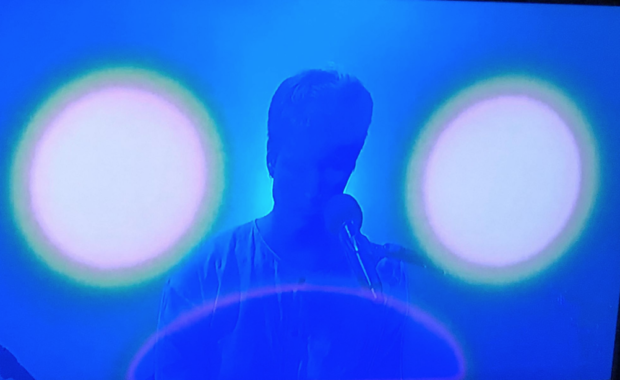 Curating concerts to suit the zeitgeist is hard right now. A month ago, with our cities in stasis and our moods unusually malleable, Alaska Orchestra’s performance of Brian Eno’s Music For Airports from 1978 would have resonated well. Now, with restrictions lifting and political protests on high boil, a sense of urgency prevails, and Eno’s famous ambient composition has to work harder than the minimalist piece was ever designed to. “It must be as ignorable as it is interesting,” Eno wrote in the record’s liner notes.

The players move slowly so as not to disrupt the music’s serenity with any expressions of their own. They are subtly performative, radiating the altruistic air of holistic health practitioners, which suits Eno’s original intention to diffuse the anxious undercurrent of airports.

If the audience was at the Joan Sutherland Theatre too, the sound alone would be enough, especially as the celestial choral parts of 2/1 begin. But we’re not. We’re watching on laptops or televisions at home. Enter the transfixing live video art of Carla Zimbler, which elevates the concert not only to the next level but to hitherto unexplored worlds, with her nostalgic sci-fi aesthetic the conduit to a time when the idea of outer space – and probably inner space too – was indistinct, yet full of hope.

Zimbler’s shape palette is one of metamorphosing orbs, obelisks and concentric circles, encasing colours you’d struggle to name. If she claimed to be a synesthete who could see sound, you’d buy it instantly.

Sometimes, the intersection of form and wondrous colour is earthbound: a cross-section of quartz crystal held to the sun, perhaps, or the yonic shape of a leaf or a flame. Elsewhere, it channels the mystic hues of an aura portrait, the glow of an alien encounter or the paintings of German American artist, Agnes Pelton, heralded last year by the Whitney Museum as a “visionary symbolist”.

Best of all, though, is that the visuals seem beamed from some liminal space between the stage and our screens. While live-streamed events have been a cultural lifesaver (for audiences, anyway), they’ve largely settled for mimicking “the real thing” until normality resumes. This collaboration was different; exploiting the potential of the streaming medium itself and breaking new ground.