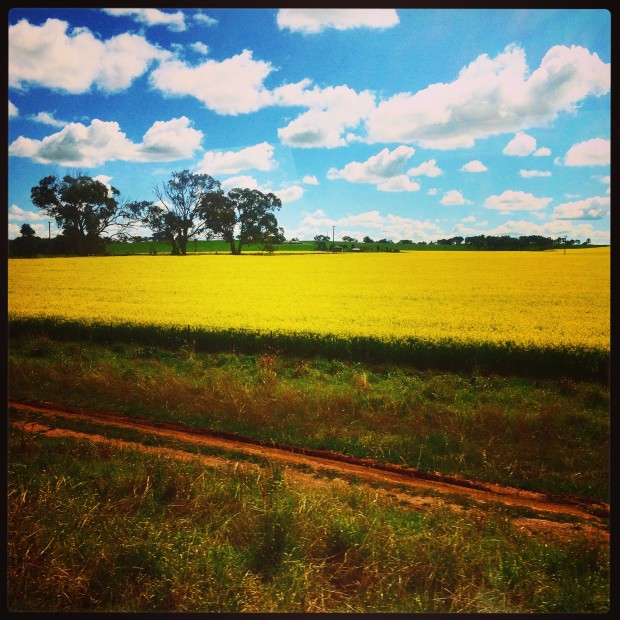 All aboard the train to Broken Hill Three hours into a 13-hour train trip through the Central West of New South Wales, warm scones with jam and cream are like fire-cooked camping food. Almost the best thing you’ve ever tasted.

They’re served in the dining car of the Broken Hill Outback Explorer by an attendant who barely needs my order. “Scones, love? $6.” I must have scones written all over my face.

They’ve certainly been on my mind since boarding the short three-carriage train at 6am where the country-style cordiality begins while still at Sydney’s Central Station. I’m too late to check my baggage (you need to arrive 30 minutes early) but the woman arranges it anyway with a kind of long-suffering charm. The train guard ushers me politely to my carriage even though I see later it’s printed right there on the ticket.

I’ve been to Broken Hill twice – once by car, once by plane – but have always yearned to take the train. To weave up and over the Great Dividing Range, to see the landscape flatten and redden and to see each of the 1150 kilometres tick by between Sydney and the famous Silver City.

TIP: Skip the train breakfast and hold off for the scones. Mine were available at about 9.45am.

Gliding through the Blue Mountains’ beauty

I nap through the trip’s teething stages. I see Sydney’s outskirts all the time but today is not that day. I wake as buttery light brightens the tree-tips on Lapstone Hill. It’s still early but the view of the Blue Mountains would keep the weariest eyes wide.

I’ve caught trains all over the world yet few rides rival this part of the trip for scenic beauty. Yes, the Austrian Alps were stunning but I felt like I was gliding through a postcard. There’s scruffiness to the bush here – gums hirsute with bushfire regrowth; the fluffy yellow fireworks of wattle – that make it seem more alive.

Just three hours in, an economy fare feels a steal for $117. The seats are padded, the windows have curtains and the train’s vibrating chug smothers noise from other passengers.

TIP: The train also stops at Strathfield and Parramatta if Central if you live in Sydney’s west (check timetables to confirm).

“This is number ten!” a kid yells as we pass through the tunnels outside Lithgow, reminding the grown-ups in earshot that tunnels are pretty exciting. The cliffs are high and it is dank and fern-filled here at their base. Incredible to think that blasting 10 tunnels was the easiest way to exit on the western side of the Great Dividing Range.

With the benefit of spring-time morning light, even Lithgow, a city not known for its beauty, offers scenic slices: pigeons wheeling to settle on weatherboard eves, blossoms in early pink bloom, tall straight pines and smoke rising from cottage chimneys.

A woman sits nearby with her hands clasped in her lap. She’s returning home to Ivanhoe, 800 kilometres from Sydney, but like many who catch this train a lot, she doesn’t read or do crosswords. She looks out the window and looks at me, pulling distractions from my bag like rabbits from a hat, crammed in the night before, fearful I’d get bored.

But no thanks to my distractions, I don’t. Hours go by just staring out the window, especially after the train parts ways with the highway and the “real country” begins, rabbits leaping along fences.

TIP: Call [add number] to book your ticket and ask for a ‘full’ window. First-class window seats ($142 with extra seat recline) sell out first, so get in early.

The blur of the outback

After Bathurst, the Australia “riding on the sheep’s back” begins, their fat furry bums fleeing through rocky paddocks, past cow skulls bleaching in the sun like they’ve been dead an eternity. But it’s not places like Bathurst, named after European VIPs (in this case, the Secretary of State for War and the Colonies,The Earl Bathurst) that are the most interesting stops.

It’s the unfamiliar aboriginal words marking small towns I don’t know, like Wallerawang and Condobolin, the Wiradjuri words for “plenty of water” and “shallow crossing”, and Euabalong West, population 70, a station so small I miss it entirely, just see a few disembarked passengers walking into the distance as we pull away.

The trip’s most stunning stretch is not due to nature but to a crop – canola – the bright glare of its yellow fields splitting the tourists (who lunge for their cameras) from the locals (who do not).

The sky is growing bigger, as measured by clouds lolling back as far as I can see. Quite suddenly, though I’ve been waiting attentively for it to “happen”, the outback is here. The soil is red and scrubby and the trees are gnarled survivors. The view becomes monochromatic and most passengers turn inwards to their entertainment devices.

They miss goats plunging in a panic headfirst through barbed wire fences. They miss emu on the horizon and kangaroos, ears twitching but otherwise still. Dinner is served. It is the lunch menu all over again. Time slips by.
After Ivanhoe, the sun drops low. A long, straight fence stretches alongside the tracks, glimmering like taut fishing wire. On one side of the train, a full, bright moon rises; on the other Menindee Lakes reflects the fading light. Deep navy light passes over both sides of the train and then, blackness.

At 7.30pm, the train slows at its final stop: Broken Hill. After so long in the train, I feel unsteady on the platform. The activity – locals shouting greetings to returning family, guards whistling and baggage being hauled out – is a bit overwhelming.

The “baggage guy” is firm with the gathering swarm of passengers. Stand behind a rope, enter at one end, identify your bag, and exit at the other end. One passenger deviates and is sent to the back of the line. I do as I’m told and wheel my bag out into the September night air.

Something is different. It’s not just cool, it’s windy. I’ve only been here in the still swelter of summer so while I can see I’m on the Silver City Highway, a street I know well, I feel I’ve been transplanted to a different Broken Hill.

Did the train live up to my expectations? Absolutely. If you can set a back-up alarm, have a day free, or want to save extra spending money for Broken Hill souvenirs it’s a wonderful way to spend the day and … understand just how far you are from the coast!

TIP: The XPT goes direct to Broken Hill on Mondays only. Pensioners can travel for just $28). Check all details on the NSW TrainLinks website first.