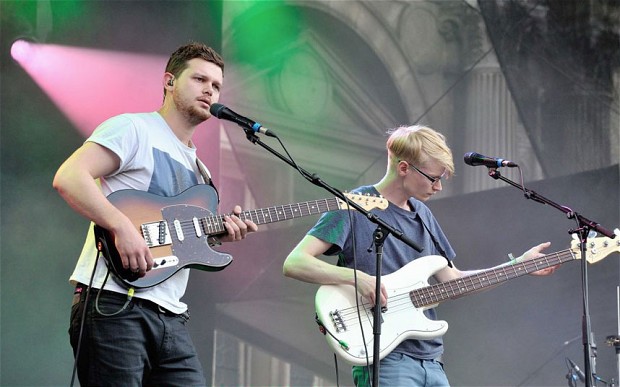 When pundits describe English band alt – J as ‘indie rock’, my eyebrows raise. I scoff, too, at ‘psychedelic folk’ or ‘experimental’ though guitarist and bassist Gwil Sainsbury’s tags of ‘nomadic’ and ‘rhizomatic’ get pretty close. Truth is, for a band so popular – three tracks from their Mercury Prize-winning debut An Awesome Wave ranked in Triple J’s Hottest 100 last year – alt – J are refreshingly hard to categorise.

The cavernous cube of the Hordern Pavilion can care little for such subtleties but tonight’s sold-out show is a fortunate exception. The four-piece emerge throwing triangle gang signs to the bangin’ gangsta rap of Tyga’s ‘Rack City’ in what at first seems like an ironic, art-school-graduate nod to a sensibility far from theirs but turns out to be a harbinger of the show.

Not that alt – J play hip hop or sing about niggers and bitches (like Tyga). But their beats are as heavy as any gangsta rapper’s and the buzzing basslines – played mainly on a synth so it’s punishingly unfluctuating –  see a sea of heads nod, and arms lever up and down, much like at a hip-hop show.

From the opener, ‘Intro’, it’s apparent Joe Newman’s nasal oscillations have a surprising soulfulness live, substantiating lyrics that come across much more playfully on record. Guitar strapped armpit high – in defiance of rock ‘n’ roll’s low-slung phallicism – Newman stands close to the microphone, quite still, leaving keyboardist Gus Unger-Hamilton to do the talking.

Not that there’s much of it. A clipped British “cheers” after songs and “How you doing Sydney, alright?” is about it. Merciful, really, when the music is this good.

Not a song falls short and not just because the sound is blissfully crisp. It’s because even Alt-J’s dancefloor thumpers like ‘Fitzpleasure’ (“Deep greedy and Googling every corner”) are dappled by moments of beauty, compelling you to close your eyes even as you succumb to the big dumb fun of its power chords. It’s because during ‘Breezeblocks’ (their biggest but also their weakest song) Thom Green renounces his whip-crack-sharp snare for a passage of double-kick drum – a palatable snippet of metal’s fury – and because a cover of Kylie Minogue’s ‘Slow’ mashed with Dr Dre moves from sleazy and greasy to twanging country.

Often, when a show moves from highlight to highlight, you’re left feeling like you ate too much rich food, too fast. With Alt-J, the pleasures are constant, but unrepeated in nuance. Like when Unger-Hamilton and Newman harmonise a capella on ‘MS’ – “Dark seeks dark, darker darker” – causing a pin-drop silence among the 5000 here, a hush into which, afterwards, the song’s sweet little swoops of guitar, can descend.

Leaving, I realise I’m not sure Alt-J didn’t just play their excellent songs to an appreciative crowd in the right room with great sound. This could well be the case. But with this band, and those songs, it was enough. what is prozac