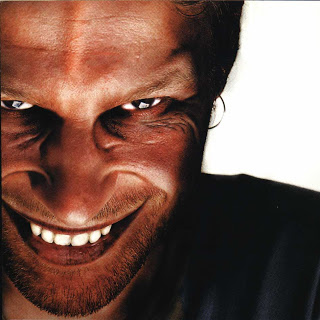 There’s no music while we wait for Aphex Twin. Just roadies roaming the first few rows bearing video cameras with searchlights, gathering footage of faces in the crowd. Purposeful and silent. Some people try to duck the interrogative shaft of light but most stare back, enjoying the confrontation. They’re fans of Aphex Twin, after all. Confrontation is the point. We’re all strapped in here.

’90s anachronisms are peppered throughout the audience – re-incarnated habits and styles that had passed on with little commemoration. Like the scowling guy wearing black bug-eye sunglasses. Like the couple awkwardly ‘cuddle-dancing’ to opening DJ Mark Pritchard. Like the oblivious people waving glow sticks. Like the ferals in fluffy pants.

Presumably the people here aren’t interested in Future Music Festival – the reason Aphex Twin is in Australia for the first time in eight years. Maybe, like me, their entry point to Aphex Twin wasn’t dance music. I came via industrial music; was mesmerised by the pace of his abrasive, punishing sounds and its relentlessness. Later, it was the ambient works that roped me in. I’ve never been in it to dance. That’s why I’m taken aback when he kicks off mixing hip-hop. There’s the bass line from Digital Underground’s ‘The Humpty Dance’, bells from Run DMC’s ‘Peter Piper’, drums from Public Enemy’s ‘Security of the First World’ and sax from Wreckx-N-Effect’s ‘Rump Shaker’. It’s deafening and has macabre trace elements of Richard D. James somewhere in the mix. But it’s not what I’m here for.

The LED panels fire up – a huge, split-level wall of light with ferocious capacity – and begin to strobe the black and white Aphex Twin logo. The visual stimulus of it ripples across the crowd – brand power at its most visceral.

What other logo sparks recognition within spitting distance of the musical mainstream yet is so synonymous with raw confrontation?

The set moves to electro, mixing in scratching samples and even some James Brown. I’m hoping this is the calm before the storm because I’m here for the unadulterated Aphex Twin experience. The one that’s seen me slumped on the far reaches of dance floors with my head in my hands. The sonic stamina test. When lasers start slicing through the air to an ecstatic cheer from the audience and he mixes in the first distinctly Aphex Twin sound – like a car horn that’s been put through a blender – I think: ‘It’s begun’.

I’m upstairs in the seated section but, like me, people are standing in the sloped aisles, bodies illuminated by the powerful lights. The visuals are showing the faces from the crowd– at times recognisable, at times a swirling, mutated mess. It’s an obvious inversion of the dancing-crowd visuals that are so popular with people who dance to be seen. But the critique only works when their faces are all messed up. Because when they’re not – and when they recognise themselves and dance harder – I’m plunged back into the crucible of hell I suffered in Poland last year: an electronic music festival sponsored by an energy drink where I watched in despair as kids saw themselves dancing on the screens, filmed it, then replayed the footage on the dancefloor; in the process spiralling so deep into a void of narcissism I willed them never to return.

Everything is escalating. The pace, the lights, the harshness of the sound. Richard D. James’ maniacal face is devouring the faces on the screen and the sound is compacting into the aural equivalent of a pumice-stone scrub. Then it begins. Bob Hawke, Kath & Kim, Steve Irwin, Molly Meldrum, Ossie Ostrich, Kylie and Jason, Guy Sebastian, Julia Gillard and The Wiggles all flash up on the screen bearing Aphex Twin’s face – even more distorted than usual, stitched together and pig-like with red devil eyes. The crowd gasp in delight with each new identity. Now it’s Gough Whitlam in his ‘It’s Time’ t-shirt, a picture that means a lot to me. But I hand him right on over and laugh as his face is defiled. Why? Visually, it’s a clumsy cut and paste. Conceptually, it’s infantile. So why is it so electrifying? Is the sound and searing light crippling our cognitive faculties? Pummeling us into a state of submission? “Yes!” we cry. “Take our icons! Violate our celebrities! Steal their faces! Fuck them up!”

The last 10 minutes is quite simply an onslaught; a full-body audio exfoliant; a sonic sandblasting. This. This is why I come. It’s cleansing to be so consumed; to have no space for ambivalence, distraction or doubt. It’s like extreme exercise or (good) sex.

Just like that, it’s over, and we’re stranded in a throbbing aftershock of silence. First a rumble, then a great wall of cheering rises. Foot-stamping. Slow claps. Pogoing. Whistling. Escalating roars when people think he’s returning to the stage. People in the upper section — who are usually half-asleep by the end of Enmore shows — lean over and start drumming on the overhang. Still, nothing. But none of the traditional signals that it’s genuinely over either. I’ve never seen or heard anything like it in Sydney but, then again, usually the PA starts blaring The Strokes and people shrug and file out. More stamping and cheering. Beer cans torpedoing stage-wards as the crowd capitulates to its collective desire to suffer again at the hands of this masochistic maestro.

Maybe we’re getting weary of the fiction of how tough we’re doing it in Australia. Maybe we want to feel something that actually hurts.