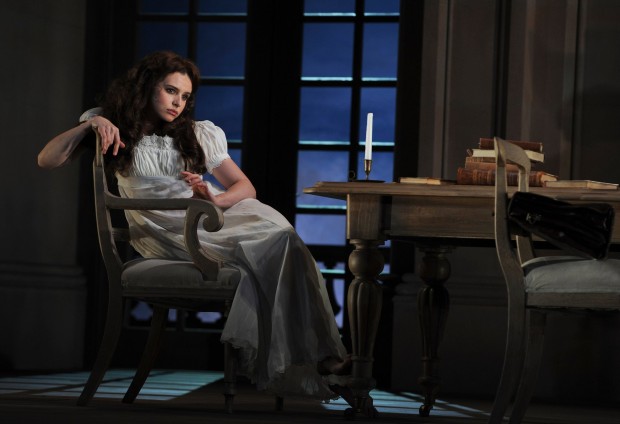 First published in the The Guardian, February 2016

A quick flick through the program is usually enough to mainline a show’s ideas. Tom Stoppard’s Arcadia, however, is the play of ideas of plays of ideas.

Audiences would be better primed prepping on the basics of chaos theory, the romantic versus the classic temperament, the second law of thermodynamics, and the peregrinations of notorious shagger and poet Lord Byron. In his dazzling 1993 play, Stoppard tells two stories in parallel, both set in the same English country estate, Sidley Park, but 200 years apart.

Thus begins a story of infidelity and duels, loaded letters, wounded egos and the interfering hand of Lord Byron (who never appears). Interspersed is commentary from Thomasina’s mother, Lady Croom (Blazey Best), on the progress of her garden overhaul from “green and gentle slopes … nature as God intended” to the in-vogue Gothic style she describes as “an eruption of gloomy forest and towering crag”.

Meanwhile, the modern-day story centres on the work of three academics: a novelist, Hannah (Andrea Demetriades); a poetry professor, Bernard (Josh McConville); and a biologist and mathematician, Valentine (Michael Sheasby). All are highly vested, professionally, in untangling the truth of what transpired between the 19th century characters at Sidley Park.

This is Stoppard’s genius. His dialogue is abstract and his action is light on but the Cluedo-esque modern plot invests the audience absolutely in the 19th century plot, which would otherwise seem like a period drama parody, written far beneath Stoppard’s talents.

By placing academics as his key characters, Stoppard has written himself a leave pass to indulge in as much cerebral wankery and wonkery as he pleases. As Bernard (the arts enthusiast) says to Valentine (the science enthusiast):

“A great poet is always timely. A great philosopher is an urgent need. There’s no rush for Isaac Newtown. We were quite happy with Aristotle’s cosmos. Personally, I preferred it. Fifty-five crystal spheres geared to God’s crankshaft is my idea of a satisfying universe … Quarks, quasars – big bangs, black holes. Who gives a shit?”

Arcadia is a dazzling play. So why during the interval at the Sydney Opera House is the queue for coffee so much longer than the queue for champagne? People seem drained. At interval, and again at close, it ends so unceremoniously that the audience begin to clap only when the actors gather to bow.

We laugh but it does not erupt from us. It is laughter on cue. Stoppard’s wickedly funny script leaves no other option. Never does this Sydney Theatre Company (STC) production quite elevate this already brilliant play into something that makes me gasp with its wit and incisiveness.

Stoppard made Arcadia’s only achilles heel – its staggering, bombastic pretentiousness – its key virtue, and a production should chip in the same. Yet directed by Richard Cottrell (who worked with STC last year on George Bernard Shaw’s Arms and the Man), Arcadia has a flatness, a quietness, an inexorability and a lack of climactic peaks. From the back of the large drama theatre it must have been even more pronounced.

The size of the theatre could be part of the problem. The actors regularly speak from the rear of the stage. They seem a long way away. The exception is McConville, as Bernard, whose character is regularly gripped by high excitement, high pomposity or high distress, so his clamour cuts through.

Another exception is Best as Lady Croom. In she sweeps, all cleavage and rustling gowns, and out she sweeps; one-dimensional but laugh-out-loud funny. “Pray, what is this rustic hovel that presumes to superpose itself on my gazebo?” It is true that Stoppard gifted Lady Croom some of the most deliciously vicious lines a lady in finery has spoken since Oscar Wilde birthed Lady Bracknell, but Best wrings out every drop, her trilling diction and long vowels like currawong song.

In Stoppard’s script the tutor Septimus has far more scope to be an utter jerk than he does to be the wry, reluctant rake he is played by Corr. In his scenes with Thomasina, when her cleverness is such that he can’t dismiss her as a flibbertigibbet (even though she says things like “Oh goody!”), Corr is brilliantly broody. So far, so good.

Was this uneven directing by Cottrell, or was it Stoppard writing Septimus as a real person and Chater and Lady Croom as buffoon and archetype respectively? Who knows? Stoppard is certainly very present in the stage directions, down to details such as this for Thomasina: “Her interest has switched in the mercurial way characteristic of her.”

Because it is Stoppard, because it is Arcadia, and because the acting is still very good, this play remains a wonderful experience, especially if you haven’t seen it before. For university students still in rapture to the incandescence of ideas, tossed about by brilliant brains, even better.