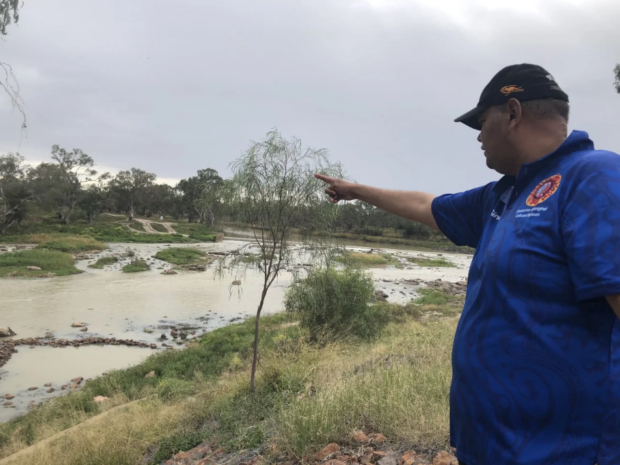 The swiftest way to interest people in Baiame’s Ngunnhu (the Brewarrina Aboriginal fish traps) is to state, as many have, that the stone traps are the oldest surviving human-made construction in the world. It’s some elevator pitch. But superlatives such as ‘oldest’ “don’t come from us,” says Ngemba man Bradley Hardy. 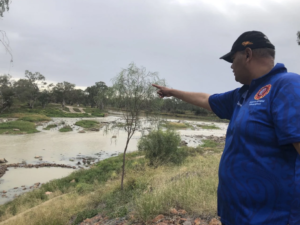 Hardy, also of Ualarai, Kamilaroi and Koamu descent, is a tour guide at Brewarrina Aboriginal cultural museum. The museum is a few paces from the Barwon River in this small northwest NSW town known fondly as ‘Bree’. As the crow flies, which lots do around here, cawing and creaking across the big sky, Brewarrina is roughly halfway between the outback towns of Lightning Ridge and Bourke. Seeing the traps – still here, feeding people and pelicans – is quietly life changing. You marvel you’ve not done it before. You want to tell every grey nomad you see – and you see a lot out here, in motorhomes with names like King of the Road (Drifter Series).

Coming to Brewarrina from the east, through Narrabri, you pass through a dense farming belt where the roads re-etch the boundaries of cotton, wheat and chickpea crops. Due west from Wee Waa, escapee cotton piles up in fluffy roadside drifts. We’ve left our drive too late in the day and the setting sun illuminates every insect, limb and wing, splattered on our windscreen. A right-angle turn down yet another ruler-straight road solves the glare problem. That night we camp at Brewarrina’s Four Mile Reserve on a blissful bend in the Barwon River. We wake to the turquoise flash of budgerigars and a river like green milk, dimpled by gumnuts.

Regardless of whether the traps were built 40,000, 19,000 or as ‘recently’ as 3,000 years ago (all are floated in Bruce Pascoe’s book Dark Emu) this marvel of engineering is a site of astonishing antiquity and older by many millennia than the ruins Australians travel to see abroad. In Dark Emu, Pascoe settles on a respectful way to date them, writing that Ngunnhu “is so old that … the Ngemba attribute its construction to the creator spirit, Baiame.”

The traditional owners’ reluctance to promote ‘the oldest’ label too loudly makes sense. It would imply a higher-ranked significance but to who? And to what end? Rio Tinto knew of Juukan Gorge’s cultural significance to the Puutu Kunti Kuurama and Pinikura peoples before its detonation in May. And people in Brewarrina knew the traps were ancient in the 1960s and seventies when parts were destroyed to make way for a weir.  “You have to remember, when they started that work we were still classed as flora and fauna,” says Hardy of the 1967 referendum, which voted to count Aboriginal people in the population. “They couldn’t care what we were or how ancient it was. It could have been six trillion years old.”

Despite the odds, the traps survived. A woman on the tour asks how, why. She is incredulous. “They’re well built, easy answer that one,” Hardy says. “The levees wash away but the fish traps are still there.” His ancestors’ stone-locking system kept them anchored against the floods that raged down this river back when megafauna such as the ancient wombat, diprotodon, may’ve still been thundering around the bush. The traps were built by eight different tribes and language groups: the Koamu, Morowari, Ualarai, Kamilaroi, Baranbinja, Weliwan, Kula and Ngemba. Along with other food, the fish caught here were plentiful enough to feed the hundreds or possibly thousands who gathered for ceremonies.

“Only 30% to 40% of the fish are trapped and stored,” says Hardy. “The other 70% swim upstream to spawn. We are fish farmers but we looked after the waterways, so we’re river environmentalists too.” Early in 2020, the Barwon was so low the traps lay exposed; their dry stones as bony as a fish stripped of flesh. Big rains came in February and Hardy was happy to see the flow. “In that channel there, you put your hands down like this,” – he demonstrates – “and you flick the silver perch out because the golden perch swim directly underneath.” His cousin caught a Murray Cod with his bare hands a few weeks ago. “Bang, the fish went clean into him!”

Still, the demands of irrigated farming have changed the waterways of the Murray-Darling basin. So has the European carp, introduced to control weeds. One of those, ropeweed, was a natural water filter and a “hangout spot” for crayfish, brim, turtles and mussels, says Hardy. “Carp eat all the plant life so it destroyed that filter system and those spots for smaller species.”

For the first 20 years of his life – he’s 41 now – he says the river took “forever” to drop after a flood. “When the water drops slowly, the sun’s hitting the banks and they’re getting their strength back. What happens now is the cotton sucks our water straight out too quickly and the banks fall into the river, trees and all.” In Ngemba language, ‘bre’ means tall and ‘warrina’ means trees. Tall trees. Losing them, even the half-dead ones with bird nests in their knotty boughs, must hurt too.

As awareness of the Uluru Statement From The Heart increases in Australia, the understanding that we need historical truth telling is growing too. But the truths don’t just land in our laps. We need the people to tell them – and Hardy has the born knack. In 2017, when (then Treasurer) Scott Morrison visited the traps he paused on one of the certificates of exemption that hangs in the museum. The Australian Government gave the certificates to Aboriginal people during World War 2 so they could come into town to look for work.

To his credit, Morrison was curious. “He asked me to explain it more, which I found a bit freaky,” Hardy says. “That’d be like me saying ‘Scott, can you explain my fish traps to me? Can you explain my waterways to me?’ That [certificate] was set up by government. They should know the history of the things they did. You’d be surprised how many government people I get on tour – whether liberal, Labor or Greens – who don’t know the history of that certificate.”

He’d like more politicians to come though. “Remember, this is known as a place of peace for tribes. It has always been a meeting place and a place to share and to learn.”