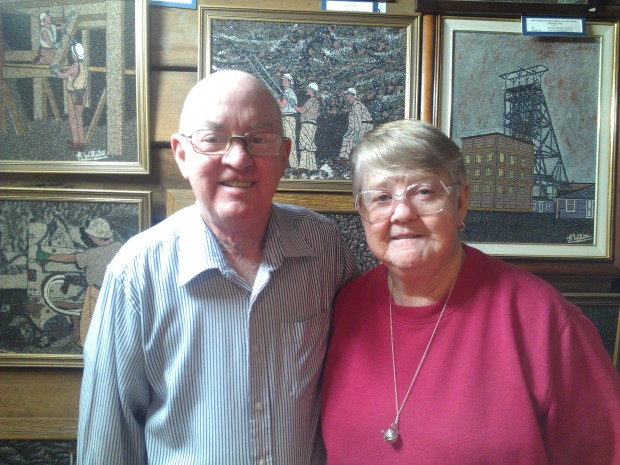 Art, Dolls and a Teddybear’s Picnic (4/10 in a story series from Broken Hill) 
One afternoon in 1971, Kevin “Bushy” White, then a miner with Zinc Corporation, came home and said a curious thing. “It’s dark down there, Betty, but it’s beautiful,” he told his wife.

The multi-coloured minerals in the rock Bushy spent his days blasting through were twinkling back at him. “Betty got me a hobby kit with imitation rocks and I said ‘Get rid of the rocks, I’ll use the real thing’.”

Forty-three years on, it is clear Bushy’s hobby became an obsession. Frame after frame of his art – made from rock carried out during his 26 years underground, crushed and glued – carpet the walls and creep up to the ceiling.

“No imitation rocks, no dyes,” Bushy says, turning to scrape his fingernails crunchily down a canvass. “And you can’t damage it!”

Man with a mission

Unmissably sandwiched among suburban houses, White’s Mineral Art and Living Mining Museum is a curious sight when you pull up. Several signs blare from its façade, one a massive grinning miner, his drill piercing the blue outback sky, a jumble of vintage mining equipment beneath. You’d almost think the theme was mining … until noting another sign that says “Large handmade doll and bear display. Unique a must see.”

Bushy and his mates built the museum in 1984 in the Whites’ front yard. His dream was to allow tourists to “go underground without going underground” and at 71-years old, that’s what he’s still doing.

After ushering tourists into an area built with the same timber ‘stopes’ he worked among as a young miner, Bushy flicks off the light and holds a candle up, assuring visitors it’s the perfect way to see the minerals glimmering from his art.

Later, he uses a scale model of a mine to show us the back-breaking work that mining was before modern technology, dispelling any vagaries on how Broken Hill’s legendary silver-lead-zinc ore body was actually blasted, gathered and hauled back out.

Everything changed when “computers came in” Bushy says. The “Hollywood miners” today “sit on their backsides pulling handles. Stress and boredom is the killer now.”

Bushy’s wife Betty waits near the exit, ready to show tourists her dolls. Also born and bred in Broken Hill, Betty understands the perils of a hobby gone large. Her doll collection numbers 1,000, most made and dressed by her, and a multifarious gathering of bears cluster in the room’s far corner: ‘The Teddybears Picnic’.

Like Bushy, who is currently working on ten artworks, Betty has found her niche and shows no sign of stopping. “I haven’t even counted the bears yet. They seem to multiply overnight.”

She began making clothes for dolls when her children no longer wanted to wear her homemade creations. “Dolls don’t answer back,” she says, inarguably.

History Is Not For Sale

While the Whites have a quaint store selling minerals, pet rocks and other local trinkets, money cannot buy Betty’s dolls or much of Bushy’s art.

Point to certain frames depicting scenes of men working underground or Broken Hill heritage buildings and Bushy jumps in. “That one’s history. It’s not for sale.”

Bushy has his rules and Betty has hers. In a book the Whites made about the museum, Betty advises: “When all else fails, hug your dolly!”