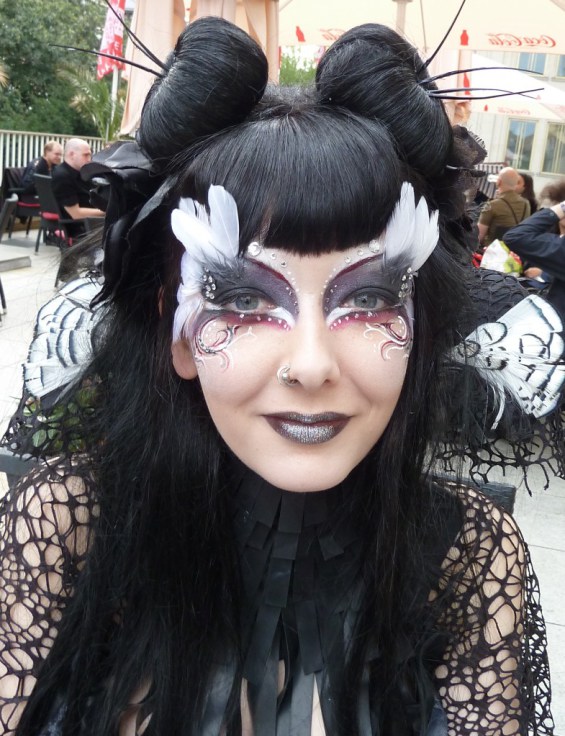 He stalks by the tram stop in head-to-toe black PVC, thighs squeaking like rodents. Light glints from studs around his neck long enough to skewer a steak and his face scowls from behind a fragile scaffolding of chains and piercings. We’ve arrived.

Each year in May or June, the German city of Leipzig hosts the biggest Gothic and dark culture event in the world – the four-day Wave-Gotik-Treffen (WGT). More than 20,000 of the Gothic diaspora heed the call to come and swamp Leipzig in black. For Goths, being the majority in public is a rare event to be celebrated. Banned by the East German communist government in the eighties, WGT relocated from Potsdam to Leipzig after the fall of the Berlin Wall.

But planning to attend a Gothic festival is tricky when you’ve been travelling for six months already – three of those in Africa. Our clothes are tattered and we left the leathers, fishnets and capes back home. An unofficial WGT website, SadGoth.com, comforts festival neophytes like us, writing: “You will encounter a sea of black-dressed people the moment you arrive, making you feel at home and safe.”

SadGoth was right. When we emerge from Leipzig train station a day before WGT, Goths are everywhere. There’s pale people dragging coffins, men in top hats and gas masks, couples strolling by in full Romantic era regalia and cyberpunk goths in welding goggles with hip-length hair extensions made from electrical wiring. There’s rockabilly Goths, transgender Goths, steampunk Goths, rivethead Goths and vampire Goths. Hundreds of them. Dimming the city streets like a colony of bats flying across the sun. I’m wearing my travel trackies, a pink t-shirt and non-slip sandals. We high tail it to the hotel to get gothed up.

Uninformed tourists arriving in Leipzig during WGT will find accommodation scarce. If they find some, though, they’re in for a fabulous people-watching treat, even without a festival pass. WGT is held in around 40 venues across the city meaning there are Goths promenading everywhere. Contrary to their reputation for sinister habits and depressive tendencies, there’s a celebratory, theatrical air in Leipzig. And, oh the fashion! As the premiere event on the global Goth calendar, festival-goers spare no effort. It’s like being at The Melbourne Cup in a universe where everyone likes Nick Cave. But Goths, remember, dress to shock so it’s BYO open mind.

Day One at WGT sees us don every black item in our suitcase and make a shopping list: black nail polish, black eye-liner, black hair dye and white face powder. Our hotel is a crisp, corporate establishment with white walls, upright chairs and about 50 Goths demurely eating breakfast. A woman enters wearing a shroud and a black gauze tutu. She helps herself to boiled eggs at the buffet, taking care not to dip her gauze in the jam.

That afternoon we see Greek-American ‘horror opera’ diva Diamanda Galas at The Opera House. We miss the costume memo. Not one of the many Goths posturing on The Opera House steps is in modern-day attire. I admire a Victorian era widow-in-mourning with delicate bird wings for eyelashes. She’s accompanied by a fellow with an Amadeus Mozart ‘up do’ wearing a hunting suit. “Spooky and cool,” my husband keeps murmuring as he watches yet another incredible frock go by. “It’s people-watching people who want to be watched!”

We ask a German Goth what bands he’s at WGT to see. “All and none,” he replies. “For me it’s more important to come here and just be. It’s a magic time for us. For four days this city is ours. It’s like being on another planet.”

Leipzig is a pleasant, plain and well-serviced city – a surprising host for a movement that worships all things dark. Just an hour south of Berlin, Leipzig shares little of the gritty urban chic of its northern counterpart but as a major conference city, it has ample hotel accommodation with about 12,000 rooms in the city centre alone. Come WGT, however, there’s barely a suit in sight when the hotels are dominated by Goths.

These days WGT encompasses up to 200 musical acts, Renaissance fairs, Viking markets, a full-scale Medieval Village, film premieres, literary readings, artist signings and a campground. Its popularity has put Leipzig in the unusual position of having a Gothic festival as one of its biggest civic events. The city embraces the festival, stating bluntly on its online events calendar ‘Leipzig goes black’. It runs a free ‘black’ tramline to festival venues and hands organisers the keys to venerable cultural institutions like churches, museums, The Opera House and – naturally – the cemetery.

“Let’s go to the Vampire masquerade!” we decide on Day Two. The venue is miles away but we’re hoping for an impressive show. Instead we find a damp, decrepit house on the outskirts of town with 30 or so Goths in the back yard beginning a vampire role-play game. Slightly alarmed, and spectacularly out of place, we decline their offer to play and stand awkwardly next to a tree, watching. The players wear fangs that look creepily real but it’s not a spectator sport so we slip away and head to lush Parkbühne, where Goths mushroom out of the greenery like some sort of spreading black fungus.

“What time does the cemetery open?” It’s not my usual question on arising but Day Three is open day at Leipzig’s cemeteries and churches and we anticipate quite a spectacle. The day is sunny but that hasn’t dampened the dark spirits of the Goths gathering at Sudfriedhof cemetery. Hundreds are here, draped picturesquely over gravestones or milling morbidly around the chapel.

Stunning women with spectacular cleavages, hooped gowns, corsets and parasols meander down leafy paths while a dead-looking Goth drags his friend around on a chain. Everyone is friendly; everyone is having a blast. Leipzig Cathedral is next, where an earnest Christian Goth theatre troupe performs a musical about humankind’s fall from grace.

While the city of Leipzig capitulated to Gothic purchase power long ago, some hotels remain aggrieved by the Gothic influx. But SadGoth.com maintains that’s no reason to raise an eyebrow. His website aims to punish prudish Leipzig Hotels with a ‘Goth star’ rating system. To determine the rating, Goths answer questions like “How did hotel staff treat you when you appeared ‘all Gothed up’?” and “Did staff let you sleep or did they pester to clean your room?” A rating of one measly Goth star means the hotel “Treated you like an alien and told you not to come back next year.” A two-Goth-star rated hotel “Treated you unequally, gave you dirty looks and made you feel ostracised.” Meanwhile, a five-Goth-star hotel “Treated you with utmost respect, even with your best Goth gear on”.

Day Four and it’s time to visit The Agra: home to the campground, the rock stadiums, the Medieval Village and the Gothic marketplace – the black, beating heart of WGT.  We wander the marketplace until the PVC and rubber fumes make us dizzy, then wile away hours in the Medieval Village where fathers push prams wearing t-shirts saying: ‘I’m Dead’. Stalls sell modern essentials like swords, chain mail, axes, bows and arrows, perfume vials, potions and suspect medieval meats spinning on spits. We drink elderberry wine and dance to Pagan Folk (think brawny men in animal skins playing lutes, flutes and fiddles). By anyone’s definition, the Medieval Village is a big old barrel of fun. Even SadGoth agrees. “If you fail to enjoy yourself here, you may as well give up and crawl into your coffin.”

Back in Leipzig central, Goths are running the gauntlet of happy snappers. Tourists have given up being spooked and the city has transformed into a sprawling photo shoot. They tap Goths on the shoulder and point eagerly to their camera. “Ja,” most subjects reply, breezily, before striking a killer pose. We watch bands, drink cheap steins and eat bockwurst. We walk the length of Leipzig mall and giggle at medieval damsels eating pizza. We marvel at Goths downing fiery absinthe shots with mechanical equanimity and invent a guessing game of which ones can ‘de-goth’ for a conservative day job. We people-watch WGT to a close, realising this is a festival where the attendees are the matchless star attraction.