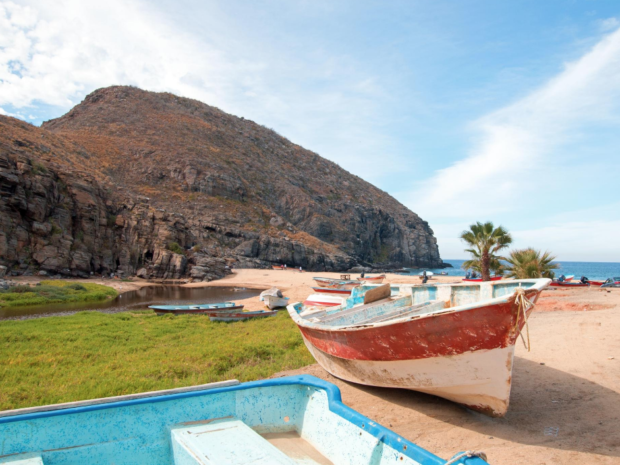 First published in the Australian, January 2020

Los Cabos, on the southern tip of Mexico’s Baja California Peninsula, is a resort region of long beaches, desert dunes and rocky ranges. Despite its apparent dryness, it’s home to more organic farms than any other Mexican state, feeding a thriving farm-to-table restaurant scene.Driving into Flora Farms is like entering the Garden of Eden. A very industrious Eden. Wheelbarrows laden with leafy greens circle as farmhands, bakers, beer-pullers, tree-trimmers and yoga instructors go this way and that. Guests come to Flora’s lush ten-acre property for the spa nestled among the papaya trees, or to do classes in painting and cooking. A guided walk reveals an entire pharmacy of medicinal desert plants. Most people come for lunch or dinner though. The breezy farm bar serves farmaritas (an heirloom carrot twist on a margarita) while the meat served in the restaurant is hormone and antibiotic-free, raised in the farm’s nearby ranch. Beef is off the menu; the Baja peninsula is too dry. Flora-farms.com 02
Cape Hotel’s architects nailed its mid-century Baja-meets-Southern California aesthetic. Arriving at night to waves crashing ashore the well-known surfers’ break beneath is memorable enough – then there’s the seductively lit sunken bar and Manta’s hand-carved wooden doors. The Mexico City restaurant of molecular gastronomist, Enrique Olvera, is ranked as one of the world’s best and Manta can’t be far behind. A lamp hangs low over our table, casting the room into shadow as waiters school like fish in the depths, appearing only when you need them. The highlight of the Japanese-influenced degustation is an octopus from Campeche with a taste and texture unlike any other Cephalopod. Sip some small-batch tequilas at the bar after. mantarestaurant.com

03
A little of the magic realism of Mexican film Like Water For Chocolate emanates from Los Tamarindos’ 19th century farmhouse – as well as some deliciously smoky smells. An iced lemongrass tea welcomes you to the 17-acre property that once farmed sugar cane atop an underground river. Now it’s an organic farm-to-table restaurant serving chile relleno, grilled octopus and Santa Rosa goat, among other favourites, on a rustic terrace with vines framing the view. We wander the farm harvesting herbs and vegetables, plus some Serrano chillies to spice up our margaritas, before taking an unhurried class in how to prepare salsa and guacamole the traditional way.
Lostamarindos.mx

04
Étnica is in the pueblo mágico (magical town) of Todos Santos and stocks fair trade Mexican-made goods that are stylish and sought after, such as Liberty Black brand cowboy boots. The embroidered cotton clothes and hand tooled leather bags look like they’d last a lifetime and you’ll find more unique items here than in the nearby market. Buying at Étnica means buying ethically too, from cooperatives in mainland Mexico such as Oaxaca and Chiapas, as the store’s owner travels to hand-pick wares and lets artisans set prices. There’s no hard sell or haggling, just a tranquil place to try on clothes and shoes and make a decision free of buyer’s regret.
etnica-todos-santos.com

05
For a taste of Baja Med cuisine by the celebrity chef who created it, Javier Plascencia, head to Jazamango, another of the region’s exceptional farm-to-table restaurants. The restaurant is placed among the fields of the produce heaped on your plate – part of Plascencia’s emphasis on an all-senses dining experience – with sage and rosemary smouldering nearby as an insect repellent. Perhaps it’s the natural charm of the waiters, the dry heat or the white sangria infused with passion fruit from the orchard but only the cactuses stop me from thinking I’m lunching in the French or Spanish countryside. The food fuses Mexican and Mediterranean cuisine, with zingy hints of Asian, and leaves you craving a hammock for a post-lunch nap.
opentable.com.mx/r/jazamango-todos-santos

06
Next door to the Hotel California is Galeria Logan – the home, studio and exhibition space of landscape artist Jill Logan. With mosaics pressed into the walls and Logan’s works in silver, copper and gold leaf glimmering on the patio, it’s a lovely wander. Jill’s story is an archetype but nevertheless true: she visited from California on a painting sabbatical in 1994 and was so smitten by the quality of the light she returned to live for good. “I felt Todos Santos was the next Santa Fe, a budding art town,” she says. The indoor-outdoor gallery has Jill’s colourful expressionist paintings for sale as well as prints and postcards. “Every year more artists are moving here,” she says.
Jilllogan.com

07
Walking through Solaz Resort to its oceanfront bar and restaurant, Mako, you’ll pass an abundance of desert plants endemic to Baja California. Many of the giant cardón cactuses uprooted during the property’s development were returned afterwards, explaining their size. Mako looks over the Sea of Cortez. It’s a non-swimming beach but there’s a swim-up bar on the sophisticated side of the pool party spectrum. Private sunbeds or poolside cabañas for a group or a family are options too. Mako’s seasonal menu ranges from tuna tartare, salad sourced from local biodynamic farms and wood-fired flatbreads. At night, it switches to a grill offering dry aged steak, local lobster and fresh fish. Bookings are recommended for non-guests.

08
If resorts with multiple restaurants begin to feel impersonal, Casa Dahlia in San Jose is the remedy. The gallery’s leafy courtyard seats just 12 people for dinner and an old film screening such as Hitchcock or a silent picture starring Buster Keaton. Casa Dahlia serves Baja recipes with a focus on tamales with mole, green or red sauce, washed down with hibiscus water and followed by a house flan. Some are wrapped in cornhusks, a northern Mexican tradition, and some in banana leaves from the tropical south. The largely female chefs share stories of the dishes too, and where possible ingredients are sourced from Los Cabos’ organic farms. Open Tuesday nights between January and June.

09
Public beaches are rare along this resort-heavy coast but Punta Lobos is an exception and a wonderful way to soak up local life. Fifteen minutes from Todos Santos, down a dusty dirt road, a festive feel awaits, with families galore, ranchera music playing from cars, a sandy little Catholic chapel and pelicans bobbing around the breakers. Fishermen launch their panga boats daily and sell their catch fresh on return, while tacos are whipped up nearby. Even better, the beach adjoins the name-droppable Hotel San Cristobal — yet another Instagrammer’s nirvana — which offers day passes for its pool.
sancristobalbaja.com.

10: Best Bed
Apparently the world’s second-most Instagrammed hotel, Viceroy Los Cabos is more immersive artwork than resort. By day this 128-room luxury property is all clean white lines, painterly passages you wind down to reach the beach and water that makes the whole thing look half-submerged. One of its architectural maxims is “we live a different life at night” and after sunset the common areas become a horizontal house of mirrors. Mezcal fans will enjoy an impressive range in the minibar, along with artisanal snacks and craft beer from Baja Brewers. Meanwhile, an in-room Alexa will research excursions and play songs while you bubble away in the hot tub on the deck. Prices start at USD$400 per night.

Kate Hennessy was a guest of Los Cabos Tourism.