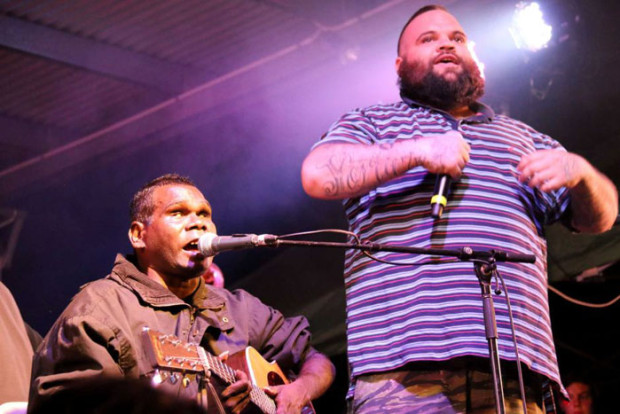 An hour from Katherine, Barunga Festival is the Northern Territory’s largest and longest-running remote community festival. Held on the Queen’s Birthday Weekend – between the seasons of Banggarrang and Malapbarr according to the local Jawoyn people – the community’s population of around 300 swells to more than 3,000 with tents pitched on every spare patch of grass. The festival attracts Indigenous visitors from places several days’ drive away like Yuendumu, Doomadgee in Cape York and Fitzroy Crossing in Western Australia. They come for the sport, music and culture though Barunga’s underlying theme of family connections was more evident than ever this year.

It was epitomised by performers including Geoffrey Gurrumul Yunupingu, Warumpi Band and Blekbela Mujak inviting their relatives on stage. For Blekbela Mujak that offer was accepted by a family numbering about 30 – excited kids, old ladies and young men danced together. Back at Barunga for the first time in 20 years, Paul Kelly told a rapt crowd his trio too was “a family affair” (he was joined by his two nephews).

Tempering Barunga’s spirit of celebration was frustration that many Indigenous Australians are facing the same issues now as 30 years ago when the festival was founded by Barunga school principal and Blekbela Mujak band leader, Peter Arpak Miller. “Australia can’t become the nation we all want it to be with Indigenous people continuing to be left behind,” said Miller at the official opening ceremony.

Barunga is familiar to many because of the 1988 Barunga Statement – a list of rights presented by Aboriginal leaders to then Prime Minister Bob Hawke to which he promised a treaty. It did not transpire and “all those talking politicians” were immortalised in the song ‘Treaty’ by Yothu Yindi in collaboration with Paul Kelly and Midnight Oil. Fittingly, both Kelly and Peter Garrett were on the festival lineup — Garrett as a surprise act who thrilled crowds by popping up to guest.

Labor Federal Member for Lingiari Warren Snowden read the Barunga statement at the opening. “It’s as relevant today as it was then,” he said. “Think about that when you reflect on constitutional recognition for Aboriginal and Torres Straight Islanders.” The issue was pertinent for the President of the Northern Land Council Samuel Bush-Blanasi too. “Sadly in 2015 that treaty still seems a long way away,” he said. “While we continue to wait and talk it’s good to bring people together at Barunga.” While Garrett’s guest verse with Kelly on ‘From Little Things Big Things Grow’ was a moment rich with significance, the weekend’s best-received acts were bush bands like T Lynx, Lonely Boys, Mambali Band or when powerful Victorian rapper Briggs blazed out to perform ‘The Hunt’ with Gurrumul. Most exhilarating of all, however, was R&B eight-piece B2M (Bathurst to Melville) who recently sold out Darwin Entertainment Centre. Beginning with a Michael Jackson cover, B2M’s set prompted kids to dart onstage and demonstrate lightning-fast dance moves. “We’d like to thank Barunga Festival,” said a B2M singer. “We played here four years ago and word started to travel.”

At sundown on Saturday, traditional dance was performed by the Beswick dancers. In an invitation typical of Barunga’s inclusive spirit, the leader called on white visitors to participate. Though he was seeking male dancers, about eight little girls jumped up when he said “We’re doing the butterfly dance – are there any butterflies out there?”

During the day, the Banatjarl Strongbala Wumin Grup offered workshops in weaving, bush medicine and damper making. “It’s an opportunity for us to share knowledge of the medicine and that makes us proud,” said Miliwanga Sandy. “It’s not just us sitting here – our foremothers are sitting with us too.” Men, meanwhile, taught visitors how to make didgeridoos or roast whole kangaroos.

There’s no other festival like this,” said Skinnyfish Music creative director and Gurrumul’s bass player Michael Hohnen. “It felt really established this year – like something people can rely on. If I were an indigenous person in the top end I’d see obvious business opportunities here.”

A participatory spirit is what makes Barunga so enjoyable and no event captured that better than the hilarity of the spear-throwing competition, MC-ed by Briggs with Skinnyfish Music managing director Mark Grose playing spear ‘ball boy’.

“It’s not just about coming here to watch music,” said Grose of the festival. “It’s about tapping into an economic audience. It’s one of the few places you can come and access community arts centres. You could drive for four days but it might be closed the day you get there.” One such centre at Barunga was Karungkarni Arts Centre operated by Gurindji artists of the Kalkarindji and Daguragu Communities. Centre manager Penny Smith had run out of tubes to roll canvasses in by Sunday. “We’re one of the northernmost places to do dot paintings,” she said as we admired stunning works by Biddy Wavehill and Ena Oscar. The talk of this year’s festival was its future too: a community tour lead by a group of shy yet dedicated school students called the Jawoyn Junior Guides. The tour took in notable community sights before heading into the bush where the kids showed us a Jawoyn “special place” where elders once sharpened spears. As the walk progressed their confidence bloomed. On spotting a native plum tree used as a buffalo scratching post a girl who had until then been reading softy from a script, said “Follow me!”

“I’m so glad we did this,” I overheard a woman say as the tour ended – a good summary of how most visitors felt about coming to Barunga Festival.