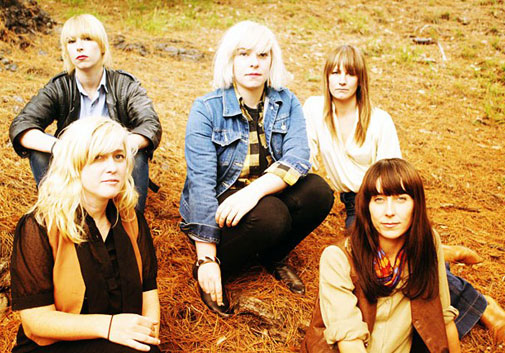 The low-ceilinged den of Goodgod Small Club hosts so many Melbourne bands I’ve begun to associate its womb-like atmosphere with all the effortless cool of our southern sisters and brothers.

Sound-wise, though, Goodgod can be flaky – a hard-to-dismiss detraction if also stuck behind one of the room’s many pillars. The risk you’ll spend the night free-ranging for the sweet spot is countered by what are usually very cheap tickets. Ten dollars (and 70 cents) to see Beaches launch their excellent second album She Beats? Where do I sign?

Within the first few bars of ‘Out of Mind’ that value for money becomes indisputable. Beaches’ sound can’t be simple to recreate – there are three guitars, plus bass, and all five women sing – yet it’s mixed wonderfully.

Relief washes over me as waves of guitar do the same; a marbled blend of wammy, wah and distortion, bleeding blissful melody through every fissure. Beaches lightly touch down on the runways of psych rock and krautrock (as evidenced by Neu!’s Michael Rother contributing guitar on two She Beats tracks) but their ultimate destination is shoegaze in that their noise is so textured, dense and inviting it feels like a quantity you could bathe in.

So excellent is the sound that when Alison Bolger’s vocals on ‘Send Them Away’ are largely MIA, the song’s optimism (“Take those blues and send them away / Don’t look back at the end of the day”) is carried, instead, by the sheen and jangle of guitars, and in the sweetly-angled sunrays of backing vocals.

Beaches’ show is minimal to non-existent, though not with shoegaze’s self-conscious apathy, but in a plain-mannered way that communicates quiet confidence in their chemistry as a band as well as their individual charismas.

Visually, the show’s pleasures are not in big gestures but in small moments, like when lead guitarist and singer Antonia Sellbach’s wammy bar lands at the feet of bass player, Gill Tucker, who smiles, and kicks it gently back, neither missing a beat, Tucker’s casual smoulder contrasting with Sellbach’s wide-eyed horizon gaze.

Sonically, it’s when Sellbach’s far-away vocals on the discordant clash of noise-jam, ‘Weather’, become almost imperceptibly urgent, rare amidst a show that, for all the noise, could be equally enjoyed with eyes closed in Shavasana pose. It’s in being so close to the stage in this intimate club that when guitarist Ali McCann requests more vocals in her foldback speakers, we hear the benefits too.

Possibly the only disappointment is the wisest one a band can provoke: the show ends too soon, leaving everyone, even those emerging from behind pillars, yearning for more.