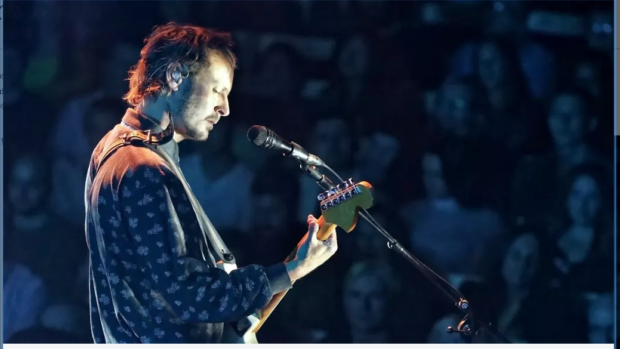 In 2011 and 2014, when UK singer-songwriter Ben Howard’s first two albums came out, hunger still rumbled for the guitar-lead musings of sensitive white men born with forlorn yet ultimately rousing voices.

Since then our cultural frame has shifted, and broadened, but fortunately for Howard, so has his. While his new album Noonday Dream may estrange him from the folk-balladeer tastes that originally nourished him, his new material is his best by far: expansive, textural and quietly experimental, touching down somewhere between Arthur Russell and Alt-J.

It was released just last month, however, and tonight’s crowd – mainly nicely dressed couples on date night and cheery gangs of lads – are audibly pining for the earlier stuff.

When a few older songs are played in the encore – though not from his Mercury Prize-nominated debut album Every Kingdom, which isn’t played at all – the room roars like its on switch is flicked.

The main set is dedicated to Noonday Dream. It is a concert that must have employed a whole team of creative producers who, in turn, must have stewed themselves in Howard’s new songs.

Because like the songs, the stage has many moving parts yet they never jar. And like the songs, which really are a kaleidoscope of shifting moods, the show keeps changing configuration too.

Lights ascend and descend on poles, and blooming into being against a backdrop that mimics a granite wall are poetic visuals: an autumnal tree; figures moving behind frosted glass; nebulae and cumulous.

Nine musicians labour in meticulous service of Howard’s songs, including a trio of strings and two drummers, one encased in a plastic box to prevent sound spill.

Live, his voice is heftier than on record but he deploys its full force sparingly. His intensity is reserved for the work of articulating lyrics that zoom in to the personal (“Towing the line/I watch the host drink all the wine/And now she rambles”) and deftly out to the universal (“While the faithful dispose of a generation/And all of the mountains whisper knowingly”).

It’s a concert in which precision trumps passion but atmosphere this immersive can’t be summoned casually. This truth is evident in the stream of guitar-swapping, often mid-song, and audible in tones so warm you want to raise your Winter hands stage-wards.

In the egalitarian world of sound presented, equal care is bestowed on the detail, as in the larger gestures, in the manner of needlework. “All these small things they gather round me,” he sings on Small Things – one of his older songs, yes, but an apt description of how this show embroiders its lovely tapestry.