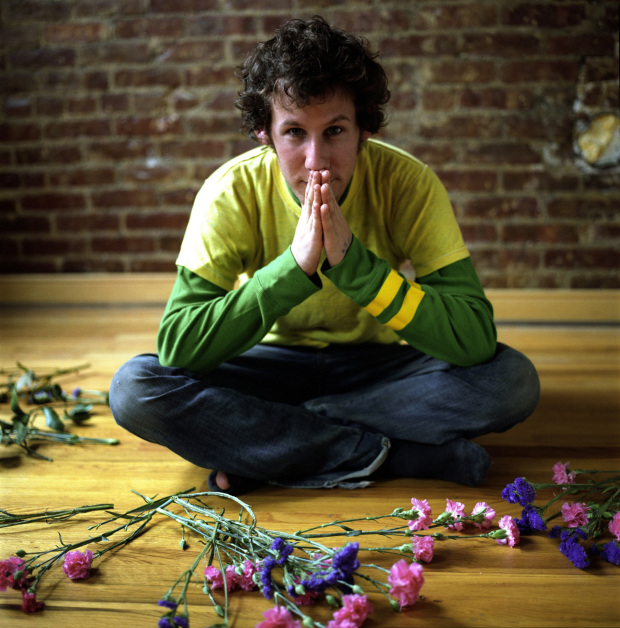 Hippies carrying pillows file into Paddington Uniting Church. An events company called My Heart Space is producing the evening and a guy in a company tee welcomes us. On a table dressed with pink candles and oil burners is a sign instructing us to ‘LIVE every moment’ and ‘LAUGH every day’. There’s a lesson about LOVE too, but a large pink heart obscures it.

None of Ben Lee’s support acts have begun, but already the church is full and people’s hearts fuller. Benevolent faces beam above spines that are Yoga-trained straight. Behind me a couple is just being: eyes closed, faint smiles, fingers lightly touching – the man wearing a round batik hat I haven’t seen this side of ’96. Nearby a guy waits in child’s pose, his girlfriend’s hand resting supportively across his coccyx. I hear a moist, spraying sound behind me, followed by an earthy aroma. Israeli-born opening act Nadav Kahn sits cross-legged on stage. “This is a Hebrew prayer about listening to and hopefully connecting with the greater unity in this universe.” Some young women in the front row begin to sway in appreciation and, after Khan’s perfectly enunciated prayer-slash-chant, everyone knows instinctively not to clap.

I’ve been to several gigs here. Most attended by the usual gig-going suspects wafting about uncomfortably looking for a pew, trying to mask their misery that the bar only serves chai. While the church is a wonderful space to showcase the hushed nuance of musicians like Grand Salvo and Joe McKee, it has never felt quite right. But hemp hats off to My Heart Space, because tonight it does.

The crowd occupies the church in just the way a church should be occupied: they are a flock, as one.

Avasa & Matty Love are next, a zenned-out, loved-up LA duo who strum guitar, tentatively, while chanting and harmonising. Their “friend, sister and yoga teacher,” Ciela Ruiz Naupari, joins them for a song that’s for “for the mama inside us all.” They smile a lot – and those smiles are LA-white and beautiful – but beneath the teeth they seem deadly serious.

I make my way to the bar, colonised for the evening by a gluten-free wholefoods caterer. On the way there, a My Heart Space employee asks me to duck the projector so Ben Lee’s cover art can maintain its steady glow above the altar. We’re not talking a slight craning of the neck – the projector is about armpit high (or limbo high for the more supple among us), but he asks so agreeably that I duck, agreeably, too. In fact, the air of agreeability is so pervasive I almost forget to pay for my punch.

At the bar, an array of nourishing-looking morsels are arranged, squatly, on plates. There’s no chai so I ask what brew is being ladled. “Kombucha punch,” the girl says. Confused silence. “It’s a probiotic drink,” she urges. “Good for your gut.”

Appleonia is the stage name for Jessica Chapnik Kahn (better known to some as Sam from Home & Away). She’s the wife of Nadav Kahn and the co-writer on Lee’s new album. Whip thin, looking like a cross between Regina Spector and Fiona Apple and backed by sparse electric guitar, she uses her powerful pipes to sing about “the wolves of karma howling.”

Her confidence far eclipses her talent, but somewhere in the orbit back to us she becomes oddly mesmerising.

Appleonia also tells us she’s reading a book called The Lost Bible. “It’s about symbols, like the crucifix and the manger, and where those symbols are in your body.” A sea of perplexed faces stares pleasantly and patiently back at her. “As in, where is the manger in your body? Where is the crucifix in your body? It’s pretty radical and revolutionary. This song is right out of that.” As if to prove the song is, indeed, “right out of” the book, Appleonia picks up the tome and begins singing straight from its pages. I’m reminded of the Spicks and Specks game in which Myf, Alan or a guest sings from the pages of some random book, though Appleonia’s version is funnier.

In beige pants and a pale pink button-up, Ben Lee personally introduces the fourth support act, Juan Ruiz Naupari from Peru, as “a teacher we can all learn from.” It really is quite the caravan of enlightenment Lee has arranged and, as the night rolls on, it’s hard not to appreciate his efforts.

Naupari’s sermon is translated from Spanish by his wife Ciela (who is also Lee and co.’s yoga teacher and Avasa’s musical collaborator). I begin to long for one of those infographics that precede complicated fantasy novels, mapping out everyone’s lineage. The combination of Juan’s fluid Spanish and Ciela’s soft-spoken translation is beautifully soporific. His words come in hypnotic waves of prophets, deities, spirits, concepts and revelations. In just 10 minutes, he ticks off The Southern Cross, Incas, The Bhagavad Gita, Herman Hesse, attaining perfection, Medusa, our divine nature, Shiva, suffering, Buddha, egos, Hinduism, ancient Greek gods, awakening, a golden eagle and a message from the future.

“Thanks for coming along to this experiment,” says Lee in a boyish Aussie accent, settling in the pose du jour: cross-legged on the stage. Applelonia is by his side and his band (pretty much all of the support acts) surround him supportively.

But wait, an experiment? Does that mean crowd participation? I log my closest exit.

“My spiritual path and my musical path have become intertwined,” Lee explains, redundantly. More than anyone else this evening, though, he’s relaxed and lighthearted, and it actually feels like we might be in for something fun. “This is more like a prayer than a concert. There’ll be some awkward bits and some failures. If we can stick it out together, it’ll go for about an hour, then I’ll play you some catchy songs.” He laughs. “It’ll be like having dessert.”

They begin with the record’s first track, ‘Invocation’, and move through Ayahuasca: Welcome to the Work in order. It turns out Lee’s apology isn’t required. Together they nail every song – no small achievement, since ‘Welcome to the House of Mystical Death’ scales a crescendo as joyously twee as The Polyphonic Spree and several songs are just meditative piano or experimental sounds and samples.

To conduct the banquet of harmonies that is ‘I Am That I Am’, Appleonia sits among the girls in the front row who, by now, are in Manson Family-esque ecstasies. Lee and band sing it so rousingly that a middle-aged man next to me announces, “I’m feeling all wriggly!” and flies to his feet to dance before squirming to the rear of the room to incite people into some free-form moves of their own.

The church feels increasingly like a Deep South revival meeting with the gospel threads of the album teased out to full effect. And while Reverend Lee doesn’t talk much about ayahuasca – the hallucinogenic healing brew his album is about – the positivity filling the room is the same I was surrounded by in 2011 when I travelled to Peru to participate in a shamanic healing ceremony.

I reacted skeptically on hearing about Lee’s album. That skepticism turned to grudging respect when I heard it (and enjoyed it) and – after tonight’s fun, brave and at times ultra-silly show – I like him even more. “After I made this record I thought it might be my best music yet, but I thought I was committing career suicide,” Lee says.

I’ve taken ayahuasca and tried to write about it. I know from experience that Lee’s attempt to create a ‘sonic document’ of his ayahuasca experiences is ambitious to the point of unachievable. He knows that too – “As with any attempt to capture the experience of transcendence, it is ultimately a failure” – but he did it anyway and, in the process, didn’t fall too short of the mark.