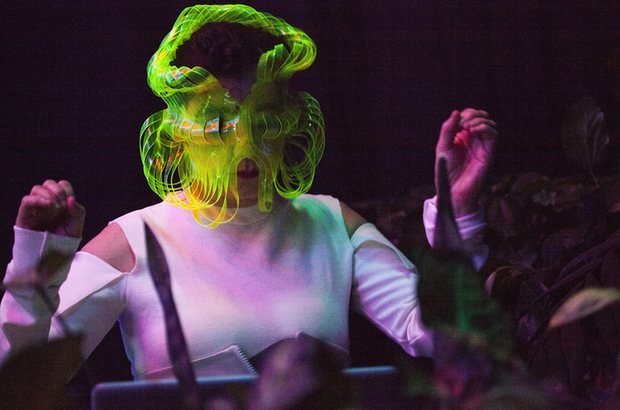 First published in The Guardian, June 2016

“So what’s the verdict?”

He is young and camp with fluorescent glitter circling his eyes and narrowing to points on his temples. Like many here he is dressed wildly, beautifully. He’s very high.

There must be many versions of the Björk Digital opening party at Carriageworks on Friday night and with each, a different verdict. The world premiere event had the meandering choose-your-own-adventure freedom of a rock festival with one key difference: just one artist was featured. This was a five-hour festival of Björk. 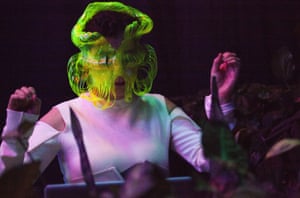 Undeterred by rain, a contingent of keen beans arrives for doors at 6pm. They beeline it for Bay 17 – one of Carriageworks’ marvellously vast industrial spaces – where Björk is DJing. Smart move, arriving early. For Björk is not – as one friend had wistfully hoped – floating above the crowd spinning records in a perspex bubble. No, this neophyte DJ is ensconced in a corner, in a fernery, visible only to the knot of dancers that encircle her. It tastes a bit bitter. Who doesn’t want to eyeball the woman described by Guardian Australia’s Brigid Delaney as “more stardust, rainbow particles and creative genius than flesh and bone”?

But there is a logic to the crowd’s configuration too. A process of natural selection that Björk – a fan of nature in her art – would no doubt endorse. Those who arrive earliest are the most devoted, thus the most qualified to arrange their bodies in an armour of adoration against latecomers too casual to deserve a peek.

From a viewing platform I see her amid monstera plants, wearing white, her head a glowing green orb. She dances crazily to Zara Larsson’s Lush Life. Aside from the occasional pop track like this, it’s a doggedly eclectic mix. Bollywood, oriental chimes and an industrial dance track so punitive it’d turn Squarepusher pale. But the half-lit, half-full room is full of languid half-dancers.

Floppy arm syndrome is rampant. People waft in and out. Though no one seems dissatisfied. If a night of wafting is in order, Carriageworks is the ideal place to do it. The queue for the virtual reality room is an hour long but the bar queue is short – and no one minds if you duck out.

The crowd is mainly chatty old-school ravers and artfully dressed women in their 40s. In the ladies, women take full-length photos of other women’s outfits and new friends are made, if just for the night. Everyone is here because they adore Björk and that alone cuts a surprising amount of second-guessing from interactions.

Ironically, given this is an evening dedicated to a single woman, it is this communion with Björk fans that warms me most. I end my night in the cinema, luxuriating in old Björk clips on the big screen. Knowing that she – that captivating face, that brave raw voice – is in the room next door brings a strange edge to the nostalgic act. Some men get up to swing dance to It’s Oh So Quiet and we watch them, fondly.

A Carriageworks employee enters. It’s nearly 11pm and he’s come to tell us to go. But perhaps he feels the collective inhale too, the weepiness that even now, 20 years on, Hyperballad’s feathery beats induce. He waits until it’s over.