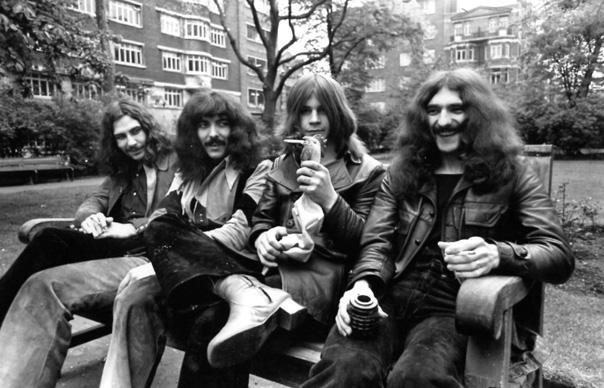 Would it be bona fide metal heads at Black Sabbath’s first Australian show since ‘73? Or boomers clutching pre-paid parking tickets, prepped for a zippy exit? The answer is at the outdoor merch tent where a throng wearing black tees is jostling to buy yet more black tees.

Inside, it’s a blur of Motorhead, Iron Maiden, Cannibal Corpse, Danzig and Tumbleweed tees worn by metal heads young and old, round and reedy, bearded and bum-fluffed. It’s like an infographic of all the bands influenced by Black Sabbath came to life – then came to the gig.

When the ‘War Pigs’ siren sounds most fans are caught out partying by the bar. Any glimpse of the stage I manage during ‘War Pigs’ eight-minute epic is through a tide of latecomers doing the devil horns.

I can hear it though and when Ozzy Osbourne starts chanting “Hey! Hey! Hey!” as Tony Iommi solos, I start to strategically apply the cognitive dissonance I know I’ll need to enjoy the show: ignore the cringey bits; revel in the riffing.

Because while Osbourne can still shriek-sing at an ear-quailing pitch and his stage antics – like drenching the front row in the buckets of water he uses to douse his head – have become amusing rituals to behold, his crowd gee-ups are simply unbearable. Osbourne may have enjoyed prime position for four decades of Iommi’s dark, down-tuned guitar work, but I haven’t and I want to hear every second.

Though judging by the response to ‘Into the Void’ and the boofheads who keep booming “Ozzy! Ozzy! Ozzy! Oi! Oi! Oi!” maybe I’m alone in my irritation.

Bar drummer Bill Ward, it’s the original line up with Geezer Butler on bass. The opening riffs of ‘Under The Sun’ – still some of metal’s weightiest – are evidence of how little the lightweight pop culture freak show that surrounds Black Sabbath – due to Osbourne – aligns with their truly heavy sound. It’s hugely satisfying to hear their sound remains intact and to watch Iommi play – his