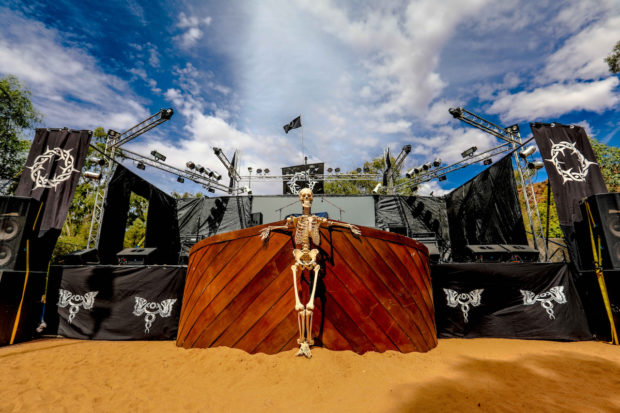 Drive 1,500 kilometers south of Alice Springs and you’ll reach Adelaide. Sixteen hours north is Darwin. These are the closest big towns. Alice (as it is known) is red dirt country – traditional home to the Arrernte people and four hours from Australia’s most famous rock, Uluru.

A return flight to Alice from Sydney or Melbourne costs about $700. It’s no casual weekend away but fortunately for the town’s annual heavy metal festival, Blacken, metal-heads aren’t casual types. Despite the distance, Blacken has grown over five years into one of Australia’s most uncompromising metal events, this year luring 30 bands to play over the Easter weekend.

The town’s isolation suits metal’s fist-in-the-air tropes of brutality, resilience and survival. It is hot, dry and dusty: Mad Max terrain. The water “is OK to drink”, I’m told, “just don’t put it in your car”. On Good Friday the only shop open sells fuel, firewood and whole, hairy roo tails. Alice can’t shake its frontier feel – ironic, as it’s also home to the Pine Gap global surveillance station, run by the CIA and the US National Security Agency.

Birds of prey are circling when we arrive at the Gap View Hotel on Saturday. The flinty cliff behind the stage is part of an escarpment called Heavitree Gap. The gap was a sacred men’s space for the Arrente people and some Indigenous women still walk the long way around. This story endures at Blacken – the main stage here is men only too.

A band from Tennant Creek (population 3000) kicks off with some jam-band blues-rock. I’m pretty sure the singer is wearing a shower curtain. When AC/DC’s Back In Black comes on, people start air-drumming in the beer queue. Over by the merch stand you can get your face painted as Abbath, Alice Cooper or Mayhem’s Euronymous and I’m reminded why metal is so fun. There is none of the cloying reverence that dampens other scenes and, here in the Northern Territory, things are looser still. Blacken doesn’t try to cast the net too wide. The main stage acts are thrash, death, black, doom, dark or extreme metal. Theatrics and technicality reign, as do blast beats and guttural growls. Adelaide’s Beyond Mortal Dreams stand apart by playing grim death metal that is so icily precise and devoid of show-ponying that people just stand and stare.

At times, the masculinity is pungent. One mosher’s moves are not intended as swinging punches but they’re certainly dodged that way, as are his head-high kicks. He’s haloed in dust; lost in oblivious entitlement. By nightfall, I’ve had it. I march up for a fast and furious say. He hears me out, gently. He’s come alone from a small community 500 kilometres away. “I repress my emotions too much,” he says. “This is how I express myself.” He mails his denim jacket to his grandma, he says, who sews on his metal patches and mails it back. My rage melts away.

The festival is run by local label, The Black Wreath, helmed by a guy called Pirate. He prowls the grounds in 30-degree heat in camo pants and a leather jacket. Hugs, handshakes and shoulder rubs follow wherever he goes.  His roars and derisive sneers in Exdemission are like Gollum duelling Sméagol. “Last year they said the festival sounded like demons being strangled,” he says to the crowd. “It was the nicest thing anyone’s ever said.” A ratty couch is barreled into the pit and Pirate completes the set being ferried around like an Emperor on a litter.

The weekend teems with “only in outback Australia” hilarity. Like when Doomsayer (real name Paul) from Beyond Mortal Dreams stops to marvel at a huge praying mantis advancing across the stage. Or when I realise my chat with a national park ranger about saltwater crocodiles is sound-tracked by a band called The Kraken. A local kid says the headlining band, Whoretopsy, is planning to orchestrate a wall-of-death. “I’ve never done one before,” he says.  “The crowds aren’t usually big enough in Alice.”

He’s been coming to Blacken since he was 14. That year, he stayed up the front all day and night. He’s had persistent tinnitus ever since. “I’m going to bring a garbage bag of earplugs next time,” he says.

Melbourne thrashers, Desecrator, drove to Adelaide for a paid gig, left the car, and flew to Alice. “It was the only viable way,” says singer, Riley Strong. The whipthin drummer from Miazma, meanwhile, broke his collarbone a few days earlier in a high-speed motorbike chase through the bush. He darts around – arm in a sling – doing frantic back-up vocals and wind-milling his hair.

Ultimately, Blacken is a trip to Australia’s dead centre to discover that metal’s best clichés endure. The community and camaraderie; the stamina and strength. The dedication, despite the odds.

***
Subscribe to The Wire magazine here.
Original article (for subscribers) at The Wire here.