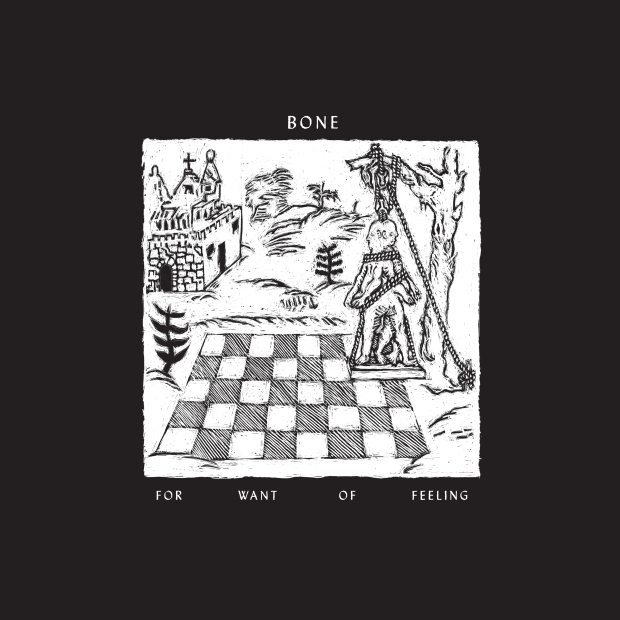 Bone – For Want Of Feeling

From its first bleak note to its last, For Want Of Feeling functions like a cleanse of the toxins left by pop music’s excess. The Melbourne band use rock music’s tools – guitar, bass, drums and vocals – but deny themselves the gluttony of rocking out, in the spirit of post punk’s more didactic fringes; bands that chose intellectualism over animalism.

These imposingly joyless songs have a fundamentalist rigour where indulgences must be atoned for. If a single guitar note is left to extend, as on Pedestal, others are clipped spitefully short. When ‘See The Boy’’s bassline makes a break for optimism it’s pummelled flat by heavy guitar and cymbals. Songs maintain holding patterns, circling but rarely unleashing, as if to lose control would be a weakness. “You let yourself get too damn ripe/now there’s no living seed underneath your hide,” sings Jon Shub on ‘No Seed’, his voiced rough with distortion.

The oppressiveness of seminal metal band Godflesh is present, though there’s joy in Godflesh’s tank-like chug and no such luxuries are permitted here. Like the best heavy music, however, its intent weighs heavier than its sound and there’s glory in its outsider feel. It communicates on its own terms, aiming only to deliver relief to those who find communion in desolation, slicing out the others like an Ockham’s Razor.

Like this? Try these: My Disco, Cancer; Ghosts of Television; Forgotten Empire