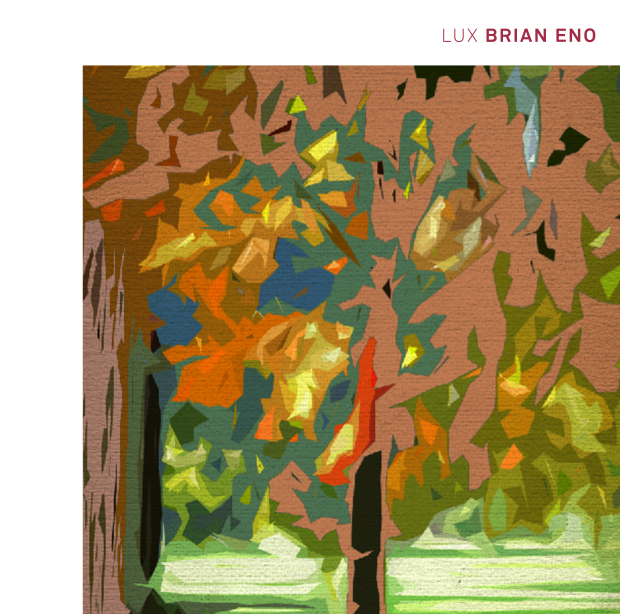 Brian Eno built his career by being patient with music and impatient with its confines. The former saw him pioneer ambient music in the 70s while the latter freed him to explore production, visual art, festival curation, writing and other oddball projects.

Enjoying a high strike rate of acclaim, Eno came to occupy an enviable realm where he’s recognised by most, accessible to many, yet answerable to no-one. So when he casually resumes a series 37 years after starting it, barely anyone blinks.

The first part in Eno’s Music For Thinking series was 1975’s Discreet Music; the second was 1993’s Neroli. Lux is part three and Eno’s first solo offering in seven years. While the listening experience is uncomplicated, the back-story is not, typifying Eno’s increasingly restless multidisciplinary approach.  Lux was commissioned by the Great Gallery of the Palace of Venaria in Italy to embellish an art installation. As a hat tip to 1978’s Ambient 1: Music For Airports, Lux was then previewed at Tokyo Airport for four days. To balance out the high art hoopla, the public was invited to submit photographs online to illustrate the album’s streamed launch in what was called the Day of Light.

Split into four barely distinguishable episodes, the 75-minute composition is a return to Eno’s minimalist soundscapes.

Composed of elongated strings dimpled by notes that ripple outwards like drops in a pool – piano tinkles, resonant bass plunks and gently droning metallophone chimes – Lux is a serene composition that makes so few demands on your attention it’s hard to resent the fact it doesn’t always hold it either.

If Eno’s goal was to create a meditative space to encourage thoughts to take root and grow, Lux succeeds. But so did Discreet Music. And so did Eno’s later ambient releases (not just those in the ‘Thinking’ series). Most of these, like Lux, also satisfied the deconstruction of the boffins who praised their sophisticated internal harmonic logic.

Thus, while Eno’s return to the pure ambient form doesn’t disappoint (because Lux, largely, is wonderful) it does deflate heady hopes he might have slapped down a new trump card. Hopes that a man so versed in innovation might have done something truly, wildly exciting. Instead, Lux operates as a reminder – not as a revelation, as it did three decades ago – that Eno is the best in the ambient business.

Though the reminder is timely. In September, Eno released his second iPad app, Scape, in which users arrange visual elements to create their own ambient music. “Here,” Eno says. “Think it’s easy to make an ambient masterpiece? Try it yourself.” And they did, by the droves. But after absorbing Lux’s seamless, brooding beauty, one wonders how many of these neophyte composers decided to keep their day jobs.