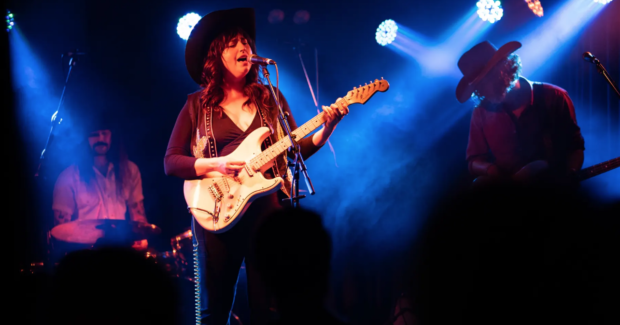 
Down the length of some of Sydney’s main drags, plenty of people look to be failing at having a nice night out. It’s just gone 6pm but queues have formed at even the greasy old holes as if they were buzzy new clubs at midnight. Newtown venue The Vanguard was the first to reprogram live music two weeks ago. An easier task, perhaps, as a small, seated venue that pulls a more mature crowd. Tonight it’s iconic pub rock venue The Lansdowne’s turn, with boisterous alt-country act Caitlin Harnett and the Pony Boys playing the 250-capacity band room to a maximum of 50 seated and socially distanced people.

The hotel owner Jake “we know how to fucking throw a party” Smyth is leaving nothing to chance. The young entrepreneur co-owns multiple Sydney establishments: Circular Quay’s Mary’s Underground (previously The Basement), Paddington’s Unicorn hotel and the original game-changing Mary’s Burgers in Newtown among them. Yet he’s here in a Bonds singlet with a dishrag slung over his shoulder, ushering people to their tables. “I’ll get that candle relit for ya,” he says.

The Mary’s Group booker, Joe Muller, is here too, making himself useful. “I don’t even usually work in the venue,” he says. Nothing is usual anymore though, Joe. The bar’s gotten so rusty during lockdown that the tonic has run out and the beer taps are broken. Tinnies all round!

At the bar, despite some gaffer tape on the floor, no one knows where to stand. The ticket email had stressed it was a “strictly seated show” and unlike the cowboys of the nation’s shopping malls, people here are anxious to play by the rules. In the Pisstine Chapel (the bathroom) a man emerging from a cubicle visibly jumps as I come in. Maybe it’s a pandemic thing or maybe he’s not used to gender-neutral toilets; I let the mystery ride.

As she’s escorted over to her friends, a woman exclaims: “This service is amazing.” I’d hazard the man here with a cane agrees. As the Melbourne songwriter Jen Cloher recently said, her live-streamed shows were a blessing for fans to whom a rowdy standing gig was inaccessible. It seems the pandemic’s next act – seated concerts with limited numbers – is too.

In Melbourne, venues still kicking from the 80s have a legendary, never-changing air. In Sydney, first the pokies and then the lockout laws have made their extinction ever imminent.

They’re like Phoenixes perpetually rising from the ashes; literally so, in the Lansdowne’s case, after a 2013 blaze. The upside is our city’s eagerness to embrace new things such as the Lansdowne’s rooftop, completed during lockdown, and pre-emptively opened last week.

While, yes, it’s another Mary’s Burgers joint, the space entitles the hotel to another 50 people. Add that to the 50 on the ground floor and the 50 seeing the band and it’s a proposition worth opening for.

Harnett is a good choice. While a few of her mid-tempo Americana numbers slow-burn their way into samey-ness, her voice is like Mazzy Star’s Hope Sandoval was jerked out of a long sleep and she’s just the kind of wise-cracking loose cannon opening night needs. “You can’t stand on the ground,” she says. “But there’s no rules about not standing on your chairs.”

Announcing the show on her Instagram page, Harnett had written: “You might be thinking – fuck, I ain’t ever paid $35 for a Caitlin Harnett and the Pony Boys show but you should cos we’re worth it and it’s time to pay up baby!”

She’s right to be unapologetically shoving her fans into this new world order, where paying to see local bands you’ve either never heard of, or haven’t ever paid to see, will become more common. She’s right, too, to brazenly encourage people to eat and drink onsite. “Let’s play a drinking game,” she says. “Every time there’s a Tom Waits reference in this song, you drink. And then go to the bar and order another!”

The reliance of music venues on bar take isn’t ideal. Neither is the industry’s broad reliance on sponsorship from alcohol brands – music and booze shouldn’t be joined at the hip. But if the prime minister, Scott Morrison, were to wade in, he’d finally have it right, because now isn’t the time. Now is the time to leave your $11 Aldi six-pack in the fridge and arrive early to drink at the venue.

Because while Harnett and The Lansdowne did a great job tonight making us feel the rubber had hit the road on live gigs again, in truth the wheels are still shaky. With overheads as high as ever and tickets limited, if venues can make it work they’ll need audiences’ help more than ever. Then perhaps we’ll look back on all this positively as the start of an era in which people saw the musical riches in their own backyards again.