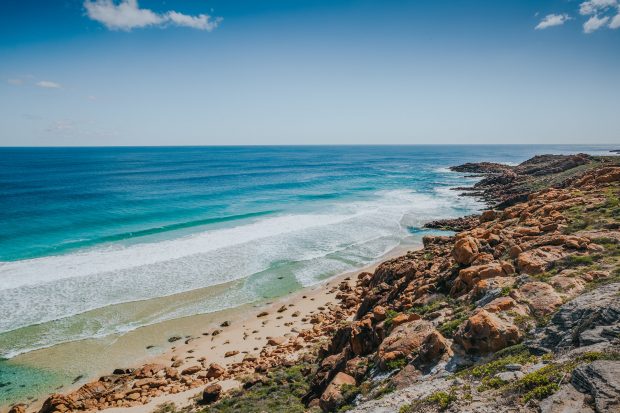 First published in The Australian, September 2021

When our guides leave late on day one, it’s as if they fade into the scrub. That’s how tightly tucked Injidup Spa Retreat is in the acacia, pig face, kangaroo paw and beard heath that carpets the coastline of Leeuwin-Naturaliste national park. And yet. “I go past 16 wineries, four breweries and a chocolate place on my way home,” says our Walk Into Luxury guide, Rusty, of his 20 minute drive through the Margaret River region to Cowaramup.  “Sometimes I even make it without stopping.”

The luck Rusty feels to be living in Western Australia’s stunning southwest pervades a visit here too. Especially for travellers from ‘over East’ (as westerners call the lot of us) for whom merely making it to Perth, without any ruinous inflight announcements, is worth a few fist pumps. And is a sign, I hope, of new habits of thankfulness that won’t end when the pandemic does. 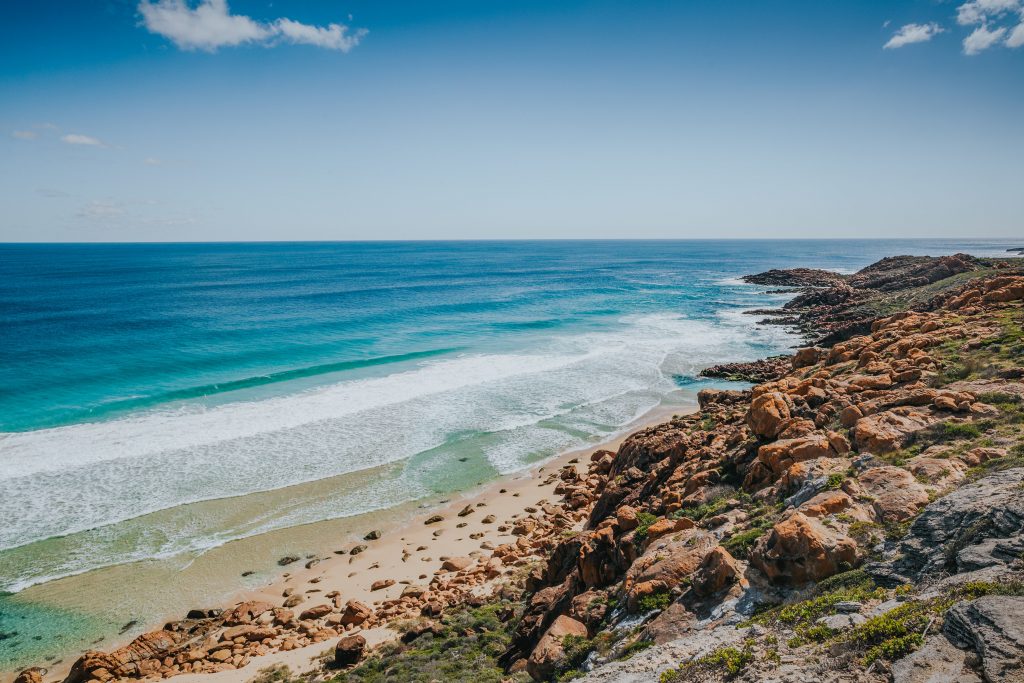 I’m here to do the Cape Naturaliste to Cape Leeuwin walk. Though a declaration of “I’ve done WA’s Cape to Cape” wouldn’t pass the pub test because the trek is 135 kilometres long and packed with beaches – romantic in theory, remorseless on the calves in practice. Walk Into Luxury’s version takes guests to hopping off points for each day’s director’s cut, with only brief sand meanders.

It’s a four-day gluttony of glittering water views. The itinerary includes a private chef one night and meals in hatted “Margs” restaurants but the real luxury is by day, with guides taking care of tracks and snacks. Our only job is to try to keep a grip, for dignity’s sake, on roughly where we are along this fearsomely beautiful coast. “A lot has changed in the past 30 years but the coastal track hasn’t,” says our second guide, Shane.

This is Wardandi Country, in part of the southwest where many original Noongar place names remain: Quindalup, Gnarup, Koolarup, Dwellingup and Manjimup are just a few. The suffix ‘up’ means ‘place of’. Wilyabrup is the place of the northern sky. Injidup is the place of the red pea flower. Each name thus invites the question: what is this the place of? Is that plant, animal or feature of the land, sea or sky still here? Is it being cared for?

Late afternoons, pleasantly sore post-walk, are spent seeing the sun ooze into the Indian Ocean from our private back decks. The turn-off for the retreat is on the track itself, a short amble from the limestone cliffs. You’d barely know you’d arrived if you weren’t handed the key to a villa stocked with local food, wine and a cheese with breezes so omnipresent when the fridge is opened it reminds me of that time in the south of France when we had to dig an actual grave for a wheel of Époisses de Bourgogne to rest in pungent peace.

“Are you ladies all on the run from your partners?” asks the sole bloke, Jason, of our group of eight. All of the women, bar one, are Western Australian. They overtake me when I crouch to delight in the fractal patterns of the shark tooth wattle or the pink pimelea with comments such as “Lovely! That one grows well in my garden,” bursting my wildflower bubble. No sooner do I point to a white arum lily in the Boranup karri tree forest than a hand shoots down to rip it roughly out. “Funeral flower,” she says. “Terrible pest.”

Our walk to Wilyabrup sea cliffs is like bush-bashing through a bouquet of the kind of waxy, wiry Australian natives that last in a vase for months. Brushed against, the oils of the melaleuca (tea tree), native rosemary and boronia (one of the world’s most expensive perfume bases) release their fragrance. Blended with the salt-spray air, this outdoor apothecary of peppery, lemony and woody scents is a remedy for any sore heads from one wine too many the night before.

Everything’s a bit different for an easterner, such as the bulbous marri tree gumnuts that inspired May Gibbs’ book, ‘Snugglepot & Cuddlepie’. For a few weeks in spring, the cowslip orchid and the pink enamel orchid are among 100 others that bloom between these two capes. They’re dormant now but pops of colour and pattern are everywhere. On a beach close to Yallingup, the state’s most exclusive postcode, I beachcomb my way across what looks like the debris of a shipwrecked Etsy.com container vessel: macrame-like clusters of orange coral, puffs of flamingo-pink sea sponge and ropy black seaweed.

And then there are the waves. “You don’t get anything like this over east,” says Shane. The Margaret River Pro surf competition is happening close by and the six foot waves have risen to the occasion. “Look at the time it takes for the wave to fall,” he says. “It seems to be going in slow motion but that’s because it’s falling from a great height.” The series of perfectly straight ridges we see was “made in Antarctica”, Shane says. “Made by what?” I ask, feeling a tad idiotic, as if I’m asking where food comes from. “Wind,” he replies.

Standing on the cliff above a famous break called Bear’s Bommie are five or so surfers. They are still and silent; horizon stares beneath their sun-bleached hair. The gravelly sound of a board being waxed comes from behind a van. I wonder how they get down and then see a narrow track flowing vein-like through the scrub to the sand. We sightseers are not given even a sideways glance in this deeply local place.

Shane, like author Tim Winton, is from Albany. Parts of Simon Baker’s 2018 adaptation of Winton’s novel, ‘Breath’, were uncannily similar to Shane’s own boyhood surfing, he says. I ask where along the coast the sharks are getting the surfers. “Well, here,” he admits. “But there’s more people in the water now, more helicopters and yes, more sharks. But the hype isn’t in line with reality.” He pauses and laughs. “That’s what I tell myself every time I paddle out anyway!”

At night back at Injidup (another famous surf break), a skein of driftwood decorating the wall above my bed, I look up some quotes from ‘Breath’. “I lay awake as distant waves pummeled the shore,” Winton wrote. “The earth beneath us seemed to hum. I used to get out of bed and lie on the karri floorboards and feel the rumble in my skull. It sang in every joist of the house.”

To walk this coast during a big autumn swell is to get a glimmer into Winton’s inspiration, even if you don’t paddle out yourself. And to learn some other poetry too. The surf forecaster calls these waves a long period swell. The surfer? Corduroy to the horizon.