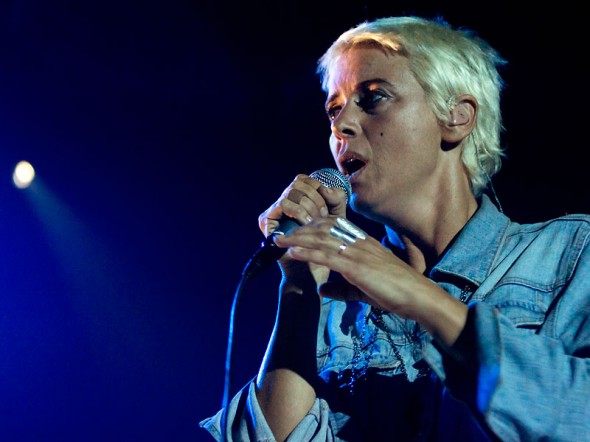 Once upon a time, Cat Power shows cleft audiences in two. So grievous was Chan Marshall’s wrestle with the most elemental aspects of performance – remembering lyrics, finishing songs, singing beneath stage lights – that half the crowd would tire of the train wreck. Meanwhile, the other half would shriek affirmations from the darkness that only seemed to mire her further in the muck of self-doubt.

Levitating from the mess, however, came Marshall’s shot-with-air voice, hobbled only by hesitant licks of piano or guitar. That astonishing voice elevated a decade’s worth of shambolic shows to five-star experiences. Like it was nothing.

In 2006, Marshall cast out her demons (booze, mainly) and last year released Sun, an album she called “a rebirth”. She cropped her hair, recruited an all-female backing band and hit the road. But expectations she would be all new-found showbiz sheen were confounded by this show. During ‘Silent Machine’, ‘Manhattan’ and ‘Human Being’, she was uncomfortable with her vocal levels, pointing up then pointing down, with the backing singer filling out songs that would have died early deaths had Marshall been playing solo.

Stop-start indulgences are difficult when the band ploughs on, making it seem likely her habits of self-sabotage would have resurfaced had they not been steamrolled by the juggernaut that is a rocking four-piece band.

With a few exceptions – such as the faultless closing track ‘Ruins’, which led into a touching farewell where Marshall catapulted flowers into the audience – Sun‘s songs didn’t connect. That didn’t stop people in the crowd from cheering supportively and slow-dancing their way through the boppy R&B confessional of ‘3,6,9’.

The real moment of transcendence arrived when the backing band backed off, the lights dimmed to deep red, and Marshall sang an unfamiliar song all-but unaccompanied, reaching for, and receiving, the rare, raw beauty that still sets her apart from the rest.

While the show was as hit and miss in its glory as her gigs of yore, Marshall’s disembodied delivery of her new songs sapped its sense of ownership, as though she were gripped by a growing conviction the songs belonged to someone else.