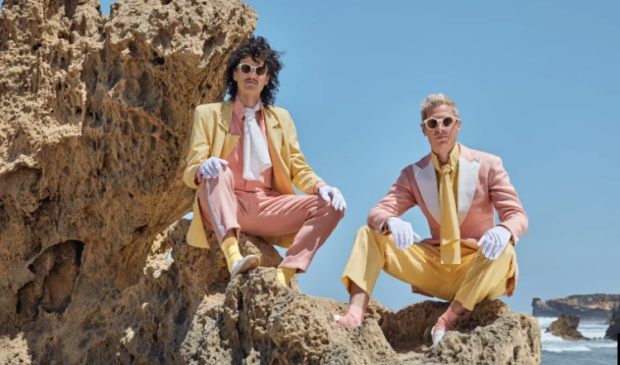 During intermission in this live-streamed gig on KFC Australia’s Facebook page, raising awareness for mental health service, ReachOut, Client Liaison’s keyboardist and producer Harvey Miller has changed from a green velvet suit into a billowy all-white affair with a turtleneck beneath.

Meanwhile, singer Monte Morgan – he of the curly mullet and pencil moustache – is mincing about in a sequinned jacket. A disco ball lolls in the crook of the couch where, earlier, Morgan had drizzled champagne into some 70s-style crystal coupes while singing Champagne Affection. Despite the stream dropping out occasionally, the gig is one of the best productions yet of the local live-stream era.

Production is the key word: there’s oodles of it. And at this point in the pandemic, with its glut of homespun, solo and stripped-back shows, we needed something shiny and maximalist. We needed a show – and a band with the affectation to pull it off.

Even if Client Liaison’s “faux-fi” apes late 80s synth pop acts a little too devoutly, you can’t argue with the great sound, multiple cameras, and green screens featuring cityscapes, jungles and astral travel. They even beam-in a sax player on Queen.

Another act might deem a concert for a fast-food franchise to be the apex of selling out. Not Client Liaison. They’re branded up the wazoo already – their own brand, that is. They have an animated logo, a fashion line and recently launched a petition to re-brand the floundering Virgin as Ansett Australia.

So holistic is the duo’s pastel-coloured pastiche of Brat Pack meets Miami Vice meets kitsch 80s Australiana that even an icon as big as the ubiquitous chicken slingers’ is engulfed by it. Which is precisely the point, marketing wise. You can only hope Miller and Morgan are half the slick negotiators their gleaming cufflinks suggest because such carefully crafted cultural capital should not go for cheap.

To people who say their music is too derivative, Miller has asked why no-one derides rock ‘n roll bands for the same mimicry.

And where are those rock ‘n roll bands now? Bands that traded more than anyone realised on relics from the past: the flesh and sweat and energy of real-life gigs. There are new alphas now.