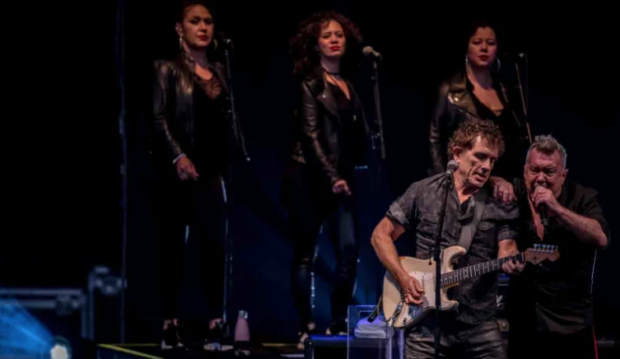 In January 2020, no sane marketing person would promote Cold Chisel’s “first ever” outdoor summer tour as they did last October when tickets went on sale: “There’s nothing more Australian than hot sun, warm waves and Cold Chisel.” Yet seeing “Chisel” is a chance to heal too. We may be distressed by the ravages wrought on the bush, the beach, the fresh air and the animals but the Australian institution that is Cold Chisel remains unchanged, extending us a hand to join them, if only for a night, in feeling great about being Aussie-as, mate.

The tour is only theoretically to promote new album Blood Moon, though we do hear a smattering, including Land Of Hope and Getting The Band Back Together. Practically, it’s a chance to play the hits and few were eschewed.

The zero-theatrics way they blaze into opening song, Standing On The Outside, reminds us powerfully of their pub-rock cred. Already, Jimmy Barnes’ face is scrunched-up in his giving-it-all-bawl and the cameras have begun their evening-long showcase of Ian Moss’ immaculate high-slung guitar work.

On a first visit to Parramatta’s massive new stadium, we can forgive its wobbly thrum of sound debris as inherent to an outdoor rig. The visual production is less excusable given it’s impossible for most here to actually see the stage.

This is usually where screens step in – unless they’re too small to show the whole band rock. Instead, we get the sensory dissonance of two-plus hours of hearing Cold Chisel gel beautifully as a band but seeing only one member (usually Barnesy or Mossy) do his “bit” at a time.

Visibility worsens during Cheap Wine, when the screens fragment into a grid pattern and during Flame Trees, when red special effects are applied. Then there is the madness of giving just a few seconds of footage to the three women (Mahalia Barnes, Jade MacRae and Juanita Tippins) on stage, whose backing vocals pluck tonight’s songs up from the inside to beam angelically out.

While songs such as Bow River, Saturday Night and Four Walls momentarily transcend the tyranny of distance, visually, the revolving door of individual show ponying undermines the sense of unity and togetherness we came to sponge up.