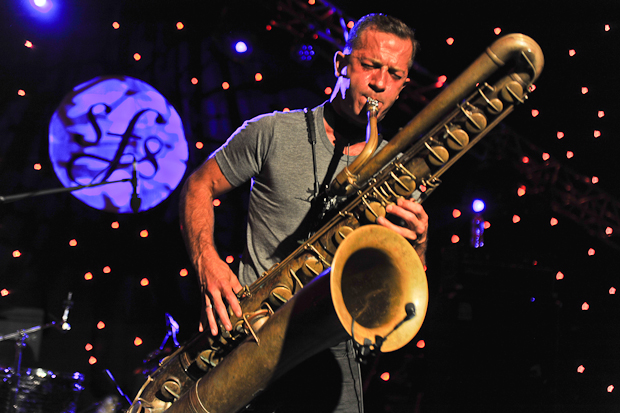 With his straight back, strong hands and banker’s hair, the physique of experimental saxophonist Colin Stetson looks as purpose-built as a dancer’s.

No wonder he is strong. The Canadian – a touring member of Arcade Fire and a collaborator with Feist, Tom Waits and Bon Iver – has developed a technique of circular breathing through a huge bass saxophone, its weight supported only by his hands and a neck clip. Each show must take a bodily toll as unmapped as the sounds he summons. You might not think a solo saxophone (he also plays a smaller sax) could teem with guitar shredding, techno beats, the frenzied solo of a first violinist or an industrial chug – but all this can be heard in what Stetson’s lungs wrench out. His continuous breath creates a tidal push and pull amid a plaintive flute-like fluttering and muffled booms like underground explosions.

Using just breath, brass and fancy, Stetson creates something wildly inventive. But not everyone likes its intensity. There is an early dribble of deserters and one woman thuds down the tent’s wooden stairs and rents the tent asunder in her eagerness to leave. Most stay.

There is more: Stetson also sings through his sax. Though it is not voice, but noise that reaches us, having been transfigured by its journey into an something like an underwater scream. The noise is all soul and no shape, feeling its way forward like an eyeless earthworm, sometimes foghorn-deep and mournful, sometimes rasping and distressed.

What astonishes most is that Stetson does it all at once, all alone. Close your eyes and you’d swear more musicians were on stage; open them and it’s just him, biceps hard, eyes screwed shut, cheeks puffing in and out as he rocks to keep time.

Poised to play a song called ‘High Above The Grey Green Sea’, Stetson first asks: “Do you know about the loneliest whale alive?” We don’t, so he tells us. In the Pacific Ocean, scientists have followed a whale for decades whose song is a few hertz off normal whale song. It may be a species unto itself, it may be deaf, but either way, says Stetson to a crowd as hushed as a child during a bedtime story, the whale is doomed to communicate in isolation from other whales until it dies.

“This song too is about calling an unanswerable cry and the tragedy but also the hope of that.” And with our expectations raised around the story’s high pathos, Stetson raises his saxophone to his mouth and meets them.