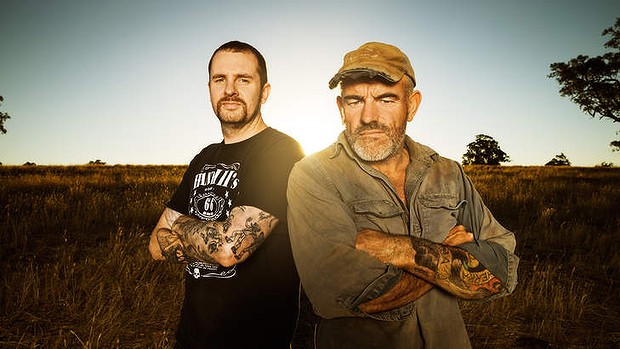 The documentary Victorian punk rockers Cosmic Psychos are supporting with this tour is tag-lined “30 years and a million beers with Australia’s most unlikely rock and roll heroes”.

It begins with producer Butch Vig and members of Mudhoney, The Melvins and Pearl Jam talking about Cosmic Psychos’ influence on grunge and Psychos’ singer and bassist Ross Knight reflecting on all the fuss saying: “At the backa moi head, I was thinkin’, well I’m a fuckin’ farma.”

Called Blokes You Can Trust, you could be forgiven for thinking said “blokes” were Vig, Vedder and company. If an American rock icon says it, it must be true right?

But filmmaker Matt Weston focuses on the band’s American ties not because he’s reflexively sourcing Australia’s cultural validity offshore but because the interplay between the bogan rockers, formed in ‘82, and the American bands who admired them is where this story’s poignancy and hilarity is found.

The 6pm Paddington Chauvel screening, however, is no ordinary audience. The quarter-full room compensates with half-drunk rowdiness, with many jaunting to the bar and back like it’s a seated gig. On cue, as the film finishes, a guy yells out: “When’s the party bus loiving for the Metro?”

While uber-masculine yobbo-rock permissiveness seems like something to celebrate onscreen, its offscreen reality is less appealing at the Metro a few hours later, especially as a woman amidst legions of leery guys.

Though it’s lucky they’re so well-oiled because the set begins – or doesn’t – with 20 minutes of laboured guitar tuning. The virtues of digital tuners have been lost on Knight and his bass won’t behave. As his technical problems escalate, drummer Dean Muller, bored, wisecracks from the safety of his stool: “They’re starting to refund your money at the ticket office.”

The crowd don’t mind. In fact, the band’s shambolic descent, before they’ve even played, is received with same good-humoured understanding as an end-of-year kindergarten concert. And, when Knight finally turns to his mic to say, “That was the biggest tune-up for the biggest load of shit you’ll ever hear” and barrels into the first track, everyone cheers. Building your reputation around a philosophy of irreverence pays off when things go awry.

‘Back in Town’ sees the crowd dissolve into an undisciplined circle pit and, for the final song, Knight and beer-bellied guitarist John McKeering play sans shirts. When it’s over, Muller joins them to moon the crowd farewell, proof that age only delivers maturity if you want it to.

As a woman, unadulterated blokiness can be pretty unappealing. But the Cosmic Pyschos’ playfulness surpasses their maleness and, even in their middle age, they seem more like little boys than men.