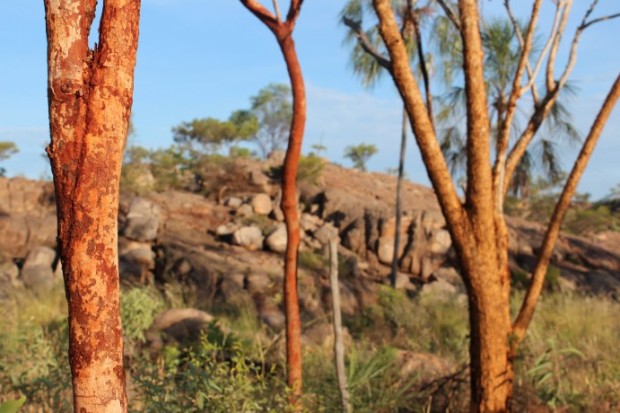 “No. No way! The sign says no swimming.”
“Yes but it doesn’t mention crocs. Just currents.”

“Baby, crocs come in on the currents!”

My partner and I can’t actually see Edith Falls because it’s a brain-meltingly hot hike up an escarpment and we’re arguing in the car park. We’re desperate for a swim but had arrived in Darwin to newspaper headlines bellowing: ‘CROC BREAKS MAN’S FACE’. We’re spooked.

And rightly so. During the wet season in Australia’s ‘top end’, bodies of water overflow and connect, giving saltwater crocodiles a free ride into previously predator-free swimming holes. At the season’s end, croc trappers re-locate them and declare waterholes safe again. Some waterholes are safe year-round, however, and I’d heard Edith Falls, in Nitmiluk (Katherine Gorge) National Park, was one of them.

But nature doesn’t always play by the rules up here. It’s Boxing Day, well into the wet season bracket of November to April, and I’d expected bucketing afternoon rains, deafening waterfalls and gloriously sodden wetlands. Instead, the region is still in the sweat-soaked grasp of ‘the build up’: that famed few months before the wet, when heat is rivaled only by humidity, dark clouds rumble but rarely unlock rain, locals ‘go troppo’, and tourists’ grand plans of sightseeing dissolve into puddles of sweat and apathy.

We had spent yesterday in Litchfield National Park, which is blessed with the (croc-free) burbling cascade of Buley’s Rockhole and the (croc-free) plunge pool of Florence Falls. Swimming through Florence Falls’ cool, tannin-stained water, all sound subsumed by twin waterfalls pounding down, had been immeasurably peaceful.

Peace we know would elude us now if we braved a dip in Edith Falls. Regretfully, we return to the car.

“You said it was OK!” accuses my partner.
“It was supposed to be!” I reply.

Five minutes later, cooled by the car air-con, we manage a laugh at our predicament. Touring the NT involves lots of driving but time spent with the air-con cranked doesn’t feel wasted during the build up. It feels like a way to stave off ‘mango madness’ (the other name for ‘going troppo’).

Of Katherine municipality’s 24,000 people, around 60 per cent identify as Indigenous. The town’s population of 10,000 swells at festive times when many people arrive from remote communities like Ngukurr, Wugularr or Lajamanu to attend community festivals.

But disappointingly, Katherine Gorge – or Nitmiluk to the Jawoyn people who own the park – was closed to swimming just yesterday. “They smashed the record this year,” says the guide on our afternoon cruise. “Eighteen salties were caught in the catchment area – it’s usually eight.”

Nitmiluk was carved by Bolung, the rainbow serpent, he tells us. He points out pandanus plants for weaving, freshwater mangrove for poisoning fish and a sea eagle circling above, “taking away the spirit of the deceased”. Later, he says, “If you’ve got rocks in your head, the sandstone cliffs here are about 70m high,” before relaying Nitmiluk’s geographical facts.

I’m impressed. That he leads with a creation story – and how the land is still used by its people – speaks volumes for his respect of the Jawoyn custodians. I grew up hearing Dreamtime stories but most people on this boat are foreigners.  Tours like this are one step, however small, towards deepening their awe of Australia’s first peoples.

Returning on foot to the Nitmiluk campground, we see purple clouds curdling above, flashing with lightning. Storm! We hurry to the Visitor’s Centre, buy an overpriced ice block, and wait for the show. But no rain arrives. The pattern continues during our travels. All signs point to a downpour – but usually none comes, or there’s just a few fat drops. I learn to mistrust my body’s barometer.

The Jawoyn recognise five seasons, with one season, called Guran, reserved for approximately the month of December when it’s “very hot and humid, large cloud build up is common and rains begin to fall”. I’m struck by how accurately it describes the weather compared to the broad brush-stroke that whitefellas call ‘the build up’. Jawoyn seasons don’t begin on a set date. Instead, they use calendar plants to indicate timings. When the Kapok plant flowers, for example, it’s a signal that freshwater crocodiles will soon lay their eggs in the sandy riverbanks.

We doze indoors through peak heat. Our sleep patterns have changed. We’ve also learnt the difference between ‘first light’ and ‘sun up’: about one hour that we maximise the next morning hiking to Nitmiluk’s Southern Rockhole.

The air is fresh and wallabies are still nibbling on shoots. At 6.45am, the top rim of the red cliff blazes into light. Sun up! We hasten, loop over an escarpment, and scramble down a rocky path to the tranquil, waterfall-fed rockhole. Most tourists prefer the proximity of the campground swimming pool, meaning fish, frogs and turtles are our only company. It’s another glorious swim.

The famed Yellow Water Billabong cruise awaits us that evening at Kakadu. Australia’s largest national park is jointly managed by its traditional owners, (collectively known as ‘Bininj’), and the Australian Government. Surrounded by fluorescent green floodplains, the billabong is a picture-perfect wetlands image, but a furious wave of activity distracts us from horizon gazing. As a live croc chomps on a dead croc, a couple of Brolgas spear through the air, and a popping, chopping noise rises from the water. “That’s the barramundi feeding,” says our guide.

The fierce drama of life here is staggering. The billabong is bursting with territorial salties, massive sting rays, five types of aquatic snakes, a prawn “as thick as your wrist”, five-metre swordfish and sharks. Kakadu also boasts one-third of Australia’s bird population, including the elegant Jabiru, stalking through the reeds ahead.

“As a whitefella, there’s things I can’t tell you because I’m not initiated,” says our guide the next day. Dave is showing us Kakadu’s wet season attractions by 4WD and on foot, and takes his role communicating traditional knowledge with extraordinary care. Unlike white Australian culture, where information is ubiquitous, Aboriginal culture has internal hierarchies of who knows what; a structure that dictates how knowledge is retained, passed down and, sadly, lost.

“Whitefellas have explored less than 2 per cent of this rock country,” Dave says. “There are places I’m desperate to see, but I can’t yet. I can’t ask either. I tried that and things got really serious. Some local fellas sat me down and said: ‘You can’t ask. If it happens, you’ll be taken’.”

We hike 3km to the monsoon forest pools of Gubara. The area is known as Buladjang, or ‘sickness country’, and has rock art depicting people with swollen joints, presumably from the uranium in the earth. Uranium remains a topical issue in Kakadu due to the ever-present threat that mining companies will expand their operations. Last year, however, traditional owner Jeffrey Lee won a battle to incorporate a 1200ha parcel of uranium-rich land – earmarked for mining – into park borders.

Rock art in Kakudu of Nabulwinjbulwinj. Local women do not look at this art as he’s a spirit known to eat females after striking them with a yam. Credit: Kate Hennessy

Before we reach Gubara, Dave takes us on a special detour. The night before, a friend and traditional owner told him about some ‘undiscovered’ rock art. “Everything tourists see – the art, the falls, the sacred sites, the billabongs – are multiplied thousands of times over in Kakadu,” he says, brimming with awe. And just five minutes off the track, there it is. A wallaby painted on a rock overhang, clear as day. Looking at it, captivated, I realise why the local people keep information like this close. Why would they hand us every last key to their ancient sites and secrets?

The rock art in the top end is astonishing, none more so than that depicting megafauna. In 2010, a painting of an emu-like bird was found in Arnhem Land. Known as Genyornis to scientists, the bird became extinct 40,000 to 50,000 years ago, meaning the art could be the world’s oldest, pre-dating the previous record holder, found in a cave in southern France, by around 7000 years.

Those who know Kakadu intimately will tell you to visit multiple times, to see it in all its seasons. I know I’ll be back. When I come, I hope to admire waterfalls during the wet and travel roads that re-open during the dry but I’ll also be returning to hear more of these incredible stories and hopefully meet some a Jawoyn guide and hear from the land, first-hand.

Get There
Daily flights to Darwin operate from all mainland Australian capital cities. Or enjoy an epic train journey from Adelaide aboard The Ghan. www.greatsouthernrail.com.au

Stay There
Just opened in March 2013, the luxury Cicada Lodge is nestled on the banks of the Katherine River. www.cicadalodge.com.au