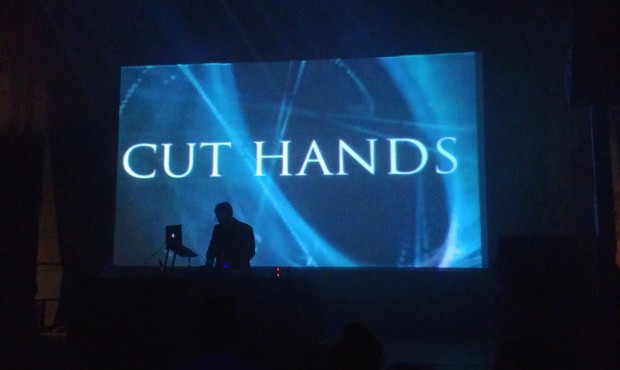 William Bennett’s bold and permissive set as Cut Hands doesn’t quite manage to get the room dancing but it shakes things out and loosens things up and sets bodies free of brains to move without thought. Though clearly Bennett reckons we still need a prod. He’s busier than us – all we’re doing is perving on the naked Bond girl-esque silhouettes dancing sexily on the screen – but he spares a moment to give us a demo on how it’s done. Like this (a twirl) or like this (gyrates with hands behind head) take it away guys! But everyone just cheers at him instead. Bennett’s set moves into the percussive over-stimulus of the Afro Noise cuts (though I swear he’s snuck in an off-continent sample of those tiny Turkish finger cymbals). The screens flare with African booties, boobs and lots of cool-looking voodoo stuff chopped up and strobed at us in increasingly feverish flashes. Some of his drums sound massive – and by that, I mean literally massive bass drums – and I end up in the bleachers, eyes closed, imagining what taut-skinned beauties you could never smuggle through Australian customs are mashed up in his mix. Femi Kuti’s in town. I wonder what he’d think of all this?
One friend puts James Ferraro’s set as such: “He opened up his suitcase / There was blue fog / Everyone stood around for a while.” Another, later, says: “It was crisp pop music that’s wilted on prolonged exposure to the internet’s variegated stimuli.”