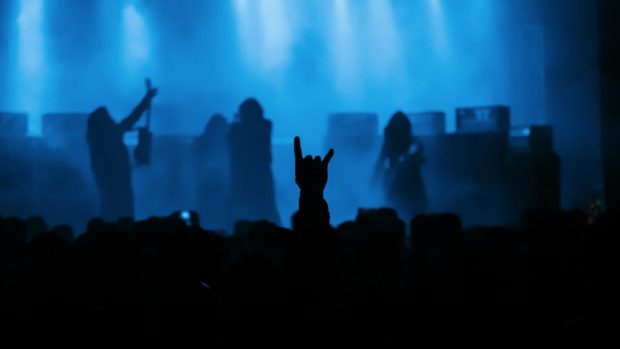 There was a Red Death masquerade, a nude solstice swim, chanting in churches at midnight and a feast with meat on spits and fires in barrels. But the cold, dark and deathly themes of Hobart’s second Dark Mofo contradicted a festival spirit brightened by cheerful visitors, the warm embrace of locals and several sparkling days.

Which is not to say Dark Mofo doesn’t have its rayless moments. I arrive in Hobart for the musical finale weekend at The Odeon Theatre, where the threat of Sunn 0)))’s drum-free yet deafening doom metal sees earplugs resembling chicken Twisties thrust persuasively at us on entry.

But first to Tasmanian act Veil of Darkness, or rather Russell Menzies, who also performs as Striborg and Sin Nanna. With a microphone hovering in front of a speaker calling forth feedback that howls like the Great Lord Tengri and, later, using tools small in size but vast in effect, Veil of Darkness produces a great crackling, clanging soundscape anchored by thuds that swallow his demonic growls. The instrumental country-doom of Seattle band Earth seems clean and kind in comparison. The crowd sways to songs as slow and serious as an Entmoot, as guitarist Dylan Carlson meanders us through languorous solos and drummer Adrienne Davies lands her sticks with the grace of a bellydancer’s snake arms. Conjuring visions of the baked desert plains and a thin shimmering highway, Earth’s is American road trip music.

Also hailing from Seattle, Sunn 0))) use smoke, low light, repetition and the pulverising volume of distorted guitar to create an environment of disorientation. Soon the experience fragments into a choose-your-own-adventure because you could only communicate with your friends via a mime act no-one is in the mood for.

For two hours, four barely discernible figures cloaked in robes and smoke stand among a Stonehenge semi-circle of amplifiers as the air in the Odeon thickens and thunders with nuclear-powered noise. As Attila Csihar unleashes his vocal marvels – throat singing, gurgling, creaking, shrieking, gasping but mainly droning – earplugs are pushed in deep, and I retreat to a seat high up to sink into the mind, body and spirit massage.

The following night is an all-Australian line-up at the Odeon Theatre called Afterlife. Initially, I doubt the line-up’s order. Why put Brisbane’s Heinz Riegler on at 7pm to perform a piece designed to lull us to sleep? Turns out, Riegler’s infinitely gentle construction – its loveliest passage played with an ebow on guitar – does induce a sleepy calm but what better to be roused by than the sensual, dreamy dub of Melbourne’s HTRK?

Over on the small stage Peter Escott announces: “We’re presented by Jim Jarmusch. Jim isn’t actually here but we’re his muse.” Escott is the fey and cross-dressed singer of Hobart duo Native Cats and is taking a justifiable jab at Dark Mofo’s ‘David Lynch presents Chrysta Bell’ show where Bell is described as Lynch’s “latest muse”.

Turns out Escott’s lyrics are as funny and cutting as his quips (“I’m running out of people to never see again”) which – combined with wickedly good basslines, a drum machine, a melodica and a handheld device that looks like my old Donkey Kong game – makes you wonder why any band would bother with more. The answer is in the spectacle of vocalist and guitarist Kirin J Callinan, also one for fabulous costumes; also one who previously kept things simple. In Hobart, Callinan is backed by a full band that help him recreate his 2013 record Embracism with all its industrial sheen intact. It’s impressive, yes, and Callinan is larger than life but his previous solo shows were charged with a risk that has evaporated with the band format.

Back at the small stage pretty girls are ugly-dancing for the clean-yet-dirty synth mayhem of NUN. Singer Jenny Branagan leads by example, delivering lines like “When you rise up / Is when I’ll size you up”. Barefoot, hair everywhere; totally in the moment. After, she crawls beneath the table on which four men labour over synths and drum machines and just sits for a while swigging a beer. I owe her a high-five for that. Last up is Melbourne’s Total Control, who hurtle from the post-punk of their records into a spirit of pure punk live.

You could see most of these acts if you dwelled a month or so in Melbourne, which isn’t to say Dark Mofo’s creative director Leigh Carmichael made bad choices; these are some of Australia’s most exciting bands right now.

But for the moment that perfectly represents Dark Mofo I return to Menzies’ Veil of Darkness when, in a hooded cloak with painted black eyes, he holds aloft a small skull for about ten minutes. Was it evil? Irony? Jest? Plain old getting into the spirit of things? Or just bang on brand?