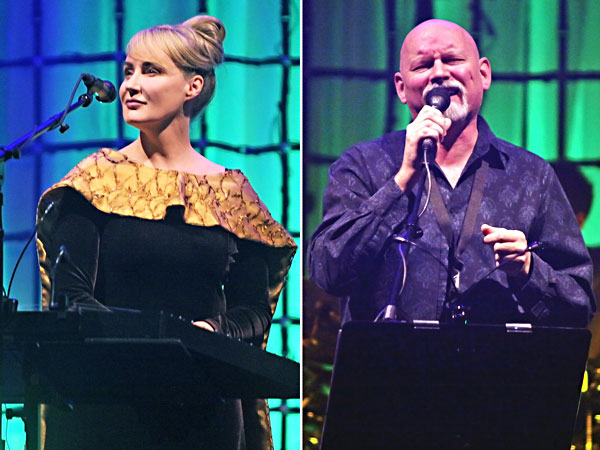 Dead Can Dance (The Opera House)

From all directions toward the Opera House steps, distinct from the perambulating tourists, come a stream of people wearing black. Closer to the steps the darks begin to outnumber the brights. It looks like a pilgrimage.

For many, it is. A couple of years after Brendan Perry and Lisa Gerrard met at a little band happening in Melbourne, they decided Dead Can Dance had no future in Australia. “The Australian music scene was … middle-of-the-road FM hard rock and the alternative scene that did exist was too small,” Perry has said. In ’82, DCD played a farewell concert at Melbourne’s Crystal Ballroom, moved to London and did not return.

Until now. The Concert Hall foyer is filling for the sold-out show. Aging goths and guys in 4AD tees drain flutes of champagne alongside opera lovers – drawn to Gerrard’s unparalleled voice – and world-music fanatics who’ve long appreciated the duo’s virtuosic dedication to mining centuries-old musical traditions from the Middle East, Africa, Greece, China and Haiti (to name a few).

There are also fans like me who don’t worship at the altar of any DCD classification but nonetheless reserve a space for them that’s roped off to all else. The gothic older sister of a school friend introduced me to Into the Labyrinth when I was 16. I evangelised it widely that year. It wasn’t easy to bring my metal-leaning milieu around to music with rain shakers and hand drums, but I had a trick. I’d turn off the lights, light some candles and play the first track, ‘Yulunga (Spirit Dance)’, very loudly. That would usually seal the deal. I was surprised to discover DCD were Australian. Disillusioned, too. The suggestion they were any nationality anchored them to place and time, notional concepts their music soared past.

2012 was an exciting year for card-carrying DCD fans. There had been no new record since 1996’s Spiritchaser until – in what felt fast and flurried given the dormancy preceding it – the band released an excellent comeback record, Anastasis, followed by news of a world tour.

It’s a sense of catharsis that grips me when the symphonic string effects of Anastasis’s first track, ‘Children of the Sun’, begin and Perry’s commanding voice – purpose-built for his elemental sagacity – booms out. “We are ancient, as ancient as the sun/We came from the ocean, once our ancestral home/So that one day, we could all return/To our birthright, the great celestial dome.” On record, DCD can fill a house with spirit. Live, they’re boundless. Their sound is immense.

An ocean of eyes swivel to Gerrard. It’s time. Regal in a gown draped by a sparking white stole, her blonde hair swept into a bun, she stands with more composure than any performer I’ve seen. When she starts to sing ‘Anabasis’, I understand why. There’s a quiver of shock before the air is seized by stillness, a bracing, as though securing a mooring point to withstand the surge of her glossolalia. Primitive yet impossibly pure, it’s difficult to fathom where her sounds originate and impossible to know where they might take you.

Thus it progresses, just as DCD records do: a song sung by Perry, a song sung by Gerrard, occasionally a song sung together; their strengths exchanged in the rhythm we’ve internalised from years of listening to the records. They play with two percussionists (one on an electronic kit to replicate the vast foreboding drums on ‘Kiko’ and myriad other percussive atmospheres), two synth players and a bass guitarist. Gerrard also plays the Chinese hammered dulcimer, or yangqin, while Perry regularly switches to hand drums and the bouzouki.

And the songs? All eight tracks from Anastasis along with favourites from Spiritchaser (‘Nierika’), Into the Labyrinth (‘The Ubiquitous Mr. Lovegrove’), The Serpent’s Egg (‘The Host of Seraphim’) and Towards the Within (‘Rakim’ and ‘Sanvean’). Perry also sings a song from Andalusian Spain. “It’s an old song,” he explains. “About 800 years old, in fact. It’s about unrequited love and wanting to be free of it.” It’s a Moorish song but he ends with an ululating cry that rivals the best traditional Flamenco ballads, steeped as they are in darkness and betrayal.

It’s a carefully considered set list that’s deeply satisfying for those here. Amplified in DCD’s live performance is their mastery of pacing and portent: their songs unfold slowly and sensually. And to state it again: Gerrard’s voice, live, is a revelation. It’s many times richer than on record yet the impression – from brief moments when it condenses into almost impossible potency – is that we’re glimpsing only slivers of what she’s capable of. In impact, I’m reminded only of Diamanda Galás but with none of the demons Galás unvaults.

DCD’s second encore delivers a surprise. As Perry sings “On the floating shipless oceans,” people turn to beam at their companions in recognition of ‘Song to the Siren’, a Tim Buckley song transfigured into a classic by This Mortal Coil. Perry’s version has little of Elizabeth Fraser’s fey lyricism and places a too-heavy hand on the balladry for my taste. But it really doesn’t matter. It might not equal This Mortal Coil’s version (could anyone’s?) but it’s a homage that’s all about right place, right time, right crowd.

Dead Can Dance left 16 years between albums. In that time not one act sprung up to emulate them. None tried; none could.