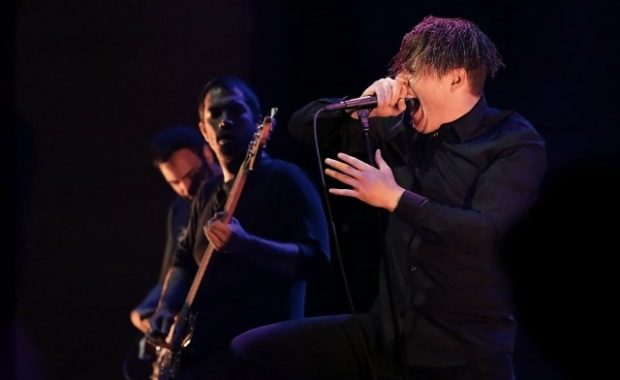 Six years on, I barely recall the performances. Gear and crew and a shitstorm of human labour, that’s what I remember. A stage in constant changeover because the bands played so briefly. Dollies and trollies. Men and women in black – darting, ducking and scurrying; feverishly seeking crosses etched in masking tape on the floor; legs scissoring beneath towering stacks of amplifiers that were carried on and off.

The crew’s toil was the show. Sound was hauled into noise before our eyes via an armory of machines. You could have called it performance art if it hadn’t been so obvious that the night’s overlord was a hellish tech specs spreadsheet. We squirmed in our seats. 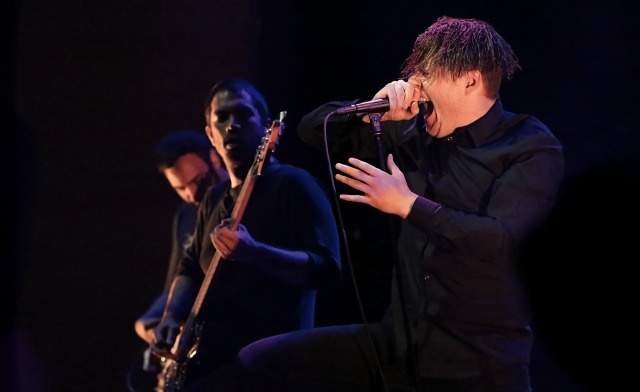 People had been surprised when the line-up was announced, though. Productive conversations were had. We wondered if the Opera House would suit local experimentalist Lucas Abela as he scraped screeching glass across his bleeding face. The curation was a talking point.

How times have changed. In 2016 it is standard practice for mainstream festivals to sprinkle fringe-dwellers among the crowd-pleasers and room-fillers. Niche scenes are cultural corners to be excavated, cud twice-chewed. So when Californian metal band Deafheaven is programmed for Vivid, it is surprising only momentarily. It is more surprising to discover Deafheaven is the first metal band to play the Opera House since the noise night. Were employees as traumatised by the foray into extreme music as onlookers had been?

When Deafheaven released their second record, Sunbather, in 2013, the world was waiting for them. People fell hard for their amalgam of black metal, hardcore, shoe-gaze, post-rock and thrash. Pitchfork gave Sunbather ‘Best New Music’ and a unanimous wave of raves got it ranked by Metacritic as 2013’s best-reviewed album: “the first time a metal album has occupied the #1 slot”.

Amid the critical fuss developed a fan fuss about their authenticity as a black metal band, centered on if Deafheaven (then the songwriting duo of singer George Clarke and guitarist Kelly McCoy) might actually just be two San Francisco hipsters faking it. Faced with all the fusses, in the two years between Sunbather and Deafheaven’s (even better) third record, New Bermuda, singer/screamer George Clarke became markedly more withdrawn in interviews.

Who can blame him? The only snippet of internet trivia I need is this from Wikipedia. “McCoy met future bandmate George Clarke in 9th grade, after he complimented Clarke’s Slayer t-shirt”. That moment says it all. It is tender and true. The rest? Bin it.

Tonight is a 7.30pm show. No support act. In with us and out with us like the early elderly sitting at a popular new restaurant. Deafheaven begin with “Brought To The Water” – the first song on New Bermuda – then play the record’s remaining four songs in order. No frills, no flab, no overthinking it. No fiddling with amps, no guitars swaps and not a roadie in sight.

The sound is dense, immense and immaculate – I am pinned to my seat by its force. I greet the confrontation like an old friend as it resolves into the bliss of being able to enjoy extreme metal mixed so expertly. Even though we are all sitting down, there is no frustration or awkwardness. Everyone is moving their heads and a sense of overwhelmed joy floods the room.

The guitarists are unexpressive so we watch Clarke. You may think it is his opening salute that mesmerises you – marching in his buttoned-up blacks to the front of the stage, fist on chest, fist in air (the salute that’s seen him accused of appropriating Nazi tropes) but it’s not. You may think it’s how he uses his hands to conduct – seemingly caught in a fiction of summoning the sound himself – but it’s not that either. Sometimes he thrashes his head and during the introspective post-rock parts, he prowls, cat-like, front of stage.

It’s none of this. He is mesmerising not as a frontman but as someone who moves inside the music – most obvious when he conducts parts that aren’t even playing yet. In the disorientation delivered by the more intense moments of their songs – and it is intense – you slip inside his head too. Hear it as he hears it and feel the pride of birthing songs so monstrously beautiful into the world. And as on record, his Nazgul shrieks act as a third instrument, inducing a kind of unwavering dread with no relief to it.

Their disappearance for the encore is low bullshit too. They walk off, we cheer, they walk back on. “If you know this one stay on your feet,” says Clarke. The thunderous monolith that is “Sunbather” hits us in the chest and no-one sits again. They close with “Dreamhouse”. Opera House, dreamhouse, tonight it is the same thing.