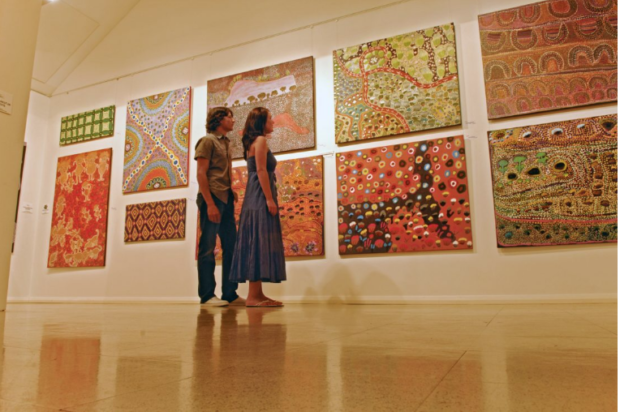 First held in 1990 at Araluen Arts Centre in Alice Springs, Desert Mob is the oldest of Australia’s thriving annual program of Aboriginal art fairs. With its 30th anniversary coming up in September 2020, Kate Hennessy looks back on Desert Mob 2019.

The first thing to know about Desert Mob is that the artists wholly select the works exhibited. The second thing is those artists come from what Araluen curator Stephen Williamson describes as “a sizeable chunk of the country’s centre.”

Each year, in tandem with Desart (the peak body for Central Australian Aboriginal arts and crafts centres), Desert Mob presents the work of some 30 art centres from a region of around two million square kilometres, three states and numerous Aboriginal nations. Their remoteness is unfathomable for urban Australians. Alice Springs, by contrast, is a bustling metropolis. “You couldn’t visit all of these art centres, or at least not easily,” says Williamson. “Darwin Art Fair, Cairns, Tarnanthi in Adelaide – they all have their precursors in Desert Mob. If you want to see the art of NPY lands [Ngaanyatjarra Pitjantjatjara Yankunytjatjara] and meet the artists, it’s the best way to do it.”

On a visit to Araluen in 2017, I’d seen its wonderful archives of Albert Namatjira and Vincent Namatjira works. But the part that really sank its hooks in me was the 300-year-old Corkwood tree. When it was built in the early 1980s, Araluen was planned around the tree, as well as an adjoining hill, because both were (and are) sacred to the Arrente and Lupitja people.

I loved how the lore of the Corkwood tree was boss here, and its rights, in as much as they meshed with the cultural beliefs of the traditional owners, were upheld. There are many other preserved sacred sites in Australia, I know. But you can see this magnificent ancestor tree while browsing tea-towels in Araluen’s gift-store, anchoring the earth here to its history, and still making nectar for the honey-eaters.

When I arrive at Desert Mob on opening day, a dozen art collectors are queued up to enter. “I’ve been here since 6am,” says the man in front, Arthur Roe, a private collector from Melbourne. Discarded newspapers pile up at his feet. “I’ve been doing this for 25 years,” he says. “It’s not just about sticking something on a wall.”

It’s four in the afternoon and the doors don’t open until six. But Araluen has just released the catalogue and Roe has discovered he and another collector want the same painting. I ask which one. “I’m not telling you,” he says.

I blunder into several such taboos over a three-day program encompassing an exhibition, a symposium and a marketplace. On seeing my media lanyard, Coby Edgar, assistant curator of Aboriginal and Torres Strait Islander Art at the Art Gallery of New South Wales, clams up entirely. “I can’t say anything,” she says. “Nothing. It’s seen as swaying the market.” While no-one knows exactly what the market for contemporary Aboriginal art is worth, in their 2018 Report on the impact of inauthentic art and craft in the style of First Nations people The Australian government last year estimated it to be “many millions of dollars”. The movement was born four hours from here, in the early 1970s in Papunya, when men began painting designs onto boards that had traditionally only been seen on earth and flesh.

Nearly half a century on, it is still Indigenous art which claims Australia’s unique spot in the international art world. Last year, for example, the New York solo show of Wynne Prize-winning artist, Yukultji Napangati, a Papunya Tula artist, caught the eye of musicians Jay-Z and Beyoncé, who bought two paintings.

Roe’s competition is collectors Biddy and Chris van Aanholt. They give Roe their blessing, however, to purchase the painting by Pepai Jangala Carroll of muted blues and greys. “I’ve often bought the pick of the show,” says Biddy, who comes every year. “There’s not what I call ‘the mighty white lens’ here because it’s the artists who decide what’s shown.”

The artists have time to bask in the glory before the throngs arrive. Hubert Pareroultja is a senior artist from the Hermannsburg watercolour school who, as a child, would watch Albert Namatjira paint. Like many of the older men here, he wears an Akubra with a silver-embellished band and poses by his painting, radiating pride.

More than 70% of the work this year is by women. They move swiftly through the gallery, long skirts swaying, looking first at the names, keenly interested in the achievements of their peers. “It’s an event that drives innovation,” says Williamson. “With so many of the artists coming, it’s an immersive epicentre where they’re all seeing each other’s work and being influenced and driven by it.” Representatives from major arts institutions are here too. I hear one trying to relay the gist of an artwork by phone. “Burnt colours, sort of a spiral. Look, it’s pretty amazing.” The Central Australian Aboriginal women’s choir gathers outside to sing Hallelujah and other sacred music in Pitjantjatjara and Western Arrarnta language, the latter described as “one of the most complex languages on the planet” by filmmaker Naina Sen. Later, the choir is led by Hermannsburg potter, Judith Inkamala, into the gallery for a photo. Spontaneously, the women sing again, the strength of their intertwined voices stilling the room.

At the Indigenous-run symposium, the stories on canvas go multi-dimensional as we hear directly from their creators. From Tennant Creek, a place described by Warumungu man Jimmy Frank Junior as “taking the full force of colonisation,” we hear about tapes recorded by an anthropologist in 1966 of elders telling dramatic Dreamtime stories. Now repatriated to their Warumungu descendants, those voices from the past are inspiring artworks with eerie names such as Grandmother Made of Stone.

Whoops and whistles break out for the Arrwekwetye Mob fashion show. Created by women living in town camps in Alice Springs, the collection premiered in August at Darwin Aboriginal art fair as part of its ‘From Country to Couture’ show. While the patterns mirror the women’s bold expressionist art, the artists explain that the long and flowing shapes were inspired by what many Indigenous women already wear.

Senior Kuninjku artist, John Mawurndjul AM, shows archival photos of his life up Maningrida way in Arnhem Land. Mawurndjul’s work had a major retrospective at Sydney’s Museum of Contemporary Art last year, I am the old and the new. He’s on-stage with his grand-daughter, speaking in language with translations by his collaborator and linguistic anthropologist, Murray Garde. The presentation is relaxed and funny; the photographs fascinating.

I arrive just four minutes late to Saturday’s marketplace yet already the gravel is a blinding carpet of canvases being spread, flipped and assessed by buyers who seem to have sprouted extra arms for the job. Everything is priced at $500 or less. “Calm down honey,” a man says to his wife. Spouses are sent a few metres off to hold canvasses vertical. “It’s too bright, we need earthier tones,” a woman yells.

For art centres such as Martumili in Western Australia, which is 2565 kilometres from here down some bone-jarringly bumpy roads, the marketplace is like a Boxing Day stocktake sale. Many of the artists here are extraordinarily productive so more room, and more funds, are always needed.

When I’m barged by a coolamon near a stall advertising “heavily discounted wood artefacts,” I retreat to the recesses of the Minyma Kutjara Arts booth. Here, Noreen Parker’s art is on the lids of 44-gallon drums. Parker isn’t here. She’s busy with a side hustle selling bush tobacco, but arts centre employees say she paints the Maralinga nuclear test story. “She tells the story of Emu Field – the first explosion – from her mother,” they say. “From the wilchas, their little houses, they saw this huge light, which they thought was a storm or the Rainbow Serpent.

I catch up with Roe too. Deal done, he has gone from cagey to candid. I ask how fast he found Carroll’s painting when the doors opened. “I nearly pulled a hammie!” he says.