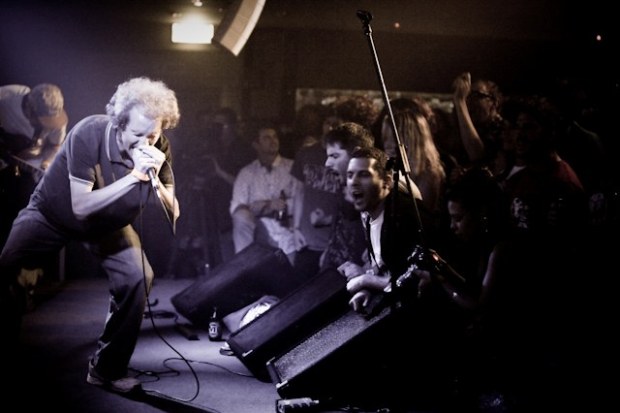 It’s a neat summary of why it feels so good to be walking down Enmore Road on Sunday with a handful of “this people” friends. There are no “that people” to contend with; none of that jarring clash of devotees to different scenes and sounds that music festivals commonly elicit. It imbues the day with the same sense of camaraderie that makes many metal festivals so unexpectedly feel-good. As he continues his message, however, Faulkner loses his thread. The reason each band made the bill, he says, was because they were the “Grade A Good Stuff” – a subjective claim that cheapens the curatorial strength of a festival that features “now” bands (like Royal Headache) alongside “then” bands (like The Sonics) as a way to showcase the thriving continuum of garage rock n’ roll.

I miss the show but piece it together from three comments repeated by everyone who sees it.
“They all took their T-shirts off at the same time!”
“They were doing their metal thing.”
“They were fucking loud.”

“Thanks for getting up early to come see us,” says Straight Arrows singer Owen Penglis. It’s 1.30pm. Wry smiles all round. The Arrows blister into ‘Haunted Out’ from debut album It’s Happening and have the crowd warmed up in five seconds flat. Their lo-fi sloppy surf-rock functions like a medicinal shot of tequila. Makes you feel a bit charged, a bit messy, a bit free.

Snug in the dark recesses of Notes, hand wrapped happily around my “breakfast” beer, I watch a group of middle-aged folk seat-bop to the shouty adolescent sneer and stomp of ‘Bad Temper’: “Get so mad, get so mad/Fuck you Mum. Fuck you Dad/Bad, bad, bad, bad temper!” I wonder if these mums and dads still think rebellion is cool? Or at some undetermined point did they switch to thinking it was sorta silly? Or does snotty rock’n’roll appeal to a demarcated zone of snotty adolescence preserved well into our antiquity? The response to Straight Arrows makes you place bets on the latter.

“You can all pretty much go home now,” says Pengilis when it’s over. “You’ve seen the best of the best.” He’s probably joking but I’m glad he said it anyway. The day is enough of a pageant to the past without the ankle-biter bands heaping praise on bands that no longer need it.

Already, those playing at Notes are competing for attention with the bigger acts due to two large screens onstage playing live footage from The Enmore. Watching the Straight Arrows do their darnedest to distract us from The Hard-Ons playing behind them, I’m reminded of a quote by ex-Strangler Hugh Cornwall. “I can’t imagine what it’s like being a young person trying to get a start in the music business – it must be a nightmare,” he said. “Because none of the old fuckers like myself are giving up”.

The Fleshtones sprint from the wings to their spots onstage in a display that’s athletic shorthand for “We’ve still got it man!” But with Straight Arrows’ hooks still jangling in my head, I can’t latch on. And compared to Notes the Enmore’s sound is echo and mud. “The Tones” are in black pants and bold-coloured shirts, grinning like maniacs with limbs akimbo, all high kicks and synchronised spins. Two songs in and the guitarist is soloing on a human pyramid built from the thighs of the bass player and singer. It’s pure showbiz yet oddly infantalising. I feel like I’m watching The Wiggles. We bail (leaving hundreds lapping it up by the ladleful) and commiserate out the front with some other refugees from the great Fleshtones pantomime. “Want a one-line review?” offers a friend. “Less camp on vinyl.”

Did The Sly Fox get the Dig it Up! memo? They don’t appear to be on board with the festival at all. The stage lights are murky while harsh white down-lights illuminate the meager audience here to see the band. As The Gooch Palms come onstage the screen behind them powers down into screensaver mode and the dreaded DVD icon begins richocheting from corner to corner of the screen. It’s the 21st century’s key signifier of “I can’t be fucked getting off the couch”. Meanwhile, the crowd is still thin on the ground. I flip through my program and start to feel uncool for being here in the first place.

The Gooch Palms duo of Leroy and Kat are like the grown-up versions of the naughty kids with the hippy parents who never told them to behave. Kat sings and beats a couple of drums (sans cymbals) while Leroy sings and plays dubious guitar. “This is a song about hay!” announces Kat proudly, doing a good imitation of unsalvageably unhinged. “You know, the kind horses eat?!”

Leroy chimes in. “It’s time to introduce you to the third member of The Gooch Palms and a very special guest,” he says, ceremonially, before turning and mooning the crowd. To further make his point, he reaches around and delicately separates his ass cheeks. Nevertheless, more people swarm in and, as they do, a curious things occurs. The gig gets better. A couple of the Straight Arrows guys shuffle to the front and prod, elbow and otherwise cajole their friends to join them. Suddenly, the room has energy. Because it’s packed, more people try to pack in.

The Gooch Palms get more raucous, the crowd laughs louder and everyone moves more. The lead singer belts out an Elvis-like croon that’s pretty darn electrifying, followed by some doo-wop falsetto and an Axl Rose screech. Guy’s got talent! They blaze into some sort of crappy yet catchy-as-hell ‘Blitzkrieg Bop’/Ozzy Osbourne mash-up and the momentum of the moment breaks over the room, leaving me stranded on a bone-dry island some distance behind. Nevertheless, it’s captivating. I feel like I’m witnessing the genesis of an “it” band at accelerated speed and ferocity – from near-empty room to hipsters swinging from the chandeliers. Hell, my friends only bailed five minutes before I did and the suckers missed EVERYTHING.

There’s few inroads to Belles Will Ring when it comes to the written word. Theirs is such a well-crafted amalgam of ’60s and ’70s influences– from Electric Prunes to The Mamas & The Papas – that it almost sounds like they imagined up the whole trip themselves. But it’s so tastefully delivered to a note and to a gesture that it makes the experience wonderful to partake of but difficult to report on. Perfect circles always are.

Percussionist, keyboardist, flutist and co-vocalist Lauren Crew is especially alluring today when juxtaposed against the backdrop of aged Sunnyboys. With a notable lack of women on the bill, the belle of the Belles copes with a roomful of lascivious eyes with her signature blank stare. “She’s a real snake-charmer,” says a friend in admiration. It’s true. Her moves are hypnotic. Her tambourine is firm and precise. Her stare is cool. Her voice is warm. They wrap up with ‘The River’: the soundtrack to a drug-addled spaghetti western, dumping you on your acid-fried ass deep in the desert badlands with just coyotes and cacti for company. Scorching on record, elevated to incendiary as a set-closer and the only time you hear vocalist Liam Judson really lose his lolly.

Barreling from side-to-side like an enraged, fuzzy-headed crab, Royal Headache frontman Shogun is the show. It’s impossible to overstate the impact of his voice and his furious delivery and how it elevates the band’s otherwise standard three-chord pop-rock to something worth witnessing … again and again. The band functions much like Shogun’s unruly limbs which don’t always do his bidding. A few seconds into ‘Down The Lane’ he hissy-fits centre stage.

AC: Geez, that Shogun fella is a fairly grumpy sort, isn’t he? He seems extremely uncomfortable as he paces the stage, making gruff demands to the soundie to change the foldback levels, and to the band themselves about what songs to play or what speed to play them at. (To be fair, he was right on that last point, making them stop during the first verse of ‘Down the Lane’ and rev it up by about 10 BPM.) Most of the best tracks from their debut LP are played, like ‘Never Again’, ‘Really in Love’ and ‘Psychotic Episode’, and they end on a furiously agreeable cover of ’80s pop-standard ‘Teardrops’ by Womack & Womack.

A rising ratio of meatheads in the audience doesn’t help. Guys are barging through the front section with tinnies, front-on, instead of sidling sideways as gig etiquette dictates. By sheer force of will, however, I enjoy the majestic ‘Godbless’ from Doughboy Hollow as much as the next DP devotee; a track that’s all the richer for the many here who wept over the Sunnyboys’ reportedly glorious set a few hours earlier: “So here I am, alone with you/The Sunnyboys, God bless them/And God bless you.”

In the Green Room Lounge, Laughing Outlaw label owner Stuart Coupe is interviewing Steve Wynn (Dream Syndicate), Brad Shepherd (Hoodoo Gurus) and The Fleshtones singer Peter Zaremba. It’s an interesting chat full of frank and colourful details. Rock is eating itself, however. Coupe asks his “panel” about playing with Died Pretty back in the day. They all nod sagely and begin talking about a legendary gig at Paddington RSL. No one mentions that Died Pretty – the real Died Pretty that is, not the one resurrected from collective memory – is bashing it out as they speak, a few doors down.