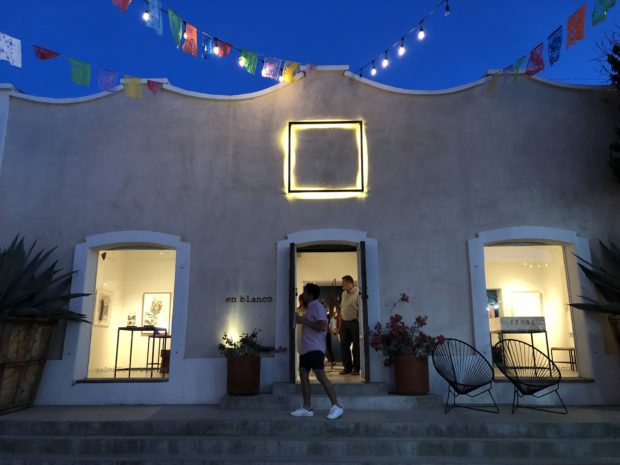 Ditch the party for arty

First published in the Australian, October 2019

On the arid southern tip of Mexico’s Baja peninsula, in a municipality called Los Cabos, the towns of San Jose and San Lucas are separated by 30 minutes in a car and very different ways to holiday. “Do you want to relax or party?” says my driver, Luis. “You mean go to clubs?” I ask. “Yes,” he says. “San Lucas has very many.” So many, that it’s a magnet for students on college break to party their pesos away in swim-up bars, or at famous nightclubs such as Cabo Wabo, opened by Sammy Hagar of Van Halen.

About two million vacationers fly to Los Cabos from the United States each week. On disembarking, they’re quick to flick the ‘on’ switch. The airport helps, planting a mariachi band and dancers between the bag carousels and the exit, while outside, at a bar by the pick-up zone, men in loud shirts crack open Coronas in the dry desert heat. So much for freshening up back at the hotel.

Rather than compete with its boisterous sibling, Los Cabos’s smaller city of San Jose has developed into a high-end art district. Its backstreets are low on banging clubs but high on galleries; a concentration of art that is showcased every Thursday night between November to June at the town’s art walk event.

From 5pm, the streets are closed to cars so pedestrians can zig-zag freely across the cobblestones from gallery to gallery where they’re offered wine, mezcal and a yarn with the artists. I visit in April when the nights are cool and the Sea of Cortez breeze flutters the ropes of coloured flags draped between the streetlights. While I wait for gallerist Patricia Mendoza to join me, her daughter, Carlotta, brings a duo de chiles margarita (jalepeno and serrano). “We slow cook the chillies, it’s our specialty,” Carlotta says. She is effortlessly stylish in a tailored white shirt and orange perspex sunglasses that don’t look good on just anyone. You don’t imagine Carlotta would have left uber-hip Mexico City unless San Jose was a place to be, too, a theory she emphatically confirms.

The art in Patricia Mendoza’s gallery is diverse in style but united by a very Mexican heart-on-sleeve intensity. One of her most esteemed artists, Luis Filcer, passed away, aged 91, last year. “One of the last true expressionists in Mexico,” Mendoza murmurs, sadly. Dedication drips from her and judging by how warmly she’s greeted everywhere we go, including a kind of parting of the sea at a jammed Italian restaurant, it’s returned in kind.

Ramble long enough in San Jose and you’ll find everything from the exquisite beaded sculptures of the Huichol people of the Sierra Madre mountains, to textiles, fine silver jewellry and artist Enrique Bascon’s portraits of Mexican revolutionaries such as Pancho Villa and Emiliano Zapata. Bascon came here from Bilbao, Spain, 15 years ago, and never left.

Minimalist landscape painter Leah Porter has a similar story. She opened Casa Dahlia gallery in 2006 after coming from Oregon to “the bright Baja sunshine” to do a painting sabbatical. “The raw landscape and incredible light … was a great inspiration,” she says. “Then it happened, I fell in love with a historic adobe house with original green doors and shutters and I moved here that year.” The work that takes my breath away, however, is far from contemporary. It’s the Mata Ortiz pottery in La Sacristia gallery, painted with brushes made from human hair. In the 1950s and ‘60s, as the archaeological site of Paquimé was being excavated in Chihuahua, the impoverished residents of neighbouring town, Mata Ortiz, began to recreate the pottery being dug up on their doorstep.

Their recreation of this ancient style found an ardent market and exhibition space in places such as the Smithsonian and the Vatican, with sales lifting the town from poverty. You don’t learn that in a swim-up bar.