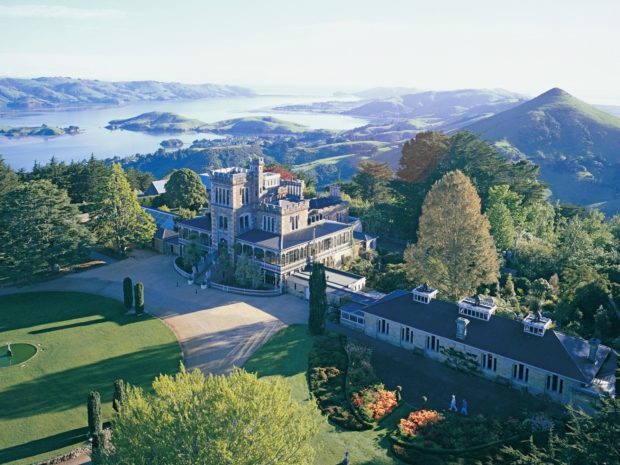 First published in The Australian, August 2019 Both rail and scenery enthusiasts will delight in the half-day train ride from Dunedin through Taieri Gorge to Pukerangi, and back again. This is no slick, Wi-Fi-enabled affair. Think scones, a locomotive lurch that has you waddling down the aisles, and on-board commentary full of “dad jokes”. But oh, the views. Horse studs, pine forests, ferny thickets and the sheer flinty sides of Taieri Gorge. Ten tunnels and a series of high, narrow bridges make the journey a tad teetering, but the brisk air at the remote Pukerangi turnaround will sort you out. The Taieri River is said to be brimming with brown trout, but without road access for anglers most live to a ripe old age; railnewzealand.com.

Nothing of note has been added to or taken from Dunedin’s finest home, Olveston House, since the early 1900s. In 1966, the Theomin family’s last member, Dorothy, died with no children, and the house became a one-of-a-kind museum. It was built by knighted English architect Ernest George for David Theomin back when Dunedin was New Zealand’s wealthiest city. Theomin was mad for mod-cons such as electricity (Dunedin still ran on gas) as well as furnishings from all over the world. On a judicious guided tour, you’ll see 18 rooms, snap-frozen in the era’s splendour. Fetishists of all kinds will find something to swoon over: a Chinese rug, Samurai swords, Wedgwood crockery, crystal, art, textiles, pianos and a billiard table. It’s all meticulously documented in the visitor’s centre; olveston.co.nz. Bruce Mahalski makes striking — and amusing — artworks from bones, fossils, skulls and entire skeletons. So it could be said that the most identifiable bone showcased in his Dunedin Museum of Natural Mystery is New Zealand’s funny bone. On display here is a humour darker even than the wit we’re known for in Australia. Mahalski was an only child of scientist parents and spent a lot of time alone collecting things from the natural world. For a $NZ5 ($4.80) entry fee, you can browse his clever array of bone art and poke around the other paraphernalia: quirky artefacts and leathery old books with titles such as The Intimate Sex Lives of Famous People. Kids can take a selfie with antler horns; royaldunedinmuseum.com.

In a chilly paddock about 30 minutes’ drive from Dunedin, guests of Horizon Tours’ Southern Stargazing experience recline on chairs, wrapped in blankets with hot soup on demand, and wait to be immersed in Maori creation myths about the night sky. This newish family-run venture is stargazing by name but a deep dive into Maori astronomy by nature. And when born storyteller Kylie Ruwhiu-Karawana launches into the waiata (songs), your goosebumps won’t be caused by the cold. A 200x magnification telescope is on hand but plenty of celestial magnificence can be seen with the naked eye. Wildlife is a bonus, with sea lions and wading birds nearby in Hooper’s Inlet; horizontours.co.nz.

Dunedin’s three breweries can be split into age groups. Speights is the blokey great grandpa, 141 years old, and offering 90-minute tours and tastings. New New New Corporation is the ambitious upstart, striving for sustainability, eager to flip the script on the brewing scene. Located in a warehouse, it caters to a younger crowd with club lights amid the fermentation tanks and experimental craft beers on tap (sours, ales and pilsners mainly). Emersons, meanwhile, is the middle-aged crowdpleaser with a Bird Dog IPA that doesn’t come cheap but was the best beer I tasted. Its restaurant and bar, Taproom, serves fresh fish, warming pub grub and is family friendly.

About 15km from Dunedin’s CBD, Port Chalmers is a bit of a Jekyll and Hyde. Between October and April, you’ll likely find a small harbour crammed with cruise passengers on shore leave. At other times, it’s an ideal spot for coffee and cake (Union Co), local art (Pea Sea Art), an afternoon drink (historic Carey’s Bay Hotel) or a dig for vintage clothes (Box of Birds). Rents have always been cheaper in “Port” so it’s a long-time muso and artist hub. For a men-at-work experience, watch the port buzz or head to the Port Chalmers Maritime Museum in the old stone post office.

Nothing can prepare you for seeing a royal albatross chick nestled on a windswept hill sloping down to the Pacific Ocean, but the Royal Albatross Centre tries anyway. Before you hike up to see the chicks, this conservation-led centre shows a video of trivia about the majestic birds. The chicks are huge balls of white fluff; one male chick here tipped 13kg. I see an adult albatross on the wing too, silhouetted against the moody Otago sunset. At eight months, the chicks bolt down the cliff for their maiden flight. They don’t land again for five years but when they do, it’s right back here. The centre is the only mainland breeding colony of royal albatross in the world; albatross.org.nz.

For a little city, there is an inordinate number of great coffee joints in Dunedin (a cappuccino at Mazagran made my heart palpitate, if that’s your thing). The food can be patchy, though, so guidance is needed. In the beach suburb of St Clair you can watch locals surf a break that’s thrillingly close to shore and have breakfast, lunch or dinner at Italian restaurant The Esplanade. It fills up on weekends but with such a breezy atmosphere, beach views and delightful Otago wine to sip at the bar, time slips by. Its pizza-pasta menu is simple and satisfying, and lingering for a digestif afterwards is all too easy; esplanade.co.

“Tourists assume,” says my Larnach Castle guide, “they should do Olveston House or Larnach Castle but they should do both.” New Zealand’s only castle was built in 1874 on a ridge with 360 degree views of the Otago Peninsula. Tragedy struck when patriarch William Larnach took his life in Parliament House in 1898 and the castle left family hands. Shell-shocked soldiers recovered here during World War I, and in the 1920s a new owner, the first of several, began restoring it to its former glory. It’s been privately owned by the Barker family since 1967. The drive from Dunedin is dangerously pretty and the traditional high tea in the ballroom cafe is fun. I enjoyed channelling my inner Jane Austen heroine on a stroll around the 3ha garden; larnachcastle.co.nz.

Quite by accident, I put new boutique hotel The Chamberson to the test. My flight arrives at morning peak hour instead of cocktail hour the night before (as scheduled) and I’m desperate for a pre-lunch nap. The hotel is downtown but the double-glazed windows are first class. The renovation of this 110-year-old warehouse features the requisite splashes of exposed brick. Of its 21 guestrooms, 10 are compact Attic chambers, which make perfect “crash pads”. My Nest category room (pictured) is more spacious, with a kitchen, comfortable lounge and high-quality furnishings. The best bit? There is none of the forced design quirks so common to boutique hotels now. From $160 a night; thechamberson.co.nz.

Kate Hennessy was a guest of Dunedin NZ.