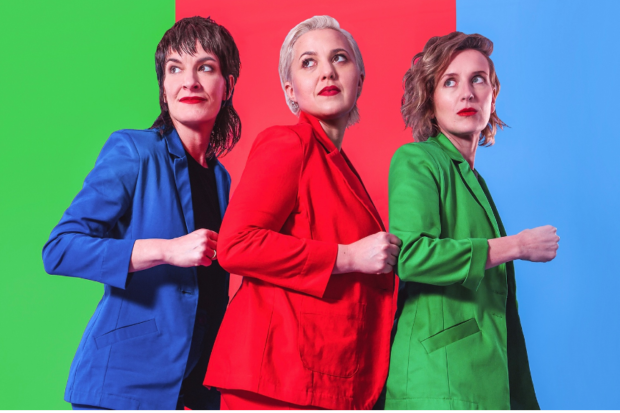 The rush of emotion takes you by surprise before even a note has been played. They each strap on a guitar and swivel to face the room square on in a classic rock choreography that’s a little bit My Morning Jacket and a lot Crosby, Stills & Nash.

Once In A Lifetime by Talking Heads is cranked but it’s not the same as it ever was. Something old is new again: they’re all women.

Later, Cloher milks it a little. “We’d like to introduce our band, Dave Williams on drums,” she says. No-one else is needed given Cloher plays rhythm guitar, Dyson plays lead and Stringer covers most bass guitar duties.

The self-titled album, recorded at Wilco’s Chicago studio, is freshly released but shows in some states have sold out. Since the trio’s national tour in 2013 they’ve released six solo records between them, plus all those that came before.

So while the single Falling Clouds is in homage to the “underrated, overlooked” female Australian rock musicians who “kicked the door wide open” for them in the 90s, Dyson, Stringer and Cloher are nudging legend status now, too.

You assume the show’s highlights will be lines such as “Nothing against Paul or Nick, but if you want to be remembered then you better have a dick”. But it’s the less wry moments that quench the soul as the trio harmonise to summon a spirit that is far more than the sum of their individual parts.

When they sing “rise up” and “shine on” on Young Girl, it’s as if they’re beaming a surplus of self-belief our way. You feel genuinely lifted up, too, when they channel Pat Benetar and Patti Smith on the heart-on-sleeve big rock of Believer.

The wheels get wobbly when an early start on the music downstairs threatens to tank their a capella version of Can I Borrow Your Eyes. Yet jackets discarded, lights down, arms around each other’s bare shoulders, they bring our focus back to their intertwined voices – “and let love take me” – through sheer force of will until not a dry eye is left.