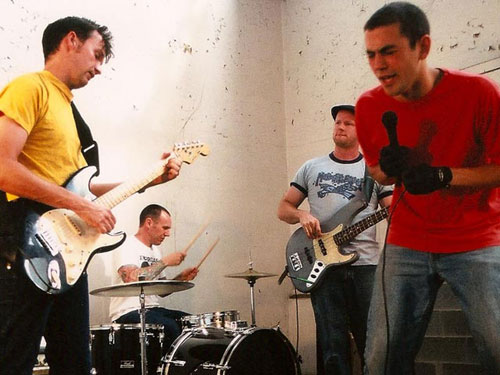 The first time I lost a shoe in a moshpit was in the summer of 2002. Reverend Horton Heat, Great American Music Hall, San Francisco. The second time was at Eddy Current Suppression Ring on Friday night.

Losing a shoe to a pit is one of life’s nobler milestones. It’s an act of character. It also generally means the band is really fucking good. On Friday night, I lost it at about 1.32am. The crowd shouts along as they pass singer Brendan Suppression across the tops of their heads. Bass player Brad Barry plunks away two rows deep in the crowd, lying flat on his back, eyes closed and smiling, not missing a note by a nanosecond, but oblivious to a likely head-stomping. With singer near the ceiling and bass player on the floor, guitarist Mikey Young (aka Eddy Current) sweats it out from the relative comfort of the stage, tearing through chord progressions with scowling discipline.

It’s hard not to get into the rough energy of Eddy Current Suppression Ring when the band members set such a fine example.

But next thing I know, my red clog is gone. Through the euphoria of tequila shots and Extra Dry chasers, panic descends. They’re playing ‘Insufficient Funds’ at thrash-metal speed and people are flinging themselves everywhere. I squint around but can’t see it anywhere.

I start to compute the distance to the door, thinking I’ll sneak off unnoticed and cab it home. I figure I’ll ditch the other shoe in the melee and go barefoot for consistency. First, I bend down, reach “in” and miraculously, it’s there. Oh, the relief! I figure it’s time for a breather and squeeze myself a few damp rows back.

“Insufficient funds! And I’m having fun!”

La Campana ‘Spanish Restaurant and Latin Nightclub’ was a small and unlikely venue for ECSR, recently nominated for an Australian Music Prize worth $30,000 and in Sydney for just one night. Their two-piece “swamp-tech” support act from Louisiana, Quintron & Miss Pussycat, carry a fair buzz too, following a NZ and Australian tour including a gig at Golden Plains.

We arrived at about 10.30pm after a Facebook missive that day informed us of the late start.

In the restaurant/nightclub at the front of the venue, a hens’ night is segueing shrilly from dinner table to dance floor.

Green laser beams and school dance disco lights bounce sharply around the room. We hustle past the hens into the gig room up the back, spying Brad Barry (stage name Rob Solid) watching a game of footy on TV just outside the entry.

Since Quintron & Miss Pussycat are nowhere to be seen, I join him for some footy action and discover ECSR have gone upmarket on this trip to Sydney.

“Our drummer’s girlfriend’s sister lives in a one-bedroom apartment in Darling Harbour, so usually we all just stay on the floor there,” he says. Not this time though. Since the band have sufficient funds, they decide to splash out on a hotel.

11pm, still no New Orleans swamp-tech, but we decide to head in anyway. “I don’t want to miss the puppet show,” says Brad/Rob. Apparently he’s the only one in ECSR who hasn’t seen Quintron & Miss Pussycat play. “The other guys say they’re awesome,” he assures me.

Said puppet show is perplexing, to say the least, and Quintron doesn’t hit the stage until the silly side of midnight. But swamp-tech turns out to be a whole lotta fun. Quintron & Miss Pussycat have clearly attracted a crowd all of their own, who are seriously, seriously into it.

At one stage, a guy leaps on stage and drops his daks to reveal a red, silky codpiece type-arrangement. He shimmies around a bit. Act over, he leaps back down.

Beloved, be-gloved Brendan starts the show hunched over, sideways to the crowd, rattling off what could best be described as paranoid bogan scat.

It’s an intense start to the set. There’s no recognisable song yet, just the tightest rhythm section in the southern hemisphere, and Brendan’s words finally taking shape: “What are you looking at?” he repeats, or something to that effect, in his idiosyncratic strine.

Friday’s gig was more intense than I’ve seen ECSR before. There’s little of that feel-good vibe some of their songs have on record. Live, they’re more menacing with an undercurrent of aggression. Lyrics that seem kind of flippant on record blast at you with meaning on stage.

If you can bear to take a few songs out to observe, their dynamic is pretty compelling.

He fixates on guitarist Mikey a lot, like he’s seeking affirmation, approval, permission to go on. He’s like the unpredictable little brother to the other three in the band.

He moves jerkily and half lunges at the crowd, then retreats, like he’s harnessed there. You get the feeling his relationship with the fans is kind of complex. He spends much of his time with his back to the audience, but when he does look out at the crowd it’s like he’s turned around to deal with you personally. His gaze is penetrative. It sends shivers.

If you’re seeking a set list, or anything resembling it, you’re not going to find it here. I can’t remember. There was barely pause between songs, they only have two albums, and they played for about an hour and a half. Fill in the gaps yourself.

It’s verging on 2am and it’s washout time. The ECSR boys disappear to their hotel. Quintron smokes a fan’s ciggie out the front.

I wander up to George Street to find a cab and glance down fondly at my once estranged clog. I’m happy we’re re-united now but, like most good separations, I’m glad we spent the time apart too.