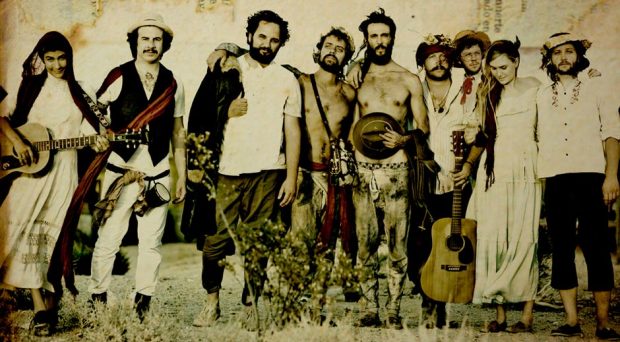 From the Enmore’s upper deck the crowd looks like  a “single colonial animal with a thousand waving pink tentacles” – Tom Wolfe’s description of a Beatles concert in The Electric Kool-Aid Acid Test – as the Los Angeles indie-folk jam band hum, strum, twang, hoot and harmonise their way through 2012 hit ‘Man on Fire’.

Bearded frontman Alex Ebert glides along the front row in a grubby thermal and hobo pants, grasping the crowd’s extended hands with saintly benevolence, as barefoot frontwoman Jade Castrinos sways in a flowing dress, beaming from the inside out. Ebert leaps back onstage to do his cracked-out scarecrow dance all over it, singing: “I want the whole damn world to come dance with me.”

Did I mention it’s the first song?

Excitement peaks early and maintains an ecstatic simmer throughout. There is no set-list, just Ebert stoking a sense of consensus model communion by asking the crowd “So what next?” then acting as impromptu music director, telling the band to “Do the verses stripped, I want the lyrics heard” (‘If I Were Free’) and “Let’s start it acoustically” (‘Give Me A Sign’).

There is no backdrop, no visuals, no proper lights – the stage, in fact, never dims, so the 10-piece band plays in bright nude light, any blunders bleedingly obvious. The homespun production aesthetic is half buzz-kill, half genius move to convince us we’ve stumbled into a for-donation show at the hokey local town hall.

Divorce yourself momentarily from the vibe, however, and you’ll admit the songs sound better on record where the instrumental intricacies can fruitfully coexist alongside the shout-along choruses.

There is also the inconvenient truth that although this big ol’ caravan of enlightenment was gathered by chief songwriter Ebert (Edward Sharpe is the alias for his “perfect self”) it is not his pinched, Lennon-esque voice that incites the crowd’s biggest response. Those roars are delivered to percussionist Christopher Richard who bounces to the front wearing a floppy denim onesie to sing like Curtis Mayfield dialled up to Beck’s falsetto on ‘Debra’.

Though in divorcing yourself from the vibe you’d be pushing against the flock here who seem mind and body invested in surrendering to it, their open-hearted devotion a source of energy that Ebert and Castrinos tap by passing the microphone to the most feverish-looking story-tellers in the front rows. Stories surface of marriage proposals and seminal first concert experiences; we hear from sons of mothers cured of cancer and from dads of daughters ecstatic that Ebert stole their girls’ hearts.

These storytellers don’t care that the summer of love spirituals prompting their confessions aren’t musically novel with the Enmore’s fervour as the band close out with their biggest hit Home (“Home, let me come home / Home is wherever I’m with you”) proving old styles will always draw fresh audiences if they keep the focus on connecting anew.