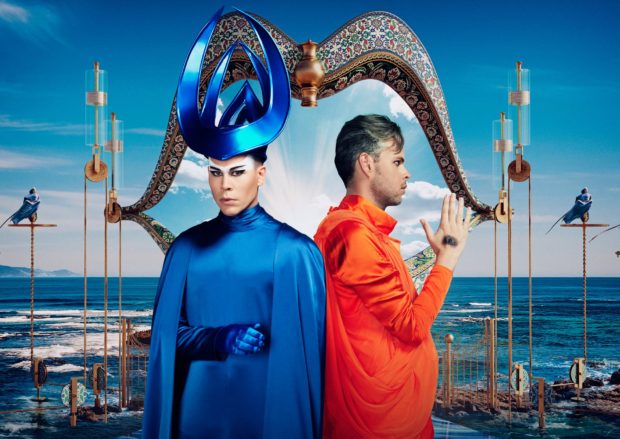 Empire of the Sun on the ad that changed their lives


On YouTube, views of the Honda Civic advertisement first televised in January are ticking towards 200,000. “Song iz awesome,” reads one comment. “Hey what is that song called and who is it by I like that song,” reads another.

A commercially placed song, known as a “sync”, is an increasingly legitimate way for musicians to make a buck in an i ndustry where sources of cold hard cash, at least for artists, is scarcer than ever. The success of the Honda sync was surprising though because the track that so enraptured viewers was Walking on a Dream by Australian pop duo Empire of the Sun, and it is eight years old.

The song’s Shazam tags exploded after the ad’s release, as did its digital downloads and streams. In May, the band re-released Walking on a Dream in the United States and it hit number one on the Billboard dance songs chart. When I speak to Empire of the Sun co-writer and producer Nick Littlemore, on his promotional tour for their new album, Two Vines, the 2008 song has just sold one million copies in the US, qualifying it as platinum.

An impressive album might have been even better had the music been given just a hint of its predecessor’s fanciful imagination, writes Alexis Petridis

“It changed America to us,” says Littlemore. “It was very strange. The radio started playing it because people started requesting it. We’ve been very fortunate … songs don’t often come back around.” He pauses. “I do believe if you put a positive thought into the universe it’ll come back around, a bit like a message in a bottle.”

Littlemore’s hair is silver now but his face is childlike. His manner is calm and open, verging on guileless. Conversation circles pleasantly but persistently back to his favoured topics of nature, hallucinogens, dream states and plant wisdom. You suspect he really does believe his band’s success is the result of happy thoughts in bottles.

“In the States, people thrive on positivity,” he says. “I find it sad that [cynicism] still permeates the culture [in Australia]. I had a bit of that ‘tall poppy’ thing when I was 20, 21. I was expecting some more nasty journalists on this trip and everyone’s been really wonderful, so I think if you’re putting out a positive message, it’s hard for people to call you nasty names.”

Both Littlemore and singer Luke Steele are based in Los Angeles. In December, Steele will don the duo’s outlandish costumes and begin touring. Littlemore won’t be joining him – he never has.

“I don’t want to be away from my wife and my life. I like creating, it’s all I like doing. I know fans will be like, ‘fuck you, you don’t tour, you let us down’ but it was never my intention to tour. It gets messy and all the rest of it.”

Special guests on the record include Henry Hey and Tim Lefebvre from David Bowie’s Blackstar band, Wendy Melvoin from Prince’s Purple Rain-era Revolution band, and Fleetwood Mac guitarist Lindsey Buckingham. “[Fleetwood Mac] has always been a big influence. Lindsey was allegedly a fan, which I still don’t believe, but he came down with his son to the studio and it was very natural and so wonderful.”

How to rectify a lacklustre second album? Make the third blindingly bright. On Two Vines, Empire of the Sun return to the form of their first album, continuing their voyage out to strange new worlds. Visually and conceptually, that is. Musically, it is neither strange nor new: shimmery and trebly with beats that flutter and pulse instead of pound. On some tracks Steele’s voice is robotic with autotune and in photos the duo has retreated even further into airbrushed artificiality.

In the video for High and Low, Littlemore appears momentarily as a many-armed Indian god before the clip segues into a sequence that looks a lot like the Honda ad. “Alice D you’re on your way up,” sings Steele though it sounds like “LSD”. Littlemore, who writes all the lyrics, says his artistic process is “picking out colours from the sky.”

“I’m really happy with the new record,” he says. “I made a concerted effort to bring it closer to the first record, to turn the drums down and the music up. The second album for me was a little paper-thin; it didn’t warm my soul in the way moments on the first do. I wanted to focus on harmony, melody and a message.”

That message is about nature. “Welcome to the garden of unearthly bliss,” opens the press release. “Through the waterfall of dreams, beyond the white light of the ice curtain lies a lush, green world where childlike innocence and ancient wisdom are one. Enter, Empyrean pilgrims”.

It was fans who named themselves “Empyrean pilgrims”, Littlemore clarifies. As for the rest of the delusional high drama – such as appointing Steele ‘Emperor’ and Littlemore ‘Prophet’ – he says it was “initially a reaction against the ‘stare at my shoes’ generation”. Then it gathered steam.

“We thought it’s not for us to decide what a 12- or 13-year-old kid will like. We’re going to build something worthy of their imagination and dreams. While we might look quite ridiculous when we dress up, [imagination has no limits] for your 10-year-old self. We were very excited by the prospect of being on that kid’s bedroom wall.”

But how does Littlemore reconcile a message about nature with songs created using studio technology? “To capture something that’s purely natural or naturalistic is not necessarily possible with Empire,” he admits. “Inevitably, with a band that gets successful and finds its place … there comes a pressure about a repeat performance and this sort of thing. I just like to take the opportunity to talk about things I actually want to talk about rather than, like, our new costumes. I really just want to talk about nature.”