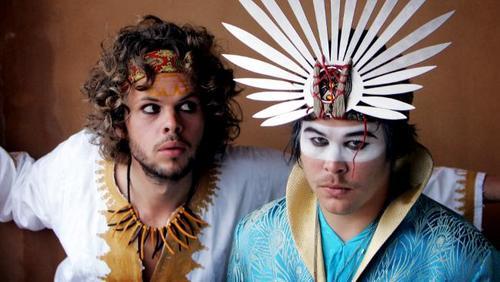 Empire of The Sun (The Opera House)

Whenever Empire of the Sun’s first single ‘Walking On A Dream’ fades out, I want it to keep playing forever. It’s all pleasure and no guilt, the mark of a great pop song.

In the six years since the electronic duo’s debut record, I’ve been entertained, rather than irritated (like many), by singer Luke Steele’s self-appointed role as Emperor, and impressed by how he and cohort Nick Littlemore have spun their delusions of grandeur into the show itself. It seemed … fun.

While I’d shy at describing their ethereal dance-pop as that of “visionary music pioneers” – as the Vivid website does – I arrive at the Opera House for the launch of their second record, ˆce on the Dune, with a reservoir full of happy expectation. Steele has promised a lavish show and, as we know from their videos, outlandish costumes are guaranteed.

Raised onto the stage, fist in the air, Steele begins the evening silhouetted like a statue of a victorious Communist dictator. His drummer wears brassy gold Viking horns, his bassist wears brassy gold Aladdin pants and dancers writhe around wearing the first in a series of shimmering bodysuits and perplexing headpieces.

All the elements are in place – costumes, lights, dancers, visuals, tall shiny hats and a shiny treble-sharpened sound. And for a while, I accidentally think I’m having a good time. Until I begin wondering why the dancers are wearing tutus around their necks. And my feet start to ache (Steele had directed us to stand).

Sore feet and a wandering mind? The sheen is wearing off. By mid-way though ‘Standing on the Shore’, however, I feel like I’m doing just that, as a cruise ship presents that evening’s onboard entertainment, all choreographed charm and razzle and dazzle, while I curl my toes uncomfortably in the sand.

By directing us to stand so early in the show, Steele deprives us of our chance to rise of our own accord, spontaneously. While standing works for the familiar songs from Walking on a Dream, which are charaterised by an airy ‘80s feelgood vibe, it’s fatiguing for the new songs, which have less acoustic warmth and no-one can sing along to yet.

Usually mercifully dark, the Concert Hall is twilight-lit for the hour due to the light spilling from the stage – fabulous for the spotlight-craving extroverts; not so fabulous for the many left folding their arms awkwardly, trying to mask outward signs of buzzkill.

If sitting had been an option, those preferring it might have better appreciated Steele’s ability to actually inhabit a silly costume, rather than look like a grown-up playing dress-ups. We might have laughed on realising the only reason he goes sans Emperor’s hat during ‘Tiger By My Side’ is so he can tear off his guitar and trash it at the end.  We might even have risked closing our eyes during ‘Walking on a Dream’ to enjoy how the chorus lifts it like a bed sheet plucked from the middle, the verses draping gracefully down around the glow at its centre.

The pressure to stand and marvel at the opulence represents a larger problem with tonight’s show. Each physical gesture, like Steele’s over-choreographed power chords, comes with an implicit instruction on how we should receive it. There’s no room to fashion our own interpretation, or, gasp, to dislike it. It feels stifling, like being told to put your hands in the air at a hip-hop show when you really don’t want to.

And though Steele hits every note perfectly, alternating the iron-steady vocal strength he used to such great effect in his erstwhile rock band The Sleepy Jackson, with that floaty, blissy falsetto, lest we forget that Emperors who like controlling the masses can topple into despots.