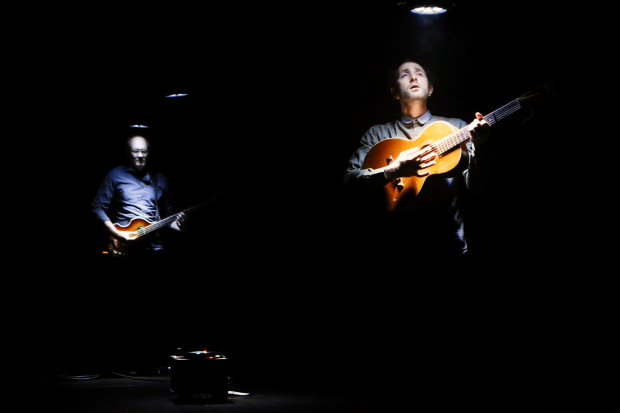 First published in The Guardian It was a premiere and the first night of a new year for Sydney festival, but Tamara Saulwick’s Endings tapped the old things: folk songs, storytelling, analogue technology and death.

To light the duo’s way as they crouch to place needles on vinyl are low lights, swinging as pendulums, marking time’s slip. Occasionally, Mann emerges from the darkness to sing and strum a guitar. Better known as Grand Salvo, the Melbourne songwriter is responsible for six albums of unparalleled, critically cherished folk.

His 2008 album was called Death and both releases since, including 2012’s Slay Me In My Sleep, have ruminated on the subject. I’d hazard no Australian singer writes more tenderly of death’s place in life’s cycle than Mann and this collaboration on Endings seems more inevitable than serendipitous, yielding some of the show’s most bittersweet motifs: “a note that never ends, a line that never bends.”

Saulwick selected ordinary people to tell stories of death – what is, ostensibly, an ordinary event. There is no drama, intentional poetry or even much raw grief perceviable. Even so, her production translates those tales into extraordinary storytelling, marked not by sadness but awe.

A woman tells us that in the moment a loved one died she looked, involuntarily, to the ceiling. “I thought he’s going, he’s gone.” Another talks of her father being “a strong man” with “a soft need” for her to stay with him. Tears blur the stage; the theatre’s blackness a blessing.

And Saulwick doesn’t rely solely on second-hand stories. The death of her own father, Irving, is a thread she unravels throughout. He comes to her from the afterlife through the services of a psychic who Saulwick, in turn, channels, her face turned baldly to the light, alive with pain and its trancendence.

Running at just an hour, Endings is an elegant, economical production that delivers on its promise to stay with you long after you leave. Its subject matter is difficult by default and impossible to hear without grafting onto it your own fears and faces. But it is uplifting too, and comforting, offering a sense that death is an experience shared with the living, even if only momentarily.