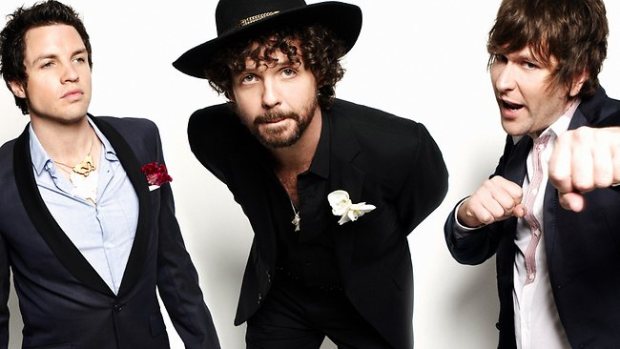 Early in the set, Eskimo Joe’s frontman Kavyen Temperley points out that with Homebake cancelled, tonight is the band’s only Sydney show this year. “We’ll have to make the most of it and say ‘That gig in 2013 was f**king incredible!’”

But Eskimo Joe’s limited-edition Sydney presence, launching their sixth record Wastelands, does not transform them into a rare or exciting thing. Tonight’s show is instead awash in the familiar, with the exchange between band and crowd like that of a comfortably married couple. After 16 years of togetherness, the ‘Eskies’ and their fans sure know how to make it work.

It begins with communication. Temperley and guitarist Stuart MacLeod easily charm the crowd, which responds by laughing largely at only-moderately-funny jokes, participating in a clap-along for new falsetto-heavy song ‘What You Want’, and occasionally bellowing “We love you Eskies!”

Showing your love theatrically gives marriage a healthy boost too. Guitarist Joel Quartermain contributes by racing to the drum riser to rock out high up, while Temperley dedicates ‘Losing My Mind’ to a fan called Bec.
g skeleton suit.

The problem, of course, with all these gestures is that live music should take you somewhere, anywhere, that is unchartered, and this show does not. Fortunately however, even as the third wheel in tonight’s union, I am roped into its most important maxim – never go to bed cranky with your partner – when Eskimo Joe finally impress me with ‘Sad Song’ from Wastelands, its mid-section new wave drift almost carrying me along with it.