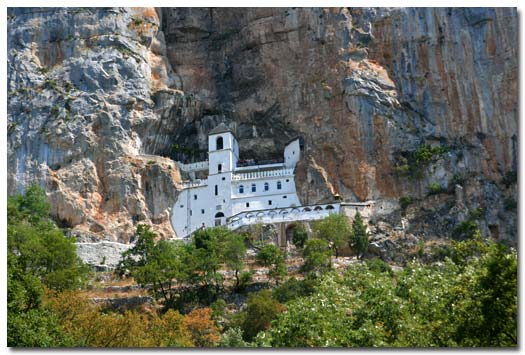 First published on my blog, October 2008

At Ostrog Monastary last night I ate a grape from a vine at Upper Cave Church. Prior to trekking up, I’d heard women pilgrimaged here to eat the grapes which are supposed to bring fertility. On seeing the vine, I nearly believed it. If ever there were a magic grapevine, this was it.

Ostrog is a major Balkan pilgrimage site in Montenegro because of St Basil. Things got interesting after the (already very good, very devout) Basil died in 1671. His body had not decomposed after eight days and a grapevine began to grow above Upper Cave Church, at far too high an altitude. People with various maladies began to miraculously heal. Apparently St Basil’s body remains under a shroud in Lower Cave Church.

It’s real hike to get here. First, a half-hour car trip up a zig zag road, ascending the mountain to reach the monastery accommodation. From there, a 20 minute steep uphill walk through a wooded path.

Ostrog is staggering. The cliff, its austerity, the cold bare rooms, the pilgrims, the monks. After the ostentatious parade of churches and cathedrals through Europe, visiting a monastery is like looking faith straight in the eye. There’s no stainglass, mosaic or flying buttresses to appreciate in a purely secular sense. I am even less comfortable in the company of ascetics – with no material symbols of worship to admire,  I genuinely don’t belong here. I’m the bogan at the art gallery.

Serbian Orthodox monks are flitting by mysteriously in brown robes, disappearing through doors that lead deep into the cave. In 2005, it was rumoured that former Bosnian Serb President Radovan Karadzic was hiding here, on the run from a horrific list of war crimes. I don’t think this was ever proved and Karadzic was arrested in Belgrade in 2008.

I escort my heathen heart up the spiral staircase carved into the cave’s stony interior and exit at the first viewing platform. Below, in the dusk, swarms of Bosnian pilgrims (Ostrog is in Montenegro but most of the pilgrims are from neighbouring Bosnia and Hercegovina) approach the entrance. It’s narrow, so they’re forced into single file. They’re in modern, though modest, attire and they’re quiet, serious and determined. You can tell they’re here for a reason and it’s probably a weighty one.

How I wish I spoke the language and had more guts. There they go, filing below me, all those stories I’ll never hear.

“Isn’t this place a knock-out?” he says. Then he points to the vine above us and raises his eyebrows, expectantly.

I’d been so fixated on the pilgrims below, I hadn’t noticed the vine was there, its sparse, gnarled branches weaving through some mesh above us. Surrounded by the stone of the cliff, the vine did indeed looked magical in its improbability.

I look up doubtfully. There’s no way I could reach the vine, it’s too high.

Plus, I’m spooked. The vine genuinely emanates some kind of ancient power. I envisage a scene that’s First Testament-worthy: the skies turning an angry shade of purple, a deafening clap of thunder, and hell opening its fiery maw as I, Eve-esque, pluck fruit from the forbidden tree. Michael interprets my hesitation as a cry for manly action, however, and whips off his sweat-stiffened ball cap and torpedoes it vine-wards. About seven shrivelled, grizzled grapes patter to the ground around my feet.

“Oh!” I drop to my knees and scoop them up. Michael wanders off.

I choose the least grizzled grape and eat it. I don’t have permission but I want to hide the evidence.

It’s leathery and for the most part, tasteless. For a second it imparts a distant and dusty memory of ‘grape’ and then it’s gone. This piece of fruit tastes like the definition of the word barren. So much for fertility. I plunge the rest in my pocket, and wind back down the stairs, hoping I haven’t done anything to provoke the ire of St Basil. If he can heal people he can probably strike them down too.