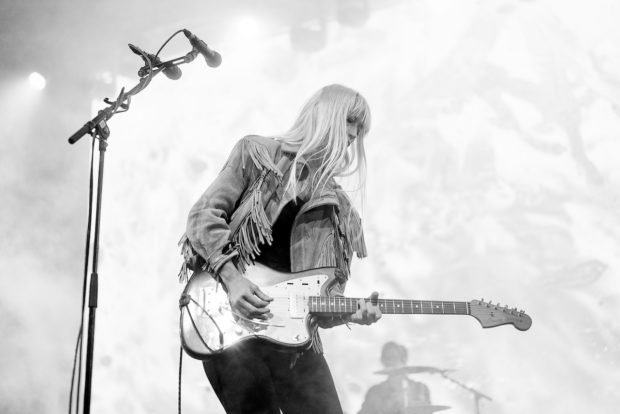 
In August I went to Scandinavia for the first time. I was a guest of Music Norway as part of its international delegate program, showcasing Øyafestivalen.

Øya was started in 1999 by four Oslo residents who ran venues or were involved in Norwegian music. One founder, Claes Olsen, says it started small, with Norwegian acts, on an island (Øya is Norwegian for island). It grew into the country’s biggest festival but didn’t lose its commitment to home-grown acts.

The Norwegian acts were my favourite aspect. Vince Staples will play Sydney again but it’s doubtful I’ll see Stein Torleif Bjella down under. I could look at Stein’s face forever, by the way, which is handy as I don’t know what he’s singing about.

Fifty Norwegian acts played at the festival and at the Øyanatt club sessions (held in central Oslo each night). Here’s who I liked most: Jetlag and pizza, blow and snus A few hours after landing, I find myself with an excellent posse of similarly jetlagged international delegates. But less so, because nothing tops Sydney to Oslo via Singapore and Frankfurt on three flights with two layovers.

We are one each from Sydney, New York, London and L.A. We eat pizza in a bar, drink mojito-like cocktails and enjoy a long, long sunset.

After, we go with our Music Norway hosts to Revolver Bar for a quick shot of ratzeputz. Floral and aniseed-y, it’s 60% alcohol and I’m told I might text every number in my phone afterwards (or worse). It burns like a restless ember in my gut for about half an hour. I like the taste though; .

On to Oslo’s legendary Bla (pronounced, erm, “blow”) club where we see a gender-non-conforming singer take to their acoustic guitar with such aggression they fall off their stool. “I’m feeling jetlagged and kinda hard to surprise,” I confess to a delegate.

“Yeah, that surprised me a little,” he confesses back.

Everywhere, fresh-faced and fair-haired Norwegian women are shoving wads of tobacco called ‘snus’ under their top lips. The wads look like those de-humidifying sachets in vitamin jars that keep the pills fresh. It’d have to be a bigger buzz than snus addicts display for me to shove one up.

Sodden wads of snus litter the ground everywhere Scandinavians party. It’s a very non-invasive vice though which in itself is very Scandinavian. Norwegians especially keep to themselves and the men are laudably non-sleazy. If they do perve, they do it discreetly. Italian men should come here for masterclasses.

And Norway should be proud: it’s a huge perk for solo female travellers. Towards the end of the night, a Music Norway rep turns to me, eyes full of sorrow. “It will be raining tomorrow, a lot of rain and it will not stop.”

It will not stop

She is right. Every time I go downstairs to leave, it’s coming down with such fury, I turn back. I have a $15 raincoat from Bunnings warehouse but, even so, a soaking is inevitable. The hotel staff help me download a radar app (which predicts it will not stop) and assuage my worst fear: my boots will get so wet they’ll be soggy all week.

“We will have old newspapers on the counter when you get back,” they say. “Take those, stuff them in your boots and they’ll be dry by morning.” Good enough for me. I leave at 2pm aiming to see Roy Ayers play ‘Everybody Loves The Sunshine’.

The festival is at a parkgrounds in Tøyen, 15 minutes from the metro station. There are five stages, the big ones with great sightlines due to natural amphitheatres or grassy slopes. There is lots of good vegetarian food, recycling bins and apparently the toilet waste powers the festival transport. It’s all so progressive and Scandinavian! But the rain is relentless. Everything is a battle: the bleary stages, the mud, the moist portaloos, the trying to not care what’s become of my fringe. My plans to zoom around seeing Norwegian acts doesn’t transpire. I take shelter in a food stand and listen to Beth Ditto playing near-by. I manage a snigger when she says: “I’m trying not to wipe off my eyebrows.”

Later, I take refuge in the VIP area where the downpour dimples the surface of a sad swimming pool. I’m jetlagged and nothing feels real.

But at nightfall, after so many years, I get to see Spiritualized. Jason Pierce plays with the Oslo Philharmonic Orchestra (and a gospel choir, natch) and it is perfection. I stand at the front among a quietly transfixed crowd as stars twinkle on a purple backdrop for ‘Stay With Me’ and I nearly die of happiness. It doesn’t matter that the rest has been a wash-out. It’s greed to want any more from a single day. Make it all so fine…

Before bed, I scrub my muddy boots with the bathroom floor towel, which I cast in my shower cubicle. Multiple festival-goers do the same. The cleaning staff must wonder why the people with the blue lanyards haven’t learnt to go in the toilet yet.

After breakfast, we walk through dazzling sun to Olso’s harbour. Everything is rain-washed and sparkling. We take a boat to a fjord island called Bleikøya where there is lunch, swimming and dorky games. I meet a bunch of nice people including Ida from the Stavenger-based band Sassy Kraimspri. The BBQ cutlery is puzzling. It appears to be made from clear resin trapping gritty chunks of golden-brown sand. Everyone is too polite or hungover to ask what the hell is going on. It looks very organic and I should know. While eating a potato salad filled with forest of dill, a prong from my fork snaps off. I munch it for a sometime before I realise my fork is missing a limb.

Back at Øya, I also realise Norwegians do not like standing at the sides for gigs. They form an orderly oblong that extends a very long way back. And I, meanwhile, dislike standing at the back with the talkers, drinkers and drifters. Øya and I are ying and yang! Each show, I start at the side where the crowd is patchy and slide across to the front.

The Norwegian sun just goes and goes. At 6pm it beams down like high noon in Australia. During the warm months, Scandinavians turn their faces like flowers to the sky to soak up every ray. If you did that in Australia you’d have a face like an old leather bag by the time you were drinking age. “In Winter, we’re like ghosts,” I’m told.

At first, the endless day is deliciously disorienting. But by 9pm, this many hours of solid sunshine and so few hat sightings makes me a little queazy. A booker from Manchester tells me: “I put on some sunscreen and two wasps came straight for my nose!” Clearly, sunscreen is a novelty here even for the insects. Stoner doom band Sleep is my gig of the day. I’ve seen them before and I’ll see them again and that’s the point. They do what they do, brilliantly, irrespective of where or when. Being confronted and confounded by music that takes you someplace new is great but so is knowing exactly what you’re gonna get.

Before the gig, two new gig buddies and I map out a plan: do a shot; grab a beer roadie. Pre-roll a few ciggies, hit the VIP portaloos, find a spot for the band. We are in place 15 minutes later and when Sleep play ‘Dragonaut’, life is simple and sweet. If yesterday reminded me why big festivals can be a bloody hard slog, today reminds me why I still love them.

Yet no weed smoke wafts by. This is unprecedented for a Sleep gig and in any case, I was relying on a contact high. Norwegians have strict drug laws – they also control the sale of alcohol, like the Swedes – so I guess they’re used to doing stoner doom without the stoned part.

It’s a tough call but my favourite thing about Øyafestivalen is the beer-cup hoovering children. Today, I people-watch. So many sharp blue eyes and perfect noses. So many blondes! Squint your eyes towards a densely-packed crowd and it looks like a unravelling jute rug.

It’s magical here at night. You can see the city twinkle but smell freshly-turned earth. We walk back to the hotel. Everything is close in Oslo. This is a good because taxis – OK, everything – is crazily expensive here, especially when you’re converting to $AUD.

The last day of Øya is a blur. Four days trekking from the same hotel to the same park will do that. I still haven’t fathomed where to find a coffee with milk but I’m an espresso drinker by now.

On Saturday I arrive early to see the balls-out garage rock of Olso’s Wet Dreams. Everyone says their other band, Death By Unga Bunga, is even better.

Nils Bech presents the queerest live show I’ve ever seen – half music, half contemporary dance – in tandem with the most delectable hunk of Nordic man flesh you could ever hope to see; a dancer who pirouettes around the stage enrapturing everyone with eyes.

My highlight is Jenny Hval. She isn’t an Øya discovery and she’d top any list I made – Norwegian or otherwise – but it is a thrill to see her on Oslo home turf, singing in English, bantering in Norwegian. Her show is woozy, prowling, mesmerising live art. Someone types in “true Norwegian black metal” to a search engine and she plays to the results; scrolling, gruesomely, behind her. I am so glad she is here, doing what she’s doing. (I interviewed Hval after Øya for this Vice/Noisey piece)

Thankyou to Music Norway for having me!

All photos of Norwegian acts below care of Øyafestivalen. 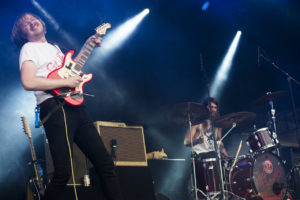 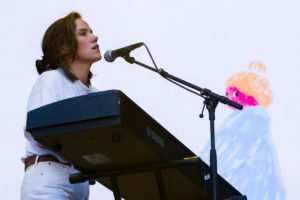 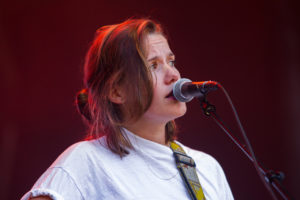 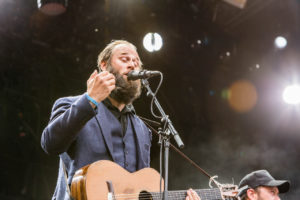 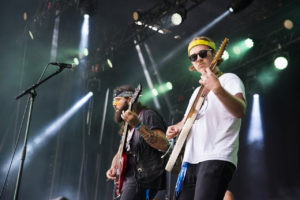 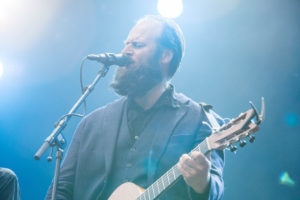 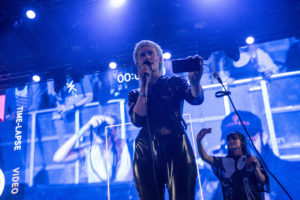 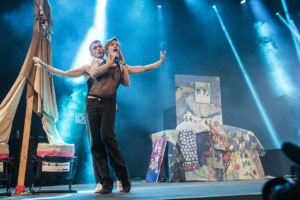 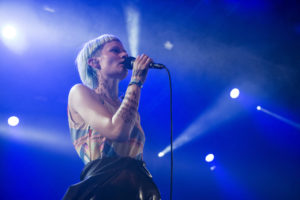 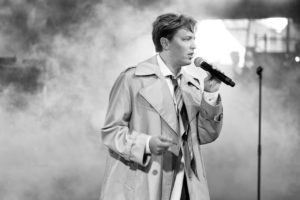 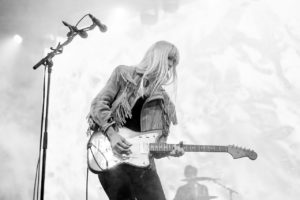