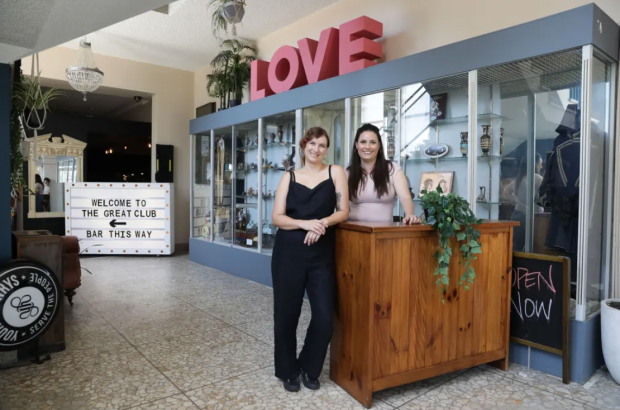 From gentlemen’s club to bar run by ‘lady tycoons’: welcome to Sydney’s the Great Club 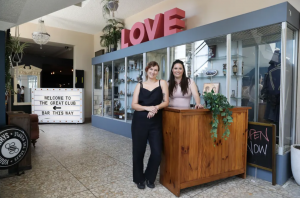 A cheer erupts at Sydney’s newest music venue, though there’s no band playing. It’s opening night at the Great Club in Marrickville, a bar and venue with a post-Covid capacity of 300, but management has decided to soft launch with a handpicked group of neighbours, local politicians and members of the Greek-Australian community.

The people, that is, who it is wise to keep on-side if a venue in a residential area is to thrive. In Sydney, especially, where noise complaints from residents carry undue weight. “As soon as we signed the lease,” says the Great Club’s director, Alison Avron, “we were like ‘We’ve got to get an acoustic report. We’ve got to get the neighbours on side’.”

Yet the cheer in the otherwise sedate room is when Victor Macri, deputy mayor of Inner West council, says “this venue is a much better use of this facility than a block of units”. His words clearly ring true for the locals here.

For the property developers too. Marrickville’s first boutique high-rise, Mirvac’s new Marrick & Co development, is a few doors down on Illawarra Road. It’s currently advertising apartments for $1.8m in a suburb it describes as “lively after dark” due to “an array of music venues, theatres and restaurants to explore”. The uncomfortable truth for venues lassoed into this “array” is their efforts rarely grease the pockets of the music-makers but of those, like Mirvac, who capitalise on the buzz.

Macri breaks it down more simply. “Council loves live music,” he says. “We all know we live in the 10th coolest place in the world. So we need places to come and be cool, and the girls are going to provide that.”

“The girls’’ are Avron and assistant director Brooke Olsen. They have a decade each of experience running warehouses, venues and award-winning radio programs; endeavours that have all been independent and grittily anchored in community. They are good mates too, having most recently hauled each other through the hardships of 2020, when Avron was evicted from her Annandale venue, the Newsagency.

They call themselves not “the girls” but “two lady tycoons”. Ladies who now run an ex-Gentleman’s Club. This large two-storey building was built in 1955 as a place where gentlemen from the Greek community could come to … well … Avron and Olsen don’t really know. How could they? The irony that a female journalist is asking two women what happened in a space that was off-limits to our foremothers does not escape us.

“Was it, like, a man’s lounge where they sit on Chesterfields and smoke cigarettes and talk about wages?” asks Olsen. “While the women were at home, feedin’ the babies?” replies Avron. “I love that we’re female-led and this is a safe space for women now. Sign of the times.”

In 1984, the Greek-Macedonian Club bought the building to house its cherished HQ, the Alexander the Great Club. For nearly 30 years, discos were danced, plates were smashed, traditional dress was paraded and slide nights of holidays home to the motherland were held. At the opening, Macri recalled: “This place is all soundproof … the neighbours never complained. They complained about all the young lads doing burnouts at 2am out the front! The demographic has changed since then, though, there’s no GT Falcons out there waiting to lay some rubber.” The club closed in 2012.

Real estate agent Aris Giotas advertised the lease in late 2020. “We were exhausted from shutting the Newsagency down but after a week vegging out, we couldn’t help looking for places,” Avron says. They expressed their interest to Giotas. As did several others. A Scottish brewery! A paddock to plate restaurant! A daycare centre! Several daycare centre applications, in fact. But Giotas, born in Marrickville and a member of the chamber of commerce, liked Avron and Olsen’s proposal most.

“He understood it,” Avron says. “I’m so grateful to him for believing in us. He told us there’s two types of Greek communities in Marrickville, those who stick with the Greeks and those who want to assimilate with all kinds of cultures. The intention of the pan Macedonian Greek community was always to combine Australian and Greek culture. They needed something to lift the club [from the traditional thing] but still honour its history.”

The five-year lease came with a rule: the new club must be caretaker of the old club’s artefacts. Marble busts and brass etchings of Alexander the Great, vintage posters of Greek gods, soccer trophies, frilly folk dancing costumes and some spectacular chandeliers. “We were like ‘yes please!’” Avron says. “It became apparent quite fast this wasn’t just Brooke and I combining our histories, there’s something further at play that we have a responsibility to honour.”

The stage will light up in March. Last week, kitchen management was taken over by the cousin of one of the Greek-Australian building owners and Avron and Olsen say they will consider Greek music as part of “a big range of things”. However, Olsen is firm that the club will be a contemporary live music venue. “We want it to be a well-known, well-respected, well-loved Sydney venue that is impossible to do without,” she says. Until then, they hope that trivia nights, $10 cocktail specials and piano-by-request evenings will begin to build a faithful clientele.

Still, you have to ask. Why open a venue? Why now? “Because we’re fucking crazy!” Avron says. “No, it’s intrinsic to who I am now. After the Newsagency people were saying ‘just get a fulltime job!’ and I was like ‘this was my fulltime job!’. It’s too hard for me to go back to anything else now – and I love it.”

As for noise and neighbours, their soundproofing work has been thorough and their door is open for chats – to a point. “We talked to a friend who runs a bunch of Sydney venues,” Olsen says, “and he said ‘Keep the conversation open but remember, you have the right to be there’.”