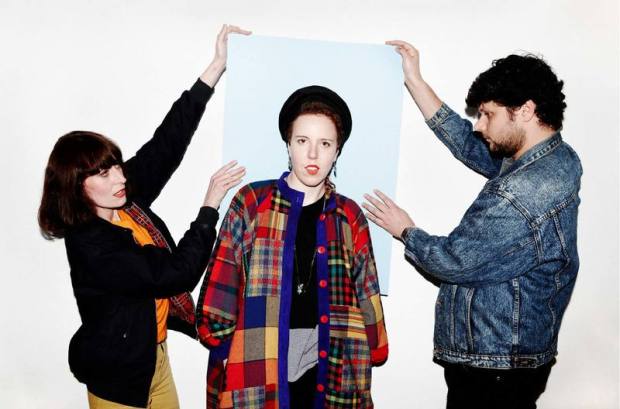 From Pulpit To Pew (Sound Summit/This Is Not Art)

A picture of the Pope is propped on a ledge behind the stage at Newcastle‘s Renew Church. People drift in from the rain outside and sidle quietly into chairs. Trapped within the cheap frame, bathed in mellow red stage lights, the Pope watches on, fading even further into weary benevolence.

It’s Sunday afternoon and the church is home to the second installment of New Weird Australia’s artist showcase at Sound Summit. It’s a dry and comforting space and there’s no reason to be here but to sit and listen. No bar, no smoking area, no swelling rumble of chatter.

Even as Alyx and Freya from Kyu soundcheck their gear, occasionally jolting earlycomers with the inevitable bleeps and blasts of the process, their aura of sweetness is incomprehensible. Incredibly, they maintain it throughout their set. The four songs, independent yet interrelated, are dominated by their idiosyncratic harmonised vocals and simple tribal rhythms banged out together on a shared drum. Kyu are proficient, albeit nervously so, with samples, keyboard and a glockenspiel. But it’s only when they turn to the drum, cymbal and mic positioned between them and sing their hearts out, facing each other and profiled to the audience, that their true power is experienced. Clicking their drumsticks together like little girls in a schoolyard clapping hands, Kyu channel Björk, Cocteau Twins, M.I.A and The Lion King with blissfully non-derivative innocence. The audience sprout fond smiles like proud relatives at a wedding.

Solo act Alps has foregone his usual assortment of instruments and accompanies his wistful folk with guitar instead. Although he only started playing guitar a month ago he’s one nine-volt battery away from pulling it off. But his pedal crackles its death-knell code through his first song; a tough way to remember to replace your batteries before each gig. Alps ditches it and braves the remaining set pedal-free. Luckily, he’s playing in a church to an audience supportive enough to surmount his technical difficulties, and attentive enough to divine the deep sense of longing that pervades songs from his most recent LPs: Alps of New South Whales and Alps of the World.

Two-piece Moonmilk loop live melodian, accordion and vocals to ghostly affect. The sounds layer themselves into a swaying atonal beauty then suddenly retreat. The music plays as an echo of itself, distant and haunting, as though heard from behind a closed door at the end of a long and shadowy hall by somebody too terrified to open it. It’s a spooky set, perfect for the church. The Pope would have been pleased.

The showcase moves to This Is Not Art‘s Festival Club, a re-purposed Masonic Hall. Blastcorp, from Darwin, is first up. He sits cross-legged near the edge of the stage, long dreads nearly touching the floor at his knees, a monome between his folded legs. The crowd, many of whom have shifted directly from church to club, are still shifting gears and mostly sit on the floor as well. Blastcorp’s first song encourages seated appreciation with its sweetly pitched vocals and harp samples. Then, he says: “It’s time to raise the BPMs. It’s rave time.” A bass-heavy techno set follows. Not so well-suited for the brevity of a showcase gig which is, of course, entirely the point.

Castings take a long time to set up. Expectations are high. They begin and Nick Senger roams the stage shirtless as four guys in muddy-coloured hoodies crouch stage left fiddling with equipment on the floor, backs to the audience. It wraps up soon after. They’ve all been short sets but this one is the shortest. The crowd modestly bay for more, motivated I sense, by curiosity rather than fervour. “Do you have any idea how much that makes us not want to play more?” Senger spits. No, not really. No-one threw their underwear. What’s the problem here? “There’s no fucking way we’re going to play more now!” he repeats. People shrug.

Crouched together, reigning over an assortment of vocal loop pedals, Gugg look like time froze the day Cobain died. But they don’t play grunge. Gugg loop vocal yelps and nonsensical word patterns such as “chicky chicky”, peel the distorted loops into danceable terrain then plunge it all back into chaos again. Playful, wonderful and dreadful. Music-makers in the crowd shake their heads regretfully wondering why they didn’t think of doing it themselves.

The short sets have been fun, but by the time Holy Balm hit the stage the Festival Club crowd – already at capacity – are ready to dance long and hard. The rain beats down outside but the hall is steamy-warm. Beer flows, old friends chat and acquaintances long-intended are made. As the set progresses the area in front of the stage gets weirder and weirder as people gravitate inwards to marinate together in the psychedelic dance jam cocktail that is Holy Balm. People start to swarm the stage. The bearded guy from comedic experimental act Bum Creek pitches in to the jam by banging his guitar case shut over and over, while another fella dances around onstage with his hoodie pulled closed, blinded, with his arms in the air. Treadmill performance artist Mr Let’s Paint TV (John Kilduff) leaps onstage and starts doing the running man. People laugh hard and dance harder. Holy Balm ride it out with only small looks of bewilderment at what they’ve cooked up.