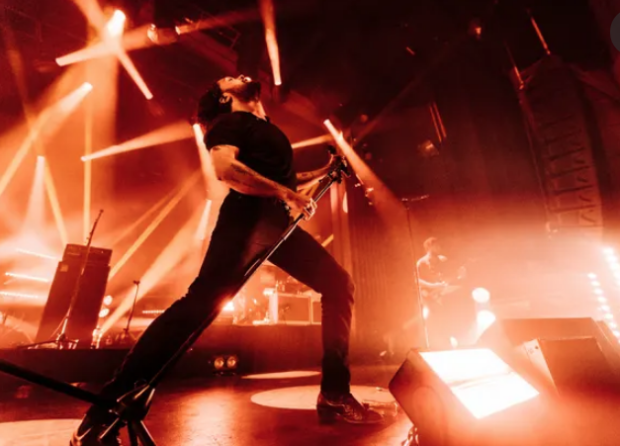 Gang Of Youths (The Enmore)

On Sunday, Gang of Youths’ frontman David Le’aupepe checked out of social media “for a bit” – though not for the first time. On Wednesday, the first concert of the band’s heroic six-night run in their hometown of Sydney was cancelled due to “our David’s” chest infection.

The band had played eight sold-out gigs at the Forum in Melbourne already, not to mention other cities. Running yourselves ragged at medium-sized venues instead of slamming it home at a stadium is what real rock ‘n’ roll bands do, you see. Especially bands who owe Australia, as Le’aupepe said on Thursday night, “an extended, elongated and perhaps lifelong debt of gratitude for what it’s given us”. Including, presumably, the 2017 Aria best album award for Go Farther in Lightness, the album the Say Yes to Life tour is all about. On news of Wednesday’s cancellation a friend sent me a “poor Dave” text. “I guess it’s what happens to true rock stars,” she wrote. Sickness, yes. The rest, not so much. Le’aupepe’s personal narrative of love, tragedy, alcohol abuse, attempted suicide, sobriety and redemption neatly fits the true rock star mould but his “approval addict” confessions do not.

Rock stars can’t be caring what people think, Dave! What great rotting untruth will keep all the wheels on then?

Yet Le’aupepe is either unwilling or unable to pretend he doesn’t care. Or is not wracked, on the reg, by self-doubt. “You crave the applause yet hate the attention/Then miss it, your act is a ruse,” he sings on the aching elliptical arc of Achilles Come Down. He won’t contain his vulnerability within the safe space of song and stage either, like most rock-dogs do. When asked at SXSW in March by music journalist Poppy Reid about the band’s performance on Late Night with Seth Meyers he said: “It was terrifying. It was so scary. It was fucking scary.”

On Thursday night, poor Dave’s all blocked up. Can’t hear a thing, he says. “I swear I just heard a woman yell ‘Go Captain Cook’,” he says. He can still sing beautifully though, even solo on piano, silencing the room with Persevere followed by a cover of Joni Mitchell’s A Case Of You.

He can still dance too, and his silhouetted moves to the motoric groove of Let Me Down Easy – set to the flicker of marmalade-coloured lights – is all camp and coquettish and Elvis’s loose hips; equal parts male, female and all the freedom between.

Like the album, the concert goes through cycles and though the band are note-perfect all night they’re best in these transitional phases – easing us smoothly from ballad to bombast with reverberant guitar notes or the hypnotic hush of cymbals.

Le’aupepe, meanwhile, shares lots of stories – about his Samoan father and his Polish immigrant grandparents who fled Nazi Germany to settle in Australia – but it’s his unmapped banter that brings his honesty home. After playing an original, he says: “If you wanna know where I lifted that from go and listen to Cactus Tree by Joni Mitchell.” Then looking down onto the faces even younger than his own staring up, adoringly, he adds: “That’s spelt J-O-N-I, OK?”

In moments such as this – a deft undermining of his own band’s originality – Le’aupepe bereaves me of any potential critique as I find myself instead utterly swept up in the concert’s central mantra: saying yes to life.

Saying yes is the only way to do Gang of Youths, a band that offers no hiding places or half measures. On record, the dictatorial nature of Go Farther in Lightness’s songs – epic rock that insists on you being relentlessly roused – can wear you right out. But experienced with other people, together, heart wrenched open, it works a charm.

Everyone at the Enmore is all in. We’ve got women in their 50s, kids with their parents, couples on date night and lots of men with gym-thick torsos singing, swaying, dancing, crying and hugging it out in a show that oozes into one of the most uninhibited outpourings of joy and emotion I’ve attended in recent times. Kudos to the Enmore and its staff for letting it flow, too, and not scolding us back to our seats when the back half of the theatre’s crowd spills down to fill the middle section’s alleys and slopes.

The show’s only flaw – when Le’aupepe mumbles his way through the first two verses of the record’s best song, Do Not Let Your Spirit Wane – is alchemised into a strength when the crowd fills in the soft spots for him.

Which leads me to the concert’s most miraculous twist. When we sing, we sound good. No, we sound great. And in a moment I won’t forget, at the end of Keep Me In The Open, Le’aupepe starts us off. “And I deserve better than this,” he sings, the “I” a lovely tumble of undulating vowels. Then he pulls back, stands in the dark, and as a choir we usher the song home. Together we are the “I”. And yes, maybe we do.