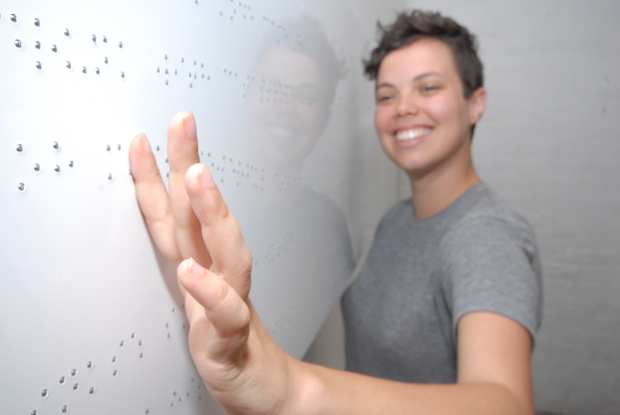 First published in The Brag February, 2010

Like straining to hear a salacious conversation on the train, the three works in Geometries of Attention don’t come easily, but they bring thrilling, furtive pleasures.

It’s opening night, and quizzical people roam Serial Space in Chippendale. The three poetry works on display only unravel if you touch, play or move with them, so a pre-occupied air infuses the room.

“Without interactivity,” say the artists, Astrid Lorange and René Christen, “the poems exist only as fields of potential”.

On one wall is a stark, white, rectangle. A series of tiny, metal nodules form a Braille-like pattern across the surface, revealing nothing but inviting touch. When I run my finger over the Braille, an almost indistinguishable tickle of current is transmitted and snippets of a sound poem sing out. Several people listen, heads cocked, waiting to touch.

So, I move on. Clutching an FM transmitter, I wander the space, wearing headphones, as poetry fragments bloom and fade through the static.

a shelf of chess strategies

Next. Five people slide five wooden discs across a low, flat screen. As the discs move, stanzas stream and swirl in their wake, the words sometimes coalescing long enough to read, sometimes scattering too fast.

As I try to weave the poems together, my friend tries to decode the electronics.

Nerds, language-lovers, people who very much like to eavesdrop: all will enjoy this show.